Matteo Garrone’s ‘Dogman’ is a story of love and tragedy in the life of an ordinary man. The ordinary man caught between the love of his life, his only child, and a local gangster who embroils him in carrying out petty crimes. It’s a gritty drama set in the rural ruins where Marcello (Marcello Fonte) is pushed to the lowest abyss of meekness and desolation. It’s a gradual breakdown of a common man’s conscience. 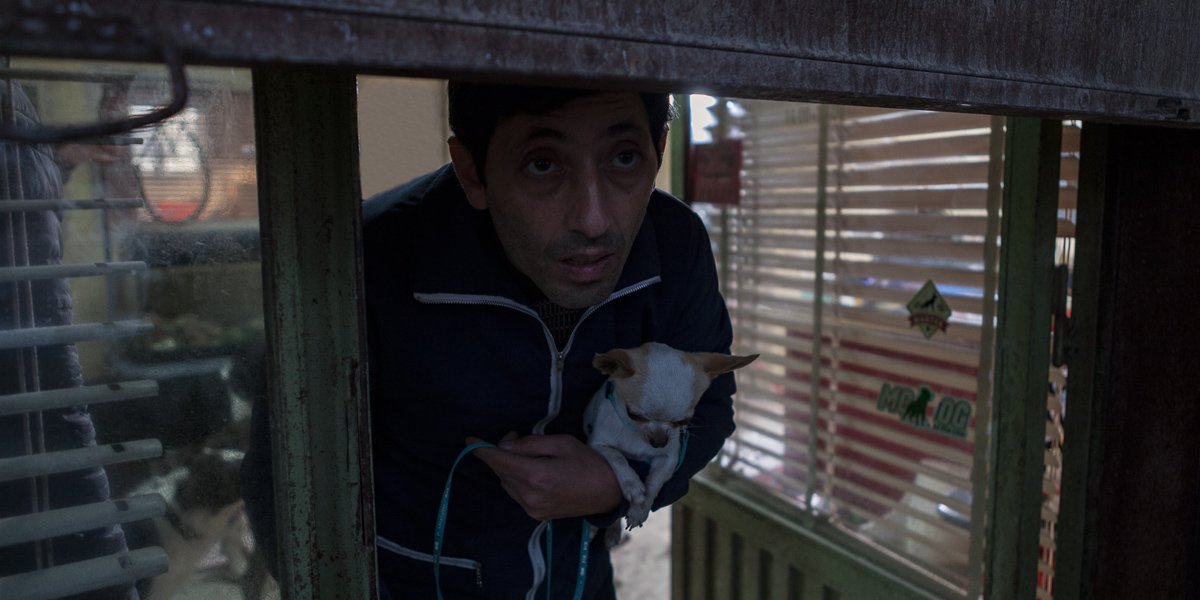 A hyper-realistic crime drama that patiently deconstructs the relationship of oppressor and suppressor that spirals into a brutal retaliation to reveal the violent side of human.

Matteo’s film is deeply rooted in the society governed by corruption, fear and vulnerable morality. Marcello tries to balance his righteousness and corruption while not making his fear clear. Marcello is a dogman who cleans and grooms dogs for a living. He is a gentle and composed middle-aged man whose innocence reflects in his bulgy eyes. He is a shy person who never takes a stand for himself. He is a perfect example of a beta male who lacks confidence and seem innocuous. Slouched back and droopy shoulders imply the emotional baggage he carries.

“Dogman” is a straight-forward revenge saga of a weaker man in a rural blight society browbeaten by drug-addicted, local goons. One of them, Simoncino (Edoardo Pesce), shares the taste for cocaine as Marcello does. Simoncino is brutish and invincible. He is a monstrous figure, volatile and unpredictable in his sluggard movement and self-centric. Drugs could ease him off.

Must Read: THE HEIRESSES [2018]: REKINDLING THE LOST DESIRE.

Marcello believes he could tame Simoncino the way he tames large aggressive canines. They form a symbiotic relationship as Simoncino had a fall out with the drug supplier. Marcello supplies drugs to callous Simone to make extra money. His association is subservient in nature. He serves as a gateway driver for petty thieveries in return of the marginal share.

Simmering under it is a story of a devoted single father whose immense love for his doting daughter cripples his morality and decisions. He often takes her to an exotic trip for scuba diving, while the rest of the time, they extensively plan together for their next trip. Money doesn’t matter, Marcello has tricks up his sleeves to arrange the money.

Marcello’s patience of the saint comes crumbling down after Simoncino turns hostile on his returns from the prison, that Marcello served on behalf of Simoncino’s crime. Marcello’s rage soon turns into petty revenge that he vents out by damaging Simoncino’s sports bike. Simoncino’s brutal attack on Marcello violates their sycophant association. It leads to slandering of his dignity and power among his neighbours, leaving him on his own.

The dynamic between the two men shows the oppressor (alpha men) and suppressor (beta male) duality that is, often, seen in the societies in a different form. Be it government and public, corporations and employees or be it within the family.

Matteo Garrone’s ‘Dogman’, Italy’s official submission at The 91st Academy Awards for Best Foreign Language Film, is a tragic story of a sycophant and beta man painted with acute somberness. The fragile ecosystem bears a crack when he runs out of patience and loses his self-respect as collateral damage. Marcello Fonte mellow performance lifts the weaker patch of the narrative and makes it intriguing solely with his eccentricities. He brings the charm and beta-male vulnerability to his character effortlessly. His transition from growling puppet to a great Dane is heroic but within the emotional realm of practicality.

“Dogman” was screened at the 2018 London Films Festival.