Severance (2006) is a British-German comedy horror film co-written and directed by Christopher Smith. It follows a group of people on a team-building weekend trip to a “luxury lodge” in the Mátra Mountains of Hungary. But they realize that the lodge is not luxurious at all, there are cabinets full of cryptic Palisade documents, and they find a human tooth in the meat pie they were having for dinner. Later on, it’s revealed that they are on the hunting ground of a group of poachers and it doesn’t end well for most of them. So, in summary, it’s The Office (2005-2013) meets Wrong Turn (any one of them). Spin Me Round (2022) aims for a similar vibe and just never goes all the way with its absurd premise.

Directed by Jeff Baena and co-written by Baena and Alison Brie, Spin Me Round follows Amber (Alison Brie), the manager of the Bakersfield branch of an Italian restaurant chain. She lives a pretty mundane life and is apparently good at her job. One day, her supervisor Paul (Lil Rey Howery) tells her that she’s going on an all-expenses-paid trip to attend the franchise’s educational immersion program in Italy. She’s joined by Deb (Molly Shannon), Jen (Ayden Mayeri), Dana (Zach Woods), Fran (Tim Heidecker), and Susie (Debby Ryan). The red flags start to appear when Craig (Ben Sinclair), who is kind of the chauffeur, takes away all of their passports and then puts them up in a shabby hotel instead of the villa that they were promised. And things become particularly shady when the CEO of the franchise Nick (Alessandro Nivola) and his right-hand woman Kat (Aubrey Plaza) show a weird level of interest in Amber.

Spin Me Round’s biggest asset is its cast. Alison Brie has an incredibly magnetic on-screen presence. She has such mastery over her vocal inflections and body language that she effortlessly transforms into this uptight restaurant manager who is inclined to break free from her self-imposed shackles. Her chemistry with every single member of this film is so natural. After her, it’s Zach Wood, Molly Shannon, and Tim Heidecker who absolutely steal the show. Shannon is a comedy movie veteran and she portrays Deb’s ignorance towards privacy and her violent mood swings so perfectly. If Heidecker’s Fran is the epitome of fake confidence, Woods’ Dana is on the opposite end of the confidence spectrum. And they stand out individually and while playing off of each other’s energy. Mayeri and Ryan shine in the few scenes they’re in. Sinclair’s dry deadpan humor is amusing. Plaza comes like a storm and leaves abruptly. Nivola turns up the charm to eleven and then gets to strip it away in a hilariously pathetic fashion. 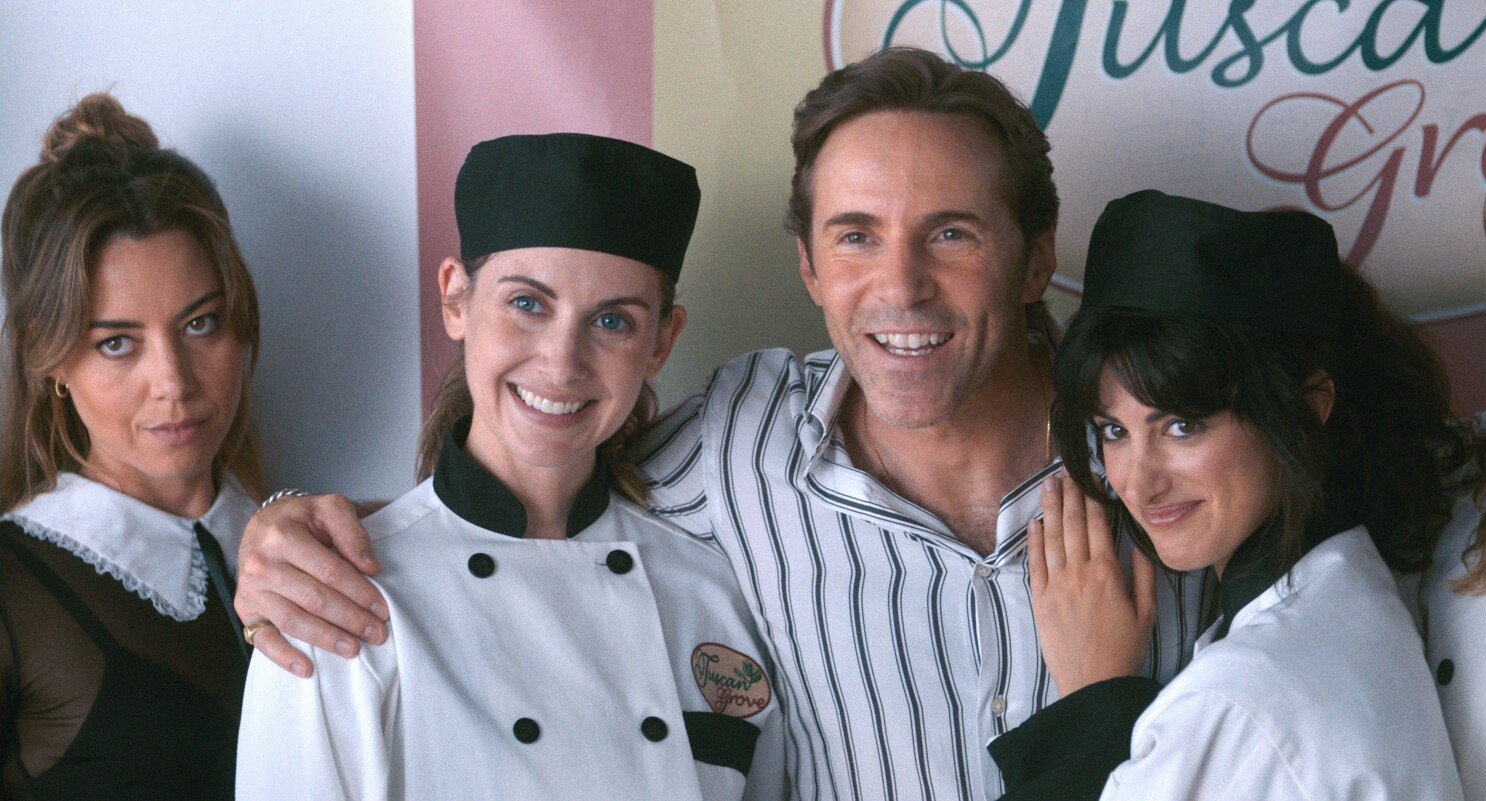 Now, going by the committed performances, it seems like the cast would’ve been more than okay to take things a notch higher to ramp up the tension of the mystery around this “vacation” and let the comedy flow from the characters’ misery. But unfortunately, Baena and Brie aren’t quite interested in that. Because Baena keeps things weirdly sanitized although Nick misusing the unfair power balance between him and his employees is pretty dark. Then Spin Me Round keeps alluding to a sinister sub-plot that involves kidnapping and prostitution. Brie and Plaza’s brief relationship is framed like their love is forbidden. However, all of it is coated with this layer of “fun” and “levity”. After that, the concluding minutes happen and Spin Me Round goes into all-out nudity and violence. And even that is made to feel inconsequential and “comedic”. Why? Why pull back throughout the film and throw a forgettable curveball at the end? Why not just have the tone of said curveball course throughout the film? Why be so tonally inconsistent?

On a technical level, Spin Me Round is tight. There are no moments where the movie drags, thanks to Ryan Brown’s editing. Cinematographer Sean McElwee conjures some pleasing visuals during the day and some surprisingly impressionistic ones at night. So, yes, the movie flows pretty steadily and you won’t find yourself stressing your ability to pay attention. But, intentionally or unintentionally, the movie’s subtext remains unclear and hence seems a little problematic. Before the big twist, Spin Me Round shows men to be assertive and charming and women to be submissive and ignorant of the power imbalance. The women who are assertive are characterized as insane or are largely absent. And the men who aren’t conventionally manly are portrayed as bumbling idiots who are still subtly sexist. The movie then pivots to make a point about Amber growing out of her shell. However, that’s so little so late that the message comes off as a warning to not seek adventure and be as conservative as possible. Protest, yes, but within your mediocre surroundings as that won’t bring actual change.

Or maybe I’m overthinking Spin Me Round and it is just an average movie about a vacation that almost goes wrong but doesn’t really. If you are looking to see comedy mysteries where things go deliciously wrong, seek out Severance, Sissy (2022), Midsommar (2019), Old (2021), Us (2019), The Cabin in the Woods (2011), or The Evil Dead (1981). There’s no particular reason to give Spin Me Round a miss. But there are no solid reasons to watch it as well. So, if you have approximately 100 minutes to waste, you can check out the Alison Brie and Aubrey Plaza starring film or watch something better.

Spin Me Round was screened at the SXSW Film Festival 2022

Bromates [2022] Review: This tone-deaf comedy has nothing to redeem itself

Emily the Criminal Movie Ending, Explained – What Happens to Emily?