These days, we often see films pushing their genre-defined scope and becoming more than what their genre would outline. It does not mean that great films cannot come within the limits of a particular genre,. But it is quite refreshing to see the overlapping of genres too. Modern thrillers often employ this blend with drama, where they become a testimony of human emotions while playing with the elements of Mystery and Thriller. Iranian Oscar-winning director Asghar Farhadi’s films often have this perfected overlap. A seemingly mysterious and thrilling event triggering complex human emotions and interactions between the characters.

Malayalam film Kaanekkaane, written by Bobby and Sanjay, and directed by Manu Ashokan is a film in that same mold of a drama thriller. It, on one hand, is a well-constructed layered thriller; and on the other hand, an evocative drama featuring characters riddled with complexities.  Such an endeavor often carries the risk of being weighed down by its own possibilities. However, the creative team behind Kaanekkaane, do not take a false step anywhere and mostly presents a nuanced film, akin to the films of aforementioned Mr.Farhadi. 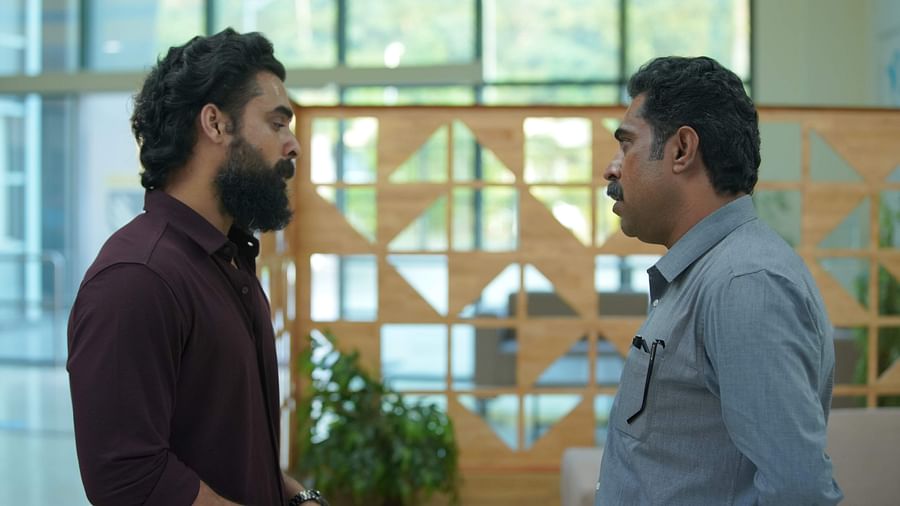 Like any good thriller, the film engages the viewers almost immediately. Within five minutes, the audience would feel the tension and mystery of the characters. It starts with Paul (Suraj Venjaramoodu) paying a visit to his son-in-law Allen (Tovino Thomas), in order to meet his grandson. In Allen’s absence, Allen’s second wife, Sneha (Aishwarya Lekshmi) receives the father-in-law. The film reveals that Paul is the father of Allen’s first wife, Sherin (Shruti Ramachandran); and Sherin died in a hit-and-run accident almost a year ago.

Now, films in India often have a tendency to throw all this information on the audience’s face, especially if they try to do it in fifteen to twenty minutes. It was fascinating, to say the least, to see Kaanekkaane smoothly avoid that. Manu Ashokan crafted the scenes together in a way that all the necessary information would be grasped by the audience, without actually telling them. The first fifteen to twenty minutes were gripping, palpable with grief and a possible mystery underneath.

Related to Kaanekkaane: 25 Greatest Malayalam Movies of All Time

Without revealing anything further, the film largely maintains the same taut grip on the mystery. While it explores the psyche of its primary characters, especially that of Paul and Allen. As Paul traversed through the fateful incident of her daughter, he peels layers of façade that would eventually lead him, and resultantly Allen, to confront the bitter truth. And the truth would, biblically speaking, set both of them free; free to choose their respective course of actions.

Kudos to the team of directors and writers for the apt and seamless usage of flashbacks. The flashbacks were not just used to deliver necessary information, but they were the pregnant pauses after each implied chapter of the narrative. It was particularly responsible to establish the unusually once-friendly bond between the father-in-law and the son-in-law. This bond is the cornerstone, on which the film moves backward and forward.

The film leans towards melodrama, and after the revelation of truth, it starts to reach its climax. But, that transition is mostly natural and not handled too heavy-handedly. It was inevitable, to be honest, and quite a prudent decision from the director, as he had a team of quite amazing actors. It was wise to let the actors do their job on screen with some more dramatic moments.

Related to Kaanekkaane: Great Malayalam movies of 2020 and where to stream them

Suraj Venjaramoodu turns a superlative performance into the brooding, and then the vengeful father of a dead daughter. As the film revolves more around Paul, Venjaramoodu is the one who has to do the bulk of the work. However, Tovino Thomas is not far behind when it comes to sharing the load. His distraught and disheveled Allen is the perfect opponent of Paul. Aishwarya Lekshmi also deserves special mention for her portrayal of Sneha.

Music, especially the background score, by Ranjin Raj also deserves plaudits. The score aptly accentuated the moments on screen, especially during the thriller phase of the film. Alby’s camera work is subtle and pleasant to look at. Kaanekkaane would have to be one of the rare Indian thriller drama films that are largely successful as both of those genres.

Kaanekkaane is now streaming on SonyLIV

The Great Movement [2021]: 'Venice' Review - A character study of the ignored individuals of a city