Squid Game (Netflix) is the name of a childhood game played by children of South Korea in the playgrounds, with rules eerily similar to Kabaddi. Creator Dong-hyuk Hwang wants to evoke a sense of nostalgia, while also giving these children’s games a far more sinister bent throughout this 9 episode Netflix series. More than a hundred people who are facing financial difficulties at various stages, with millions in debt, are invited to an island to participate in children’s games. The prize money would be a whopping 45 million dollars.

It sounds tempting and eerily too good to be true, and even the characters who are invited feel the same way. Disillusioned by their life they are unable to look at a gift horse in the mouth, their suspicions aren’t easily assuaged when they see the guards dressed in complete red overalls and black masks with a symbol of either a triangle, a circle, or a square. If you are getting Money Heist vibes from these aesthetics, that is intentional but also only aesthetic.

Related to Squid Game (Netflix): 5 Films to Watch If You Liked “The Stronghold” on Netflix

The prize money forces them to allay their suspicions and approach a game of Green Light and Red Light, with a seven-foot doll-shaped robot acting as the girl standing at the tree muttering Green Light with her eyes closed, and then calling out Red Light. The rule traditionally would be to cross that tree line, but when the girl calls out Red Light, the players would stop and pretend to be immovable. It’s all fun and games, an easy way to earn money in this context.

The catch is that girl is a robot; her eyes are fitted with a motion detector. If those eyes detect movement, the player would be eliminated. Or in this case, shot to death by snipers. If this type of sinister bent of children’s games, leading to carnage and violence sounds appealing to you, you are in luck. Squid Game (Netflix) spares no expense in ensuring that the viewer is just left agape at the events unfolding on the screen. But the violence is not just for the sake of it, to show gore and splatter.

There is a pointed note of commentary here, the class divide between the ultra-rich and the poor. How the hapless lives of these normal folks failing in life become fodder for entertainment for the rich. How money becomes such an incentive that it forces men to make difficult and frankly insane choices over and over again. Even in the constructed reality of this island, the players are invited to, the common psychology of human beings to form teams for survival, to kill each other for the sake of survival is shown, and even exploited by the people running this constructed reality of a game show. 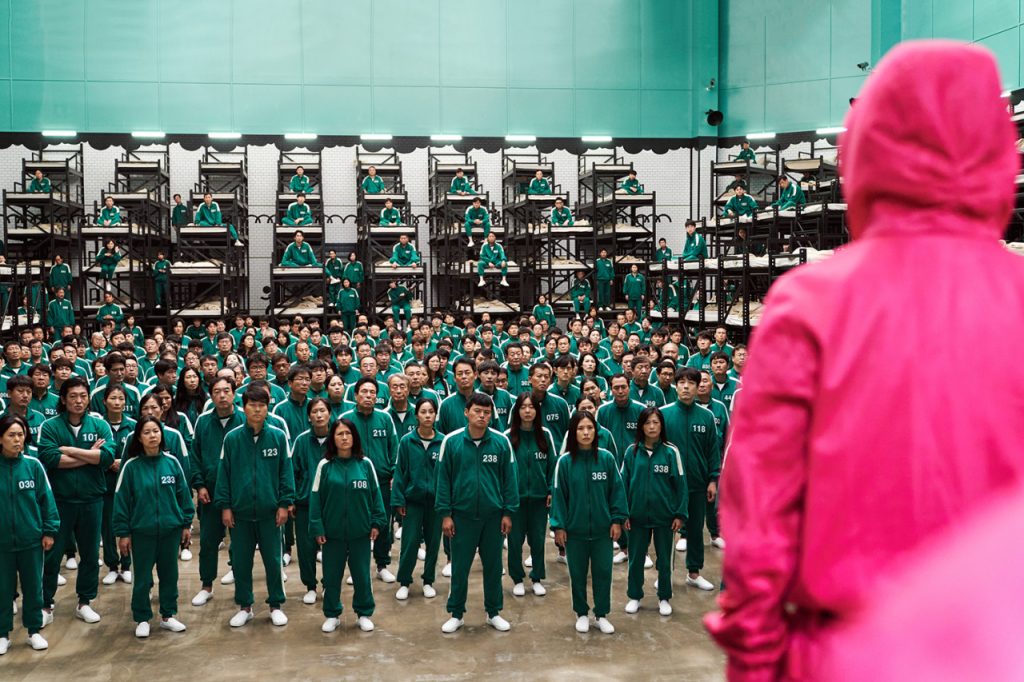 What makes Squid Game (Netflix) even more frightening is that it doesn’t take place in the near future, but distinctively in the present. The first 3 episodes are dedicated to showing the hell faced by these hapless individuals at the island in the first go, but when they finally decide to return home, the hell-scape they return back to in the form of their personal lives forces them to return to the island again, a shiny lure promising them a way out to salvation they can only dream of. The economic disparity shown between the different classes is ridiculous and frightening, but altogether real, which does help the show to be grounded.

The show does falter at some key moments. At 9 episodes with 8 of them running an hour each, Squid Game (Netflix) is frankly too long an affair. It also doesn’t help that the show takes its sweet time getting to the meat of the conversation, and even while it is diving deep into the striations of said meat, it tries to hammer its point one too many times. The viewer strains to keep interest in the human drama, instead of focusing on the ludicrous nature of the set-pieces, which the show succeeds in quite well.

Not all of the subversion of the games works. While some like the tug of war, or glass and stone bridgework in fulfilling a sense of dread, the episode focusing on the game of marbles is flimsy and frankly feels underdeveloped. Contextually it is a character-focused episode, but even those character moments feel redundant at times, and the pacing issue is in full force in that episode. The subplot about organ trafficking initially felt like a novel wrinkle, but in hindsight stands out as completely unnecessary.

Squid Game works the best when it completely commits to its ludicrous premise and leans heavily into the violence and campy nature of the said premise. Even the final resolution feels campy and comic book heavy, the villain explaining how everything happened at the end. The production design, dressing the corridors and staircase like a dollhouse, or constructing a makeshift playground gives you almost a tonal whiplash – you are filled with nostalgia until one of the guards shoots a player in the head, and his dead body slides down the swing.

Imagery is important for allegory as well as shock value, and Squid Game (Netflix) is nothing if not strong in allegory and in shock value. It’s delving into melodrama, romantic subplots, gangsters in real life converted to schoolyard bullies feel like extraneous pieces of the jigsaw puzzle until you see the full picture and the pieces fall into place. I only wish that the jigsaw wasn’t as unwieldy as it turned out at the end.