In Decoupled (2021) on Netflix, one of the least enjoyable shows this year, most of the jokes do not land and the creators forget that it is the 21st century.

In one of the meetings that Arya and his filmmaker friend, Mayank, have with Netflix, they are reminded that the scenes that they had shot and sent to them for a new show do not fit well because “we are not in the 20th century” anymore. Unfortunately, the show seems to forget this important piece of advice in their writing. Netflix’s latest, Decoupled, an eight-episode long TV show created by Manu Joseph and Hardik Mehta proceeds to untangle the strands of marriage between one of India’s bestselling authors, Arya, and his wife, Shruti, as personal and societal absurdities unfold around their affluent life in Gurgaon. It throbs with the potential of a great societal satire but is hindered by the brand of humour that Manu Joseph, popular Indian English writer, journalist, and columnist, fosters through his protagonist and spirals into blasphemy.

The plot is rather simple. Aarya, played by R. Madhavan, and Shruti, played by Surveen Chawla, are stuck in a dead marriage. However, they take time to decide whether to go forward with a divorce for their 12-year old daughter, Rohini’s sake. After a series of resentments and failed efforts to patch their marriage together, the couple decide to throw a party in Goa to celebrate their decoupling or getting out of marriage. After five episodes, when the idea of this decoupling party was introduced, it was relieving but a little too late to reinvigorate my interest in the plot anymore. 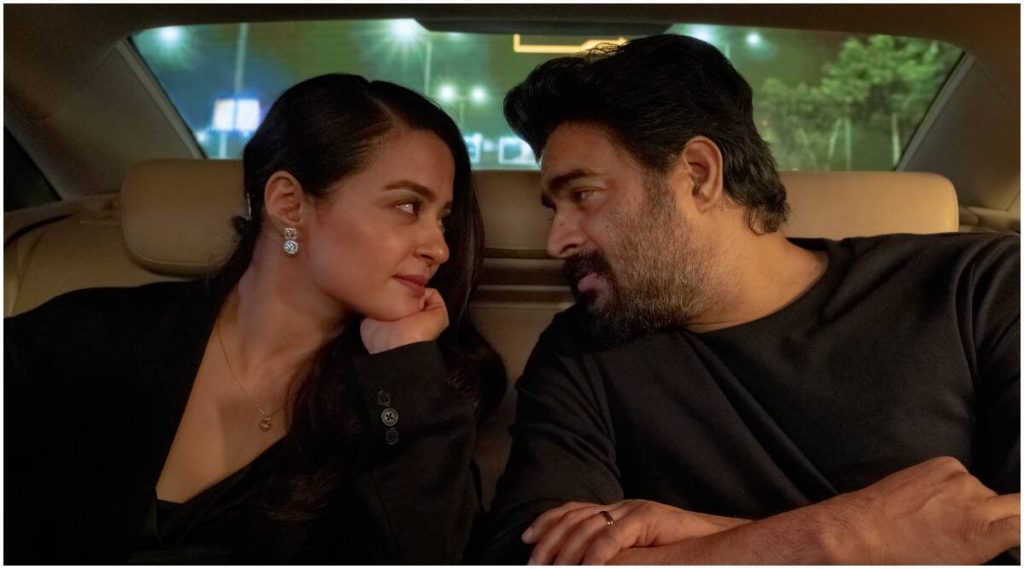 To complicate matters, both Arya and Shruti have their own shares of desires and personal and professional hassle to take care of. A fine strand of metaplot runs throughout the show about Netflix desperately wanting to work with Arya. I use the word ‘desperately’ because it seems like no amount of disrespectful behaviour and arrogance on Arya’s part can deter them from their decision. The show is further sprinkled with subplots and characters ill-treated for the sake of a satirical effect. However, these plots do not come together to form a rich tapestry. Each episode seems indistinguishable from the other due to the repetitive pretensions about economic class, sex, and, most importantly, women. Marriage, one of the key themes, suffers heavily under the burden of these commentaries, and we are left with only one practical input about how a years-long marriage unfolds to an anonymous person.

Arya is clearly the character that receives the maximum amount of attention because he acts as the mouthpiece for Joseph’s unabashed criticism. Every available description of the character on the internet calls him a ‘misanthrope’, someone who is cynical about everything in human society. However, nothing explains why he is outright rude and seemingly derives perverse pleasure out of exposing the truth in crude terms at gentile gatherings. For example, his idea of gifting a gold chain to Masha, in exchange for sexual pleasure, and his blatant use of the term OCD to retract himself from a hug because he spotted armpit hair on a woman are outright problematic. If the creators intentionally drew this character keeping in mind a middle-aged, sex-starved, boomer, then they did a commendable job. R. Madhavan succeeds in bringing out the general disgust that the character of Arya is supposed to evoke. However, the character has no fair sides to compare his flaws against, and we are left with a unidirectional prick for a show’s hero.

Related to Decoupled: Marriage Story (2019) ‘Venice’ Review – The Melancholy Of Love And The Chaos Of Divorce Through Baumbach’s Lense

Arya’s wife, Shruti, is dealt with like all women are dealt with in the show – in terms of beauty, sex appeal, and desire. I almost forgot from time to time that she is a working woman since she seems to be at home or at community parties most of the time, and when she is at the office, the only work seems to be roping around their investor, Mr Lee. While we are moved to sympathize with her for having to put up with a husband like Arya, we cannot deny that she is always selfish and running away from confrontations in her own ways. Chawla effortlessly carries the role upon her shoulder, letting it slip once in a while, like her spaghetti-striped black dress when the shallow depth of Shruti’s character portrayal makes her run out of expressions to wear.

Most of the other characters in this show are stereotypes turned into hyperboles. A Korean character is constantly referring to the Bong Joon-Ho film, Parasite, and a spiritual guru is flaunting his knowledge of women via internet applications, like Follow. My favourite stereotype, however, is Mr Basu, played by Mir Afsar Ali. He is a renowned economist who is always full of the dialogue about economic classes and the liberal attitudes towards them and finds himself in situations that challenge his ideology and his lifestyle. However, the stereotyping goes too far, and the content of the show turns problematic. Episode five, for example, is unabashedly derogatory towards women, dividing their hotness quotient on the basis of their bodily structures. What’s worse, the judgment of this ambiguous quotient rests upon what Arya and company thinks and makes of women. Even the commentary on the socio-economic classes plays out well in the beginning unless you realise that that it is far-fetched and probably suited only for an audience in ivory towers.

Also, Read: All Spider-man Movies Ranked From Worst To Best

The writing of the show reeks of Manu Joseph’s typical conscience and fails to produce the desired effect. Even the little catfight between the bestselling authors, Arya and Chetan Bhagat (who plays himself) seems too made up to feel real. The writing would probably feel a lot more convincing if one were reading a book, especially a bit about the usage of complicated English words in books of Indian writing in English. It does a great disservice to the background score and the graphics of the opening credits which cosy you up for a whodunit mystery only to land you in the middle of shallow satire.

Decoupled alarmed me; it should force us to stop and think about the nature of content that is now streaming on the OTT platforms because of a spike in the demand for creative content to constantly be able to engage the audience. It makes us smirk, albeit occasionally, but at what cost? You will either hate the show or love the show depending upon whether or not Manu Joseph’s shallow but grouchy outlook at everything goes down well with you.

Decoupled is now streaming on Netflix

The Whistleblower (Season 1) SonyLIV Review: The faltering narrative works only when focused on the scam