Paul Schrader’s ‘ First Reformed ‘ follows a spiritual collapse of a pastor in the wake of his son’s death. And his crisis of faith deepens when a radical environmentalist raises a question cutting in the religious belief even deeper. First Reformed is heartbreaking and equally frightening, while the unsettling narrative landscape is painted in muted colour, giving no hopeful cracks on the wall of despair. Paul even further intensifies the pain employing a 1:1 (box type) aspect ratio, giving no breathing room to the characters, and making it look claustrophobic. 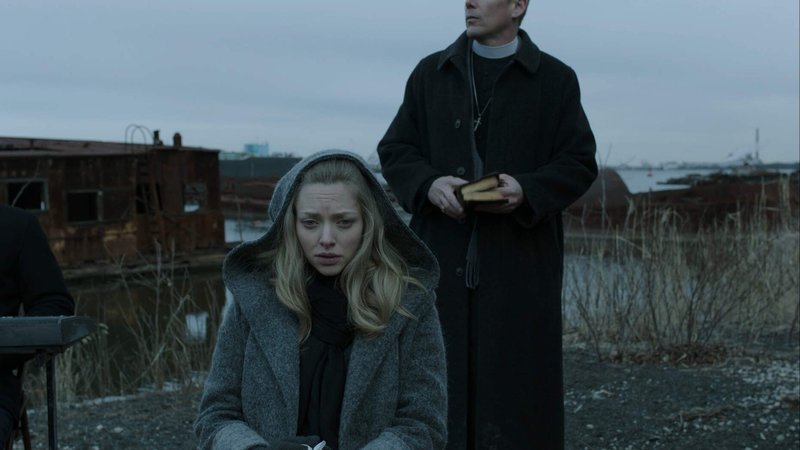 Weighed down by guilt and soaked in drinks, Reverend Ernst Toller (played by Ethan Hawke with unflinching devotedness), a former military chaplain, finds his faith in religion and courage questioned. The spirit is crippled by the relentless pain in his heart and mind after he lost his son in the Iraq war. The weakened soul finds no respite in prayers, no love among his people, no peace in the church. His wife left him for good. He is ‘God’s lonely man’, the reincarnation of Travis Bickle, who deals with his incessant suffering by writing down a journal about his naked feelings of day to day life. He essentially embarks on a “death trip” as stated by Paul in his interview to VOX.

His spirit & faith in religion is further put to a test when a pregnant parishioner, Mary (played by Amanda Seyfried) requests him to counsel her radical environmentalist husband, Michael (played by Philip Ettinger), to talk him out from aborting their child. He patiently & rationally argues how can he bring the child into the world that is plagued by ignorance to the incessant deteriorating environment.

During the counselling session, Michael asks Toller, “Can God forgive us for what we’ve done to this world?” The question lands deep in Toller’s consciousness and it catalyses an irreversible change in Toller. And Michael’s suicide on his watch hit the final nail in the coffin. The event, coupled with the physical pain he is experiencing, inflicts the insurmountable suffering where Toller’s hope is dangling against the abyss of despair.

The event gravitates the change in Toller’s consciousness towards the concern about the environment. He chooses the path of suicidal glory for his salvation to his suffering. He becomes a Christ-like figure to save the environment, and thus the humanity from extinction. In its most audacious climax, Toller is first seen wearing the suicidal vest, along with barbed wire wrapped around his chest, under the cassock, which becomes the crown of thorns for him. He plans to detonate it at the anniversary service for his church, where the CEO of Barq, one of the major environmental polluters, will be present. Presence of Mary in the Church makes him drop the plan, and instead, he pours Drano into the glass to consume it. His incapability to harm Mary in a way reveals a great deal about his relationship with her.

If we consider, for a moment that Toller is not dead, he is still alive when Mary “magically” appears in the room (could be a divine intervention), which was locked from inside, as evident when Pastor Jeffers tries to open it earlier. “First Reformed” transcends into a subtle love drama, putting abuse of environment issue at the backseat, and redeeming our lead protagonist by giving him a sense of belonging, his first human connection that compels him to care for someone, for the first time after he slipped into the depths of loneliness & crisis of faith. But, to the contrary, I believe Toller drank the vicious and ugly looking Drano, and he sacrifices himself for the greater good of the environment, wallowing in the suicidal glory to achieve salvation.

Men (2022): A Lush Allegory That Does Not Skimp On Scares