I Am Mother available on Netflix

There are tautly constructed dystopian sci-fi films that offer (profound) intellectual and emotional interrogation of the human condition and the myriad factors threatening the race’s existence, from apocalyptic environmental catastrophe to AI take over. Then there are films which are utterly derivative and yet manage to grab the audience’s attention through WTF moments and some decent action. Netflix’s latest original movie I Am Mother (2019) clearly belongs to the latter category. It pumps engrossing twists into a stale, familiar narrative of humans (or women in this case) vs robots in the post-apocalyptic world.

Australian film-maker Grant Sputore’s debut feature tackles interesting themes (including our increasing trust on A.I.) but dramatically, it falls well-short. ‘I Am Mother’ definitely impresses us with its technical features and casting choices. Although it’s not a ‘Moon’ or ‘Monster’ or belongs to those categories of high-concept sci-fi whose ambitions surpasses its shoe-string budget.

The film opens on a re-population facility after the human extinction event. A single robot runs the facility that happens to house thousands of human embryos (63,000 to be exact!). The robot initially grows only one embryo. It takes a machine to turn the tiny (bean-shaped) embryos into a baby in 24 hours. The robot, now self-christened as Mother (voice of Rose Byrne), attempts to learn how to care for one child before repopulating the whole facility (“I’m governed by different parameters”, the droid admits earlier).

The Daughter happily grows up, excels in ballet, and receives top-class education from Mother. But the child can’t go outside since (the Mother says) the outside world is still toxic and uninhabitable (nuclear war?). The beautiful Daughter, on the verge of adulthood (Clara Ruggard), becomes very curious about the outside world as it’s the nature of her age.

When she discovers a mouse sneaking around the facility her suspicion about toxic levels escalates. She hopes to have the mouse as a pet, but the stern mom roasts the mouse in an incinerator, citing the possibility of infection. Mother also takes more precautions to ensure the Daughter’s safety, saddles her with tests and other chores. The only thing Daughter freely does without being under the watchful eyes of Mother is to see the archived episodes of “The Tonight Show with Johnny Carson” (discovering pleasures in the basic human interaction). 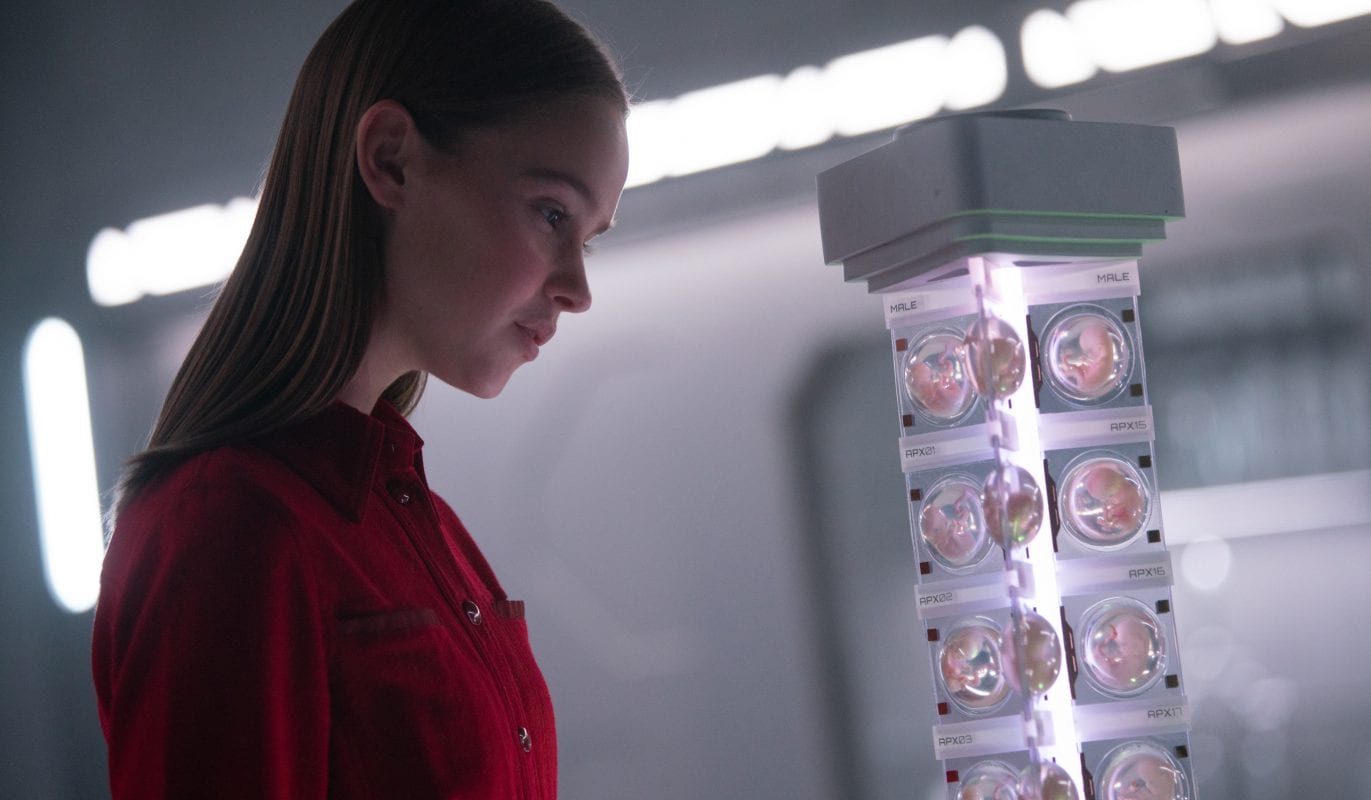 One day, when Mother was recharging itself, Daughter finds a woman (Hilary Swank), who’s been shot in the abdomen (we don’t catch her name too). Daughter now has a strong reason to suspect Mother’s theory of toxic air and the middle-aged woman babbles the droids have hurt her and other humans. And when the Woman sees Mother, she freaks out and tries to shoot. Mother, however, insists her only function is to care for and protect the human race. The trust issues between these human and A.I. maternal figures obviously intensifies the conflict within Daughter. And both of these motherly beings’ motives remain sketchier while the drama inside the bunker keeps dragging.

The best thing one can say about I Am Mother is that it’s not tedious. There are twists and fresh conflicts every twenty minutes or so in the narrative. The world-building part is meticulously done (especially the spaceship-like bunker) by Sputore, imparting slick-looking production values without the blessings of a big studio. Mother, brought into existence with a blend of CG and practical effects, perfectly maintains the atmosphere of paranoia and uncertainty. Rugaard is captivating as the curious and resilient daughter (Swank, the two-time Oscar winner, is equally compelling).

Nevertheless, Michael Lloyd Green’s script conjures too many twists (some predictable) that the eventual resolution doesn’t really make any sense. In an effort to reach for catharsis, the narrative wallows in confusion. It would have been more interesting if the tale focused on the family dynamics between Mother, Daughter, and Woman, all rendered with different psychological make-up.

Overall, I Am Mother (114 minutes) is a visually compelling sci-fi chamber piece with many exciting ideas, even though the makers don’t seem to have figured out how to develop it all.

I Am Mother Netflix Trailer

150+ Classic Korean Films are Streaming for Free on YouTube