In the Mood For Love [2000]: When Love was Merely a Possibility

“Sex never occurs during In the Mood for Love but I’ll be damned if this isn’t one of the sexiest films I have ever seen.”

Wong Kar-Wai’s ‘In the Mood for Love’ is often cited as one of the greatest films of this century in popular lists and in the lists of critically acclaimed films. It is indeed a masterpiece that has endured the test of time. I recently watched a series of Wong Kar-Wai films, right from his debut ‘As Tears go by’ and which was a bit underwhelming compared to his other better films, but it sure had the glimpse of WKW’s trademark lyrical storytelling. With his second film, ‘Days of Being Wild’ he delivered his first masterpiece.  “In the Mood for Love” is Wong Kar-Wai’s most poetic work till date.

Also Read: In the Mood for Love [2000]: Understanding over Confrontation

It is a film more about details, the little encounters and less about a proper storyline/narrative. Instead of focusing on the narrative structure, WKW emphasized on the intricate details; the fleeting glances and the occasional touches and a soundtrack that complemented those details perfectly. The glances are so well choreographed in slow motion that every little movement of their eyes and hands had a huge significance in how their relationship develops throughout the film.

Time and Place are crucial elements here, the cultural climate of the 1960s Hong Kong is visible more often than you notice. The film’s color portrays the beauty of Hong Kong and the way people dressed in that period. Time and Place are reason, these two socially impaired people couldn’t allow themselves to fall in love but rather stay only in the mood for love. Overly familiar neighbors, the society which is traditionally intrusive is presented very aptly and it is another presentation of their community. It is incredible to see that romance can be so powerful even when there is only a possibility of love. This near romance love tease is shown in the most graceful manner. 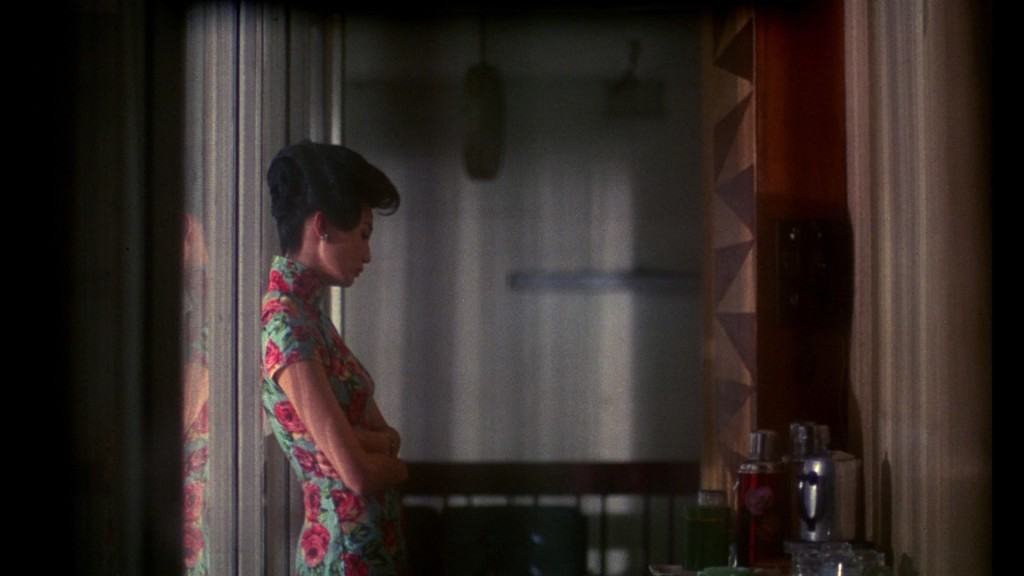 Tony Leung is effortlessly brilliant, so much that we understand why he is the finest actor from Hong Kong of his generation. Maggie Cheung looks incredibly classy and suave but still conservative, so much that even when she is dressed beautifully, it is never a revealing dress, it is one of many symbols Wong Kar-Wai used to represent the society in his movie. Throughout the film, there is a romantic waltz that plays in the background whenever the two of them cross each other’s path. This waltz is so infectiously beautiful that it constantly plays on the back of your mind for weeks once you have watched In the Mood for Love.

This film is exclusively about these two people, so much that even the cheating partners are never shown in the film. They have a few dialogues but we never see them, which is also symbolic of the fact that Wong Kar-Wai wanted to focus exclusively on the heroes and those who sin are not heroes. The film and the relationship between the lead pair take their time to grow but never really develop into a fully fledged relationship and that makes the film so much more subtle. The apartment they live in is so confined that it is almost symbolic that the universe is asking them to end up together but they can’t do that because it is a sin in that society and also because their spouses did the same which acts as a moral barrier between them.

In the Mood For Love [2000]: When Love was Merely a Possibility