Spiderhead (2022) Movie Ending Explained & Themes Analyzed: The world is getting crazier by the day. The Joker was right. It is changing around us and we don’t even know it. COVID was an eye-opener. It has alerted us to the threats that mankind faces from things that it can’t see. Biological warfare might just be the next big war. Who knows? The way these scientists at big pharmaceutical companies can alter the biology of matter and make it something else is scary. A big part of this scary element comes to a frightening reality in ‘Spiderhead’, the newest Netflix original everyone is streaming right now.

The thing I love most about ‘Spiderhead’ is that it is not the least bit pretentious about itself. It does not profess to be something it is not. We are promised enjoyable 90 minutes and a shirtless Chris Hemsworth. Although the latter doesn’t come through, the former is certainly in abundance. Due to the peculiar nature of its plot, it would be amiss to call ‘Spiderhead’ a straight-up thriller. Director Joseph Kosinski seems obsessed with the new trend where these kinds of films with serious elements also have a lot of goofiness, something like a Guy Pierce flick. While ‘Spearhead’ does not have the same charm in its humor,  it does a great job of getting good laughs going around. A couple of oddballs moments here and there really turn the screws.

‘Spiderhead’ is based on George Saunders’ short story, Escape from Spiderhead. Hemsworth plays Steven Abnesti, the supposed head of the “Spiderhead” program on a secluded island. This program is overseen and regulated by a Protocols Committee and is made up of former inmates with a violent history. It is not a penitentiary because of the ease of access to different places in the lush building by the participants. They can even enter Steve’s room without prior notice. Steve, along with Mark, experiments with various enhancing drugs that have distinct properties. While one can make you horny, another can make you violent. Miles Teller stars as Jeff, a participant in the program. He is closer to Steve than other patients due to his more likable and conducive traits.  When a mishap happens with one of the patients who kills herself, Jeff, who has some indirect part in it, is able to access the personal drawer of Steve’s desk where he discovers the shocking truth about the whole experiment and Steve himself. 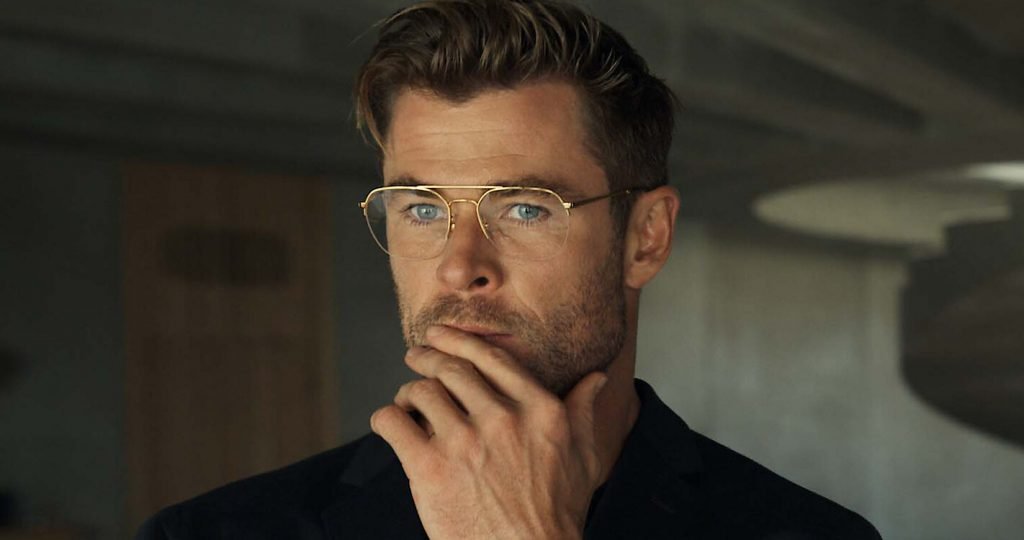 If one reads the actual short story, it is dark, melancholic, and at once indigestible. The writing style is harsh and there is no softness and warmth that you find in this dramatic adaptation. Saunders catches you at your most vulnerable just as you think we will have a happy ending. However small it may be, Lizzy and Jeff’s love does make things easier. It might have even seemed that the ending would be different than it was. But in such projects, creators often have the last say. ‘Spiderhead’ makes no exceptions when it comes to the scale of production. The insides of the building are lavishly set up, hardly giving it the appearance of an experiment facility. Maybe that is part of the larger deception that Absneti has sculpted. Everything points to a futuristic look that the designers have gone for. A peppy soundtrack can change fortunes for movies today and ‘Spiderhead’ greatly benefits from choice numbers that’ll get you moving.

Kosinski does not have the flexibility to give the narrative serious-minded depth. Besides Jeff’s flashbacks, there isn’t a lot that gives you too much to think and process. The redeeming part is that Kosinski is well aware of this fact. And mind you, Kosinski is no muck with creating compelling storylines that really engage you emotionally. Works like Only the Brave, Oblivion, and more recently Top Gun: Maverick prove his mettle. His changed attitude, though, is key in turning the tides towards the film. ‘Spiderhead’s is solid one-time popcorn entertainment that over-the-top platforms bank on to fill their banks and keep them going. This review does not end here. Read on to get all the details regarding typical plot points that you might have missed in your first viewing.

What is the facility about?

‘Spiderhead’ is a facility created with the connivance of State authorities to “experiment” upon the participants. The catch here is that these participants are all serving jail time and have “voluntarily” agreed to come here. Why? To increase the probability of getting a reduced jail time. Jeff, for instance, is in for killing his friend (and girlfriend, as it is revealed later) in a car accident. Lizzy is in there for inadvertently killing her nine-month-old baby, leaving her in her car in scorching summers. Steve Abnseti is the program head, as is suggested at the start, but in reality, he is the head of Absneti Pharmaceuticals, an MNC that will use these drugs for commercial use. One drug in particular that we will discover ahead. We see Steve mention several times to the participants that the Protocol Committee, which is overseeing that their safety, and ethical nature of science is being preserved, takes the final decisions. These include, inter alia, the go-ahead to administer the drugs to the participants. It s actually Steve who himself takes all those decisions. Like a madman, he plays the pretend game to keep them in the dark to advance his vested interests.

How are the drugs administered to the participants?

The colorful thing we see attached to the back of the participants is called the “MobiPak”. It is the device that is used to administer or drip the drugs into the blood of the participants. Mark is supposed to refill the Pak with vials of the different drugs each night. The mobile device that Steve uses gives the command to infuse the drug with the blood when they say “acknowledge”. There is a certain limit to each of them being injected that is safe. Beyond that limit, the drug can turn deadly, as it does with Heather. Also, although it is not implied, if the drugs are mixed, they also will prove to be chaotic for the participant to handle.

An Overview of the Drugs

Darkenfloxx, as the name suggests, is the troublemaker. It makes you angry and irritated and paranoid. Heather, actually, is a victim of an overdose of this drug. As we see subsequently, it is not pretty. There was another incident where Mark said to Jeff after his “tussle” with Sally that the MobiPak is not to be jostled with. It must remain in its position. While HEather deals with the infused drug, her Pak gets disturbed and hence, we see that reaction from her. It goes beyond those safety limits and she kills herself.

To help the participants give a more vivid description of the things happening in front of them for his notes, Steve directs Mark to often give this drug, called “verbulance”. It basically gives them the ability to unlock the part of their brain that handles the speech part.

This is the ultimate drug that can help the administrator control the person it is injected with. It extracts absolute and complete obedience from the person it is subjected to. If we look for figures in literature to help us, perhaps Orwell’s “Eyes” from 1984 will best describe the drug. It does not alter but destroys and creates a new template of behavior to be followed by the subjects.

How do Mark and Jeff Outsmart Steve?

Jeff indicates to Mark when he comes in to refill his Pak that he knows Steve is lying about the Protocol Committee. This is because he is able to open Steve’s secret diary when Heather stabs herself and Steve goes out of the room, dropping his key while he does so. He also discovers that the names for the drugs are created from a board of Bingo. Additionally, the ultimate aim for Steve is to experiment with the “B-6” drug, which he labels O-B-D-X in his diary. That is the jackpot drug. Jeff appeals to Mark’s good conscience – which we see through several scenes, he has. It is because of this that Mark agrees to help Jeff. He makes an excuse for illness and leaves the island. Before he does, he fills Steve’s Pak with the pills, including the B-6, and gives the control of administering them to Jeff. This way, Jeff is able to administer the drugs at will to Steve and neutralize him until Mark brings the police to the facility. We then see that Steve is actually able to resist its effect and fight back to set up the finale, but this is how Mark and Jeff outwit Steve to bring down his evil plan to control the world with B-6.

Why does Absneti ask the participants to say acknowledge before he gives them the drugs?

Just because! It does help to maintain the semblance of the participant-centric, ethical element of the experiment. But it has more to do with Absneti’s maniacal urge for his ultimate goal: complete obedience. This little pattern also ties in with the larger idea of the plot that it is the free will of people that gets them into a mess. A world where they are told to do exactly the “right” thing for them would be a much more orderly world. By taking the drug and doing what he tells them to do, the participants lose this element of their decision-making. It makes them unaware beings capable of being controlled. This small detail might seem insignificant, or just convenient on the face of it, but a little more digging reveals this big conspiracy.

Spiderhead Movie Ending Explained: Do Jeff and Lizzy make it out alive from the facility?

So, the ending is set up perfectly. After Mark spikes Steve’s Pak and gives the controls to Jeff, he uses the various drugs in a torturous way to remind him of the pain he makes the participants go through. Steve is able to overcome the effect and forces a 100% dosage of I-16 on Lizzy, who then tries to commit suicide, just like Heather did. Jeff and Steve brawl and the former is able to overcome him. He just about saves Lizzy’s life and calms her about the confession regarding her daughter. They then try to escape. Steve is just able to make it back and announces on the PA machine to the entire group of participants in the facility that Lizzy and Jeff escaping would be the worst outcome for them. Since they have been taking the B-6 drug, they listen to whatever he says and go after the couple.

They are able to escape owing to some luck and quick thinking. Steve suffers an overdose of the drugs as his Pak is broken in his tussle with Jeff. He is able to charter his plane and take the remaining vials with him. But, as he does, the impact of the drugs makes him lose his grip on reality and go straight into a mountain and crash the plane. The police also make their way to the facility as Jeff and Lizzy enjoy their freedom.