Home»Reviews»Films This Week»Lightyear [2022] Review: A Small Scale Film For A Big And Grandeur Space Ranger
Films This Week/Reviews

In a blink-and-bliss Star Wars-type introductory scene in “Lightyear,” we are informed that back in 1995 when young Andy got his toys, Space Ranger- Buzz Lightyear was a figurine from Andy’s favorite film. But mind you, this is not the origin story of the Buzz Lightyear toy from Pixar’s “Toy Story” series. And this, the film that we are about to watch, is that film. It makes for a curious case of reverse engineering in Pixar’s filmography that now relies on prequels and spinoffs to juice in extra money based on its famous IP.

Given the studio’s penchant for sequels and prequels of its famous figures, it’s only surprising that it took the studio so long to get down to it. In the first act, upon encountering hostile elements on a planet, Buzz (Chris Evans) and his commanding officer, Alisha (Uzo Aduba), scramble back to the safety of their ship and manage to set up a safe space for the people on the ship. Buzz keeps trying to come up with a super fuel that will take them back to earth. But every time he takes off, the four minutes he spends in space become four years back on the planet, and before he knows it, 64 years have passed (familiar plot?).

The turnip-shaped ship he’s flying crashes, marooning everyone on a hostile planet filled with killer vines and bugs. Alisha is now old and ailing, and the community’s new boss has no time for Buzz’s buzzing about in deep space. What will our never-say-die space ranger do now? Guilt-ridden, Buzz makes it his mission to discover an energy source that will help them achieve hyperspace and get off the planet. 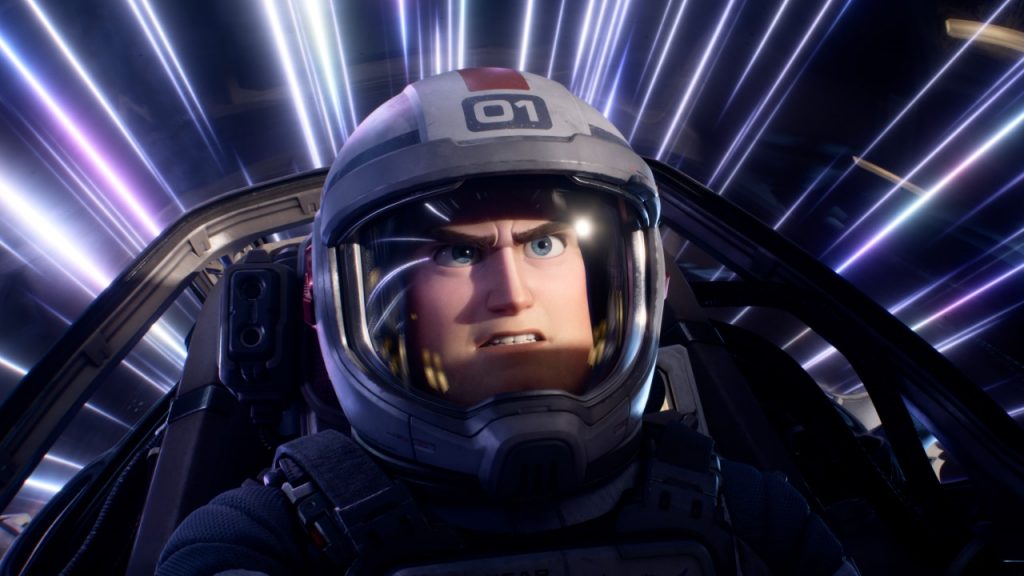 Helmed by “Finding Dory” co-director Angus MacLane and written along with Jason Headley and Matthew Aldrich, the makers here surely add a meta-touch to the universe without ever looking down upon the audience. With those opening credits, the film implies that the toy came from a contemporary reference for the kid- the most probable scenario for a kid growing up watching space-opera movies. But that’s also the most significant setback for the film. The screenplay doesn’t make the most use of the world’s full potential by further exploring the human condition of the beloved (toy?) character. In that regard, the 100-minute movie feels small for a big character. For instance, we never really get anything close to the fabulous running joke about the “inner voice” that appeared in “Toy Story 4”- a sequel that, even though it might’ve felt unnecessary, was shaped with a well-layered emotional texture. That is what’s missing here, nor do we get the thrills and poignancy of those four predecessors.

A giant robotic figure who calls himself Zurg (James Brolin) and his scary army hovering on a planet look straight out of a Star Wars movie. And the snatch-and-grab maneuvers in space give off a very “Gravity” and Nolan’s “Interstellar” feel. But those various aspects- that on paper surely seem compelling- never really mesh into anything that’s emotionally engaging. Especially from what standard Pixar has set for itself. A cat called Sox, voiced by Peter Sohn can be considered the best character in “Lightyear.” He saves the gang from doom and gloom while also making room for merchandising opportunities. Tim Allen had previously voiced Lightyear in all the Toy Story films. By having a different actor voice our protagonist (Chris Evans), the film makes an interesting and clever distinction because it’s not the toy version of the Buzz we’re seeing.

Scored by Michael Giacchino, “Lightyear” does have the right amount of nostalgic cues you would want to expect from a spinoff, but the direction never really makes full use of it. One could almost say that the film played it too safe and, as a result- took a far too heavy detour around space by focusing on other characters more than Buzz himself. The LGBTQ character of Alisha is very organically placed into the screenplay and even forms the (somewhat) emotional core of the movie.

“Lightyear” marks the first Pixar film in more than two years to debut exclusively in theaters. But it’s easily among the weakest of all studio’s recent films and would’ve suited better for a straight-to Disney Plus feature. Through its comedic gags and limited set-ups and pay-offs, it will keep the viewers entertained throughout but never engage them with something grandeur. And that’s a disappointment, considering what’s come before. Since this isn’t the Buzz we know from the Toy Story films, the Space Ranger must first prove his mettle as a protagonist. I’m just not really sure if the 6-year-old me would’ve wanted a Buzz Lightyear toy after having seen this film.