Dual (2022) Movie Ending Explained & Themes Analysed: In Riley Stearns’ films, emotion is a commodity used sparingly. Deadpan humor is the constant emotional tone utilized throughout the film while exploring human interactions and their nuances in all their awkward alacrity. In Dual, Stearns takes an essentially pulpy sci-fi premise and explores inward, both the emotional core of the protagonist as well as the emotional presence of the world around her, interacting due to her presence and the presence of the clone, and how the world decides to accept the existence of only one of them. It’s a heady idea, garnished with the exact right amount of ridiculousness and short emotional outbursts.

Stearns chooses to begin the film with a cold open, whereby we see a man (Theo James) standing at the end of a football field. We can make out spectators in the stands, but unlike in normal games, there isn’t any audible reaction. A terse silence envelops the field while we see a camera broadcasting the event. A woman standing at a corner of the field waves a flag whereby two things occur. A woman standing behind the man removes the sheet covering the table behind him, and we are treated to the sight of weapons like a crossbow, an axe, a pair of garden clippers, and a knife.

The referee at the other corner of the field waves a green flag, the floodlights switch on, and the velvet cloth acting as the screen covering the other side of the field falls. We, as the viewer, see another man standing on the other side, and without missing a beat, the other man fires an arrow that barely misses the first man. Scrambling for cover, the man overturns the table and uses it as a shield, barely avoiding the arrows embedded in the table surface. Moving his hand beyond the barrier to check his opponent, the man manages to get hit with an arrow on the shoulder.

Riddled with agony, he uses the clippers to cut the arrow shaft off, takes the knife, and starts running towards his opponent, like a quarterback running for a touchdown. Dodging the arrow, the man jumps on his opponent, overpowers him, and stabs him multiple times. As the man gets up, looking down at his slain opponent, we learn that the opponent is none other than that man’s doppelganger. To be precise, the slain opponent is the original, while the man we had been following so far had been the clone. We hear the result of the duel declared by the referee – the clone is now the sole version of Robert Michaels. 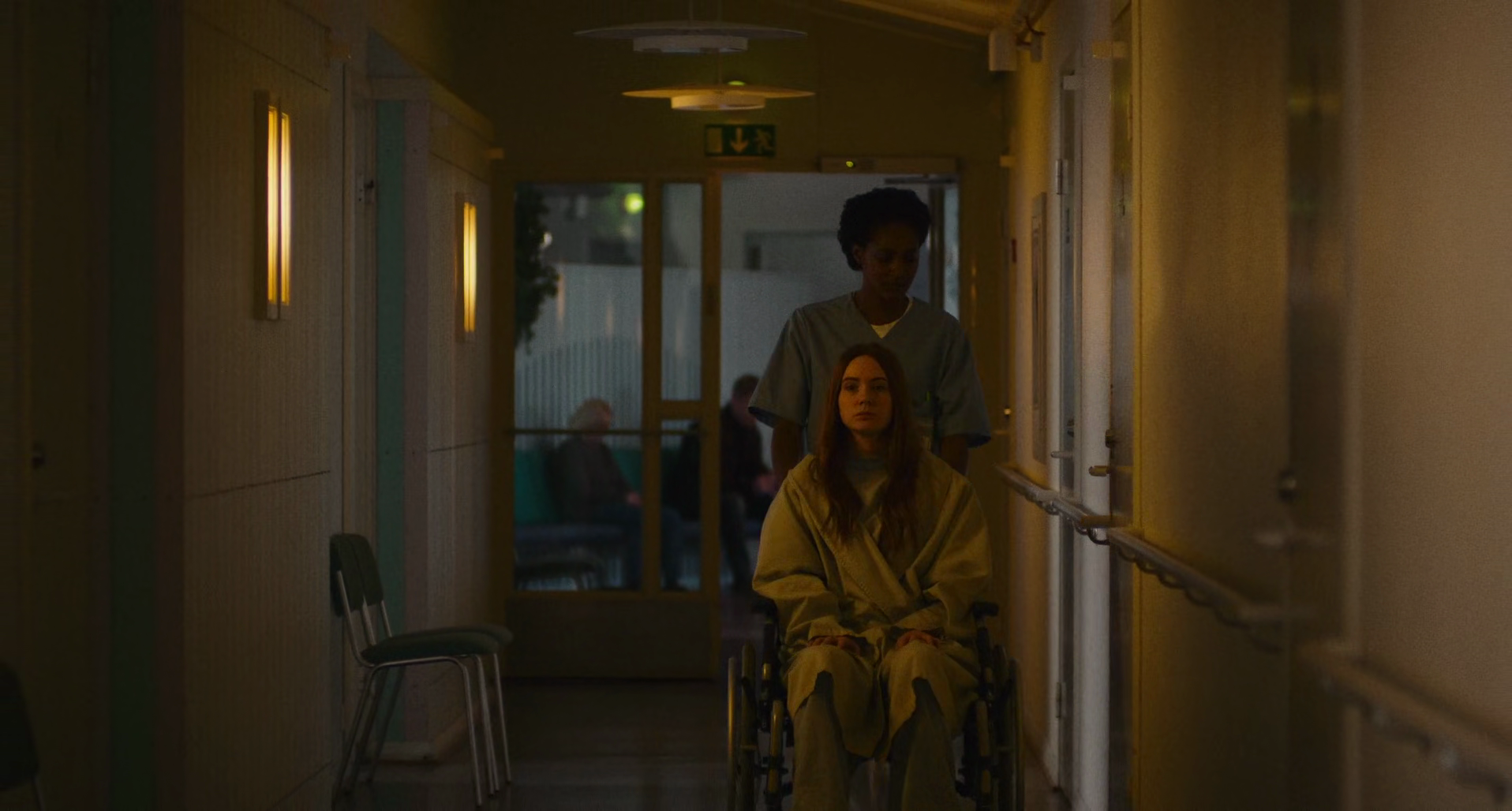 This is the near future, and we are introduced to Karen Gillan’s Sarah, a depressed alcoholic stuck in a fading long-distance relationship with her boyfriend Peter, content with eating junk food and watching porn to supplement her pleasures. She is also disconnected from her overbearing mother, who she sees in a dream, and as she is trying to avoid answering her probing questions, she starts gagging and then starts vomiting copper coins and blood. Sarah wakes up from that dream to find her pillow and bed drenched in blood. Not revealing any conflicting emotions on her face, she leaves the sheet to be washed in her laundry and drives up to the hospital, where she learns that she is afflicted with a terminal disease and has a 2% chance of survival.

As such, she opts to have a cloning procedure on herself so that her loved ones will be spared her loss. The process described is very much a cross between realistic DNA mixing and “straining the boundaries of fantasy” sci-fi, whereby her spit is the only ingredient necessary to create a perfect clone of her (at least physically). The clone would then learn from the original either via conversation or via associative osmosis and thus become the perfect replacement. Sarah gives the clone “Sarah’s Double” the basic knowledge of her family and her lifestyle, her wants, and her needs.

Months later, we see the clone in a relationship with Peter, and Peter is far happier than he had ever been with Sarah. Sarah, meanwhile, is stuck in a waiting game of the disease finally taking her and is informed that she is in permanent remission. She is then advised by her doctor to decommission her clone as the reason for the existence of the lone is essentially null and void. However, when she returns home, Sarah sees her mother talking with Peter and the clone. Sarah had avoided speaking with her mother and informing her of her impending death, but she gets a rude awakening when she learns that the clone had been in contact with her mother for months, unbeknownst to her.

Sarah is informed by her lawyer that her double has requested a petition to stay alive. The law, in this depiction of the future, states that no duplicates of the same individual would occupy the same space, and thus a publicized “battle to the death” would occur. Sarah has a year to prepare for the duel which would decide both of their fates.

Sarah takes up combat classes and training with Trent (Aaron Paul), a character who feels completely at home in a Riley Stearns film, very much a part of The Art of Self Defense as well as belonging in the world of “Dual”.

Throughout the next year, Sarah improves on her physical and mental prowess, while learning the different ways of maiming and killing her opponent in the clone duels. As recompense, she teaches Trent hip-hop dancing. She also manages to meet with Peter, where she informs him that she doesn’t blame him for his receding feelings towards her but also that she wouldn’t hesitate to kill her clone. 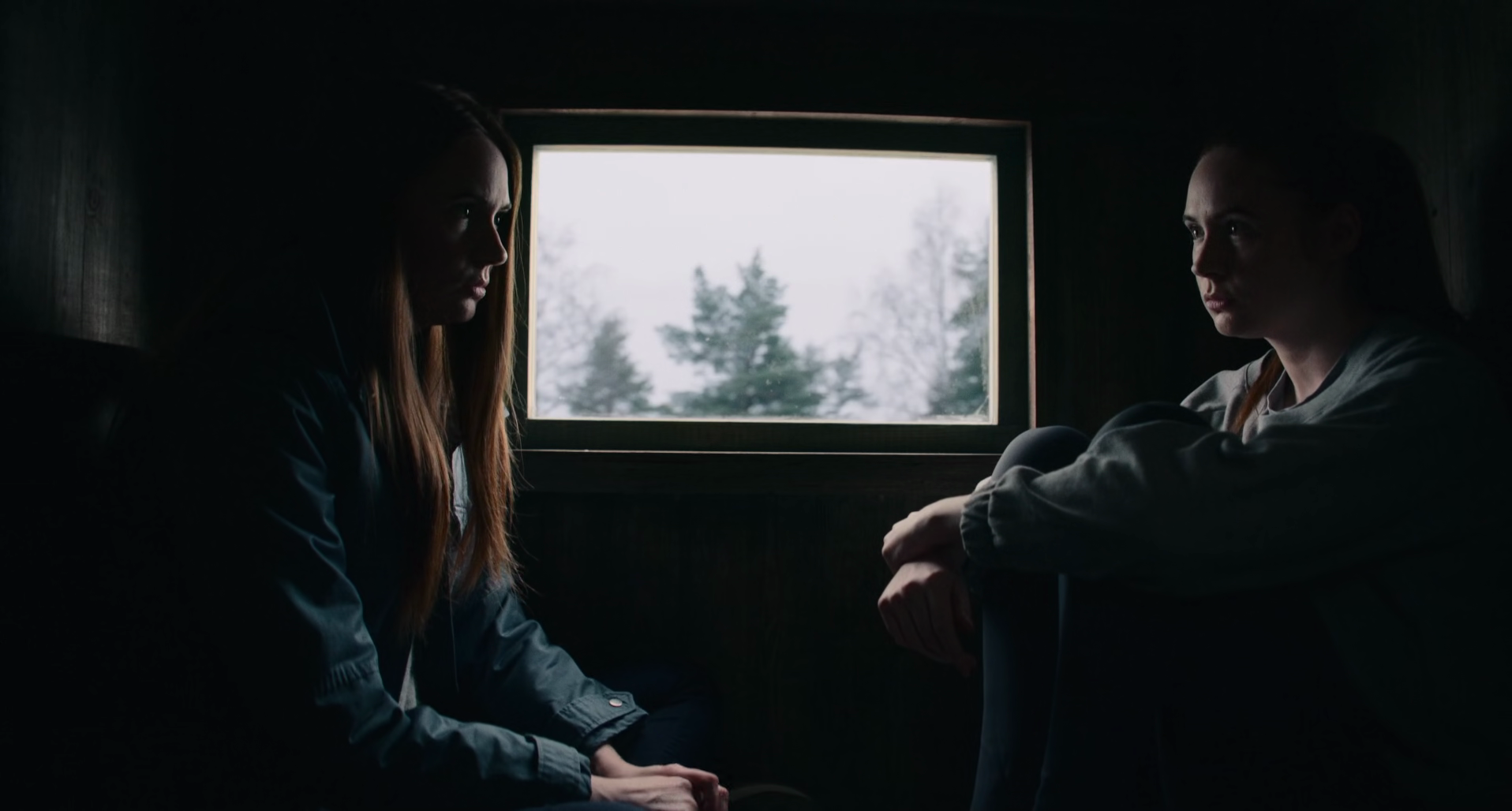 One day, as she finds herself unable to kill Trent’s dog as per Trent’s orders, to check for her killer instinct, she spots her clone keeping watch on her. Without hesitating, she fires an arrow through her window pane, breaking the glass and killing a chihuahua but missing her target. Chasing the clone down to a playground, Sarah finally sits down with her double where they both talk about the life they both know and how the double finally understands why Sarah was depressed. The clone then takes Sarah to a support group, where survivors of clone duels confess to their feelings of impostor syndrome and guilt. As per the rules of the group, the survivors would write a letter to their slain counterparts describing their feelings at the moment.

Sarah’s double eloquently pens a letter down where she takes all the blame over herself and also argues the existence of an arbitrary system that doesn’t allow the both of them to exist together. As a result, both of them plan to escape the border and live a life free of their constraints. The next morning, having driven to the outskirts of the town, both Sarah and her clone start hiking through a forest. In the middle of the hike, Sarah realizes that her clone had duped her and, in her trusting nature, she had drunk the water from her double’s bottle, which had been poisoned.

The scene then shifts to the playground where the duel was supposed to take place. We see “Sarah” limping through the playground and walking towards the referee, informing her that her “clone” had fled, which automatically forfeits the duel. A “thorough investigation”, which mostly accounts for asking her family whether they believe “Sarah” is truly the original, is conducted whereby the family answers in the affirmative because they already favoured the clone more than the original. Thus, she is free to take over her life completely.

However, the double soon finds herself feeling depressed as the life she shares with Peter and her mother batters her down like it did the original. As a result, while driving her wrecked car through the road, unable to drive through the proper lanes because she never really learned to drive, she stops her car and breaks down, wracked with guilt and cognizant of her shortcomings as the movie ends.

Dual is very much following the template of Black Mirror, in showcasing a world where the progress of technology and sci-fi is utilized for uses beyond the traditional norms of human progression. Here, the prospect of cloning, while sounding like a promising idea on paper, feels and is shown as a far more convoluted method of dodging confrontation with the basic feelings of loss.

Instead of accepting and trying to move on from the loss of an individual, this future would rather accept a cloned version of the same individual. And Stearns subtly showcases that it is not as rosy as the advertisements intend to portray, as even the founder of the company who had pioneered the technology had been a clone for 12 years. However, as we see the advertisement ending, we see him leaning in for a kiss with his wife, and his wife subtly pushes him away.

As a counterpoint, we see the original Sarah being thrown to the wayside for a newer and perhaps much more unvarnished model, which is an acceptable outcome for her family, but we see the double devolving into the same phase of depression and unfulfillment that had afflicted the original Sarah. It shows that the clone neatly fitted into the slot of the individual to be molded into the perfect version of Sarah according to her mother and her boyfriend. 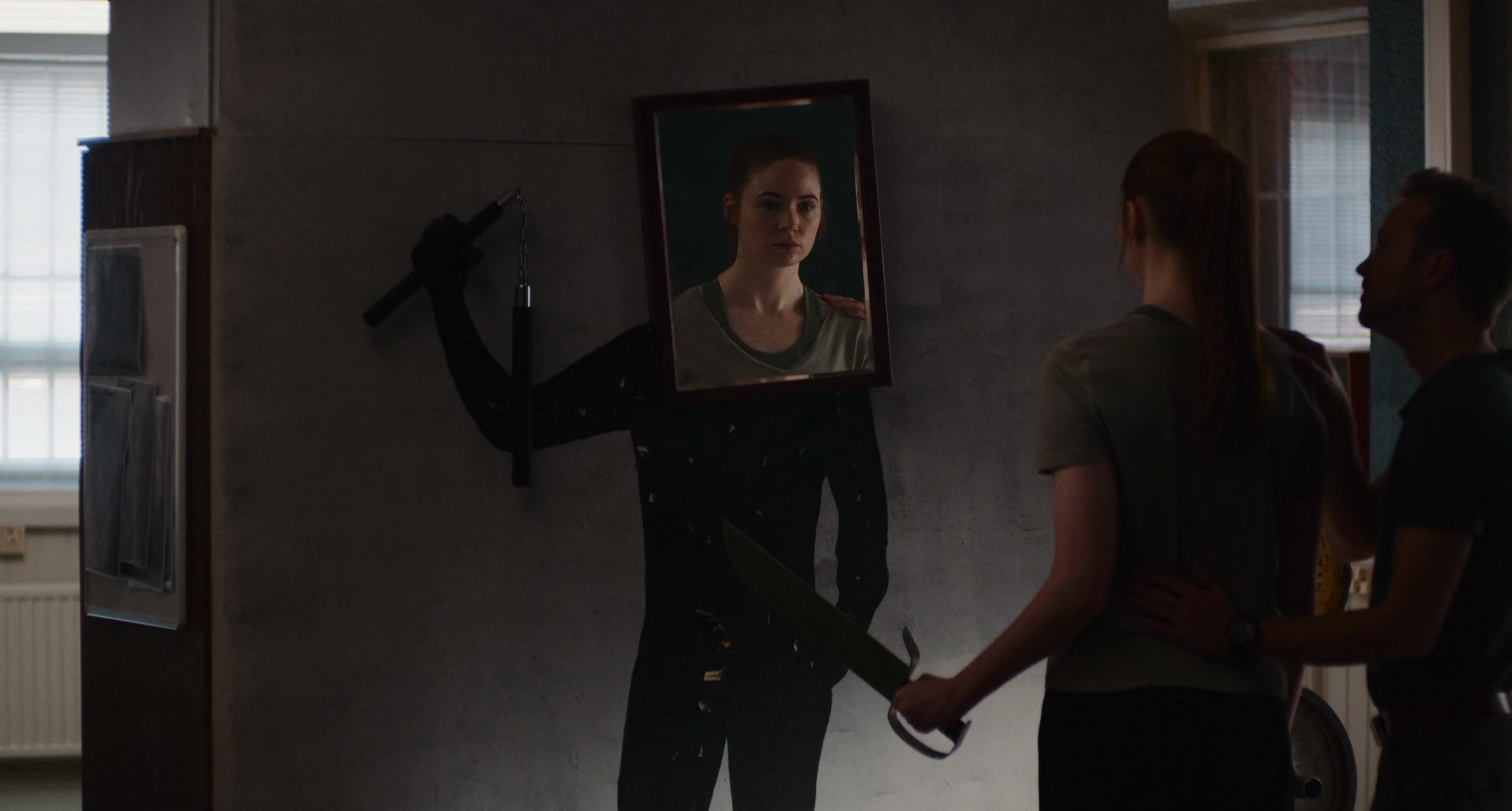 It is a sobering thought, that Sarah’s inability to confront her depression and her fading relationship with her family contributed to the creation of the clone. The presence of the clone compounds her depression. One might argue that Sarah had been the happiest when she had been training for over a year or when she had resumed her hip-hop dance classes because they reminded her of the older version of herself. But before she could acknowledge that realization and continue this thread of thought, she was poisoned by her clone, who wanted to regain her singular identity.

From a technical standpoint, Riley Stearns’ film uses a muted color palette and a cooler color tone. It complements the mostly emotionless tonality of the dialogues uttered by every individual. As a result, the wavelength of the film feels like a straight line. However, the comedy is elicited not from the dialogues, but from the circumstances and the realizations, which are just realistic enough for the viewer to wince and be cognizant of their reality’s burgeoning flaws.

However, the third act of Dual feels like a deliberate subversion of the duel, which had been telegraphed from the cold open itself. Unlike a well-made subversive turn, which would elicit a feeling of awe and appreciation from the audience due to the inevitable turn of the narrative, Dual’s subversion in the third act falls with a thud because the plan of Sarah’s double starts feeling needlessly convoluted, a feature mostly absent throughout Stearns’ narrative, which takes a pulpy premise and streamlines it to become a bleakly comedic morality play.

Karen Gillan doesn’t have much to offer distinctive to both versions of Sarah because of Stearns’ emotionally flat framework, but she manages to produce comedic gold with the perfect delivery of Stearns’ deadpan humor. She is the perfect delivery mechanism for Stearns’ story to be carried to its muted conclusion and yet be given an emotional poignancy because of her performance in those emotional outbursts.