Home»OTT»Book of Love (2022) Review: A Guilty Pleasure With a Glossy Surface and a Hollow Base
OTT/Prime Video/Reviews

Book of Love (2022) Review: It is gospel truth that we cannot let the Month of Love go by without the mention of a romantic comedy (better known as rom-com) Rom Coms are a sparse breed these days and good rom coms? Well, we have to take our chances with them. Gone are the days when we would swoon over Richard Gere and Julia Roberts in ‘Pretty Woman’, or miss a beat at the charming smile of Hugh Grant. Now, we just have to make do with what is available. Sometimes, luck strikes and we are blessed with ‘Miss Congeniality’ or ‘The Holiday’. But other times we have to marinate in the piquancy of the classics and wish ourselves better times.

Directed and co-written by Analeine Cal y Mayor, Book of Love is a romantic comedy that started out strong with a fresh and promising premise, but the intervention of too many negative factors led to its downfall too much too soon. It may be the lack of good writing or just the cliched stereotypes that became the film’s undoing. There is an uptight British who hasn’t been in love, a feisty (almost) single mother who is dying to prove herself, a crafty ex-husband, an empathetic son, and a gay publisher. When you find these characters come together in a film, you have already predicted the story yourself and you know how that one goes.

Book of Love (2022) is a story about a failed English novel-writer Henry Copper (played by Sam Claflin) whose latest work ‘The Sensible Heart’ tanked so terribly that it sold only three copies in London, one bought by the writer himself. While he is snubbed by his publicist constantly, both of them are surprised to hear that the same novel turned out to be a buzzy bestseller in Mexico. Astonished but pleased, the writer agrees to go on a three-city book tour in Mexico where he meets Maria Rodrigues (Verónica Echegui)- his translator who translated the book from English to Spanish. To Henry’s surprise, he finds women swooning over him once he lands in Mexico. 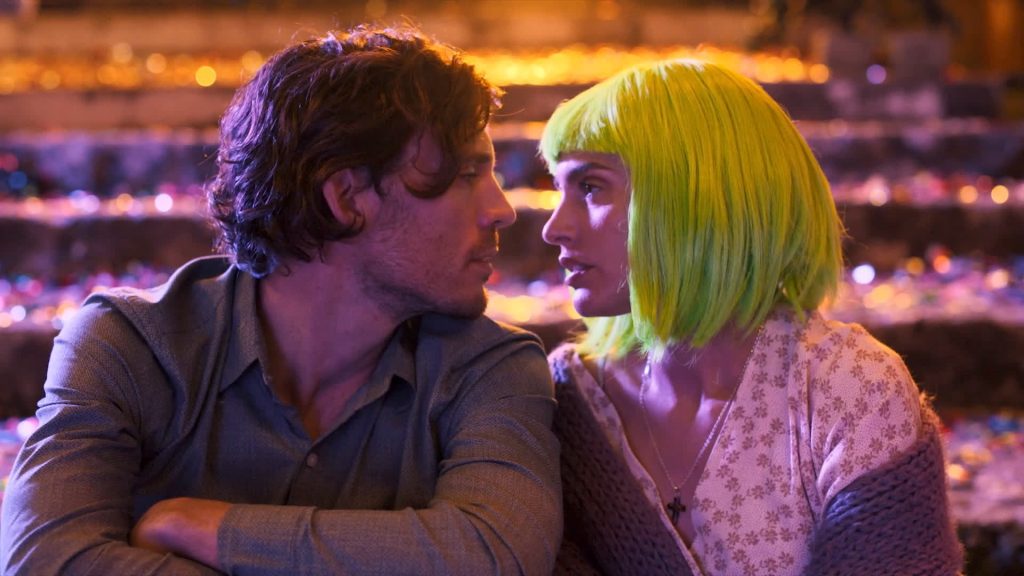 Pretty soon he finds out why, and at the very first book reading. His dull and uneventful book had not just been translated, it has been completely re-written into a raunchy and sensual sex novel that has charged libidos worldwide. That obviously infuriates Henry who believes in a more ‘patient’ love than a ‘passionate’ love. At this point, we are just one-third into the film. There is an evident language barrier that leads to translated confusion which eventually evokes funny laughs from the audience. In my opinion, had the director/writer, could have held onto that for a while longer, it would have reduced the impact of the drab and predictable narrative that followed.

Anyway, we are all aware that Book of Love is a rom-com, and so the characters have to fall in love at some point. But as a viewer, you do not want that to happen as there is no visible chemistry between the protagonists despite the individual sex appeal that they radiate. Both Claflin and Echegui fit their individual characters like a glove- they are charming and interesting to watch on screen. But once they come together, no sparks fly, no violins are heard and no butterflies are felt in the gut. And that is the bare minimum that you expect out of a romantic comedy. Remember the longing that Joe had for Meg in ‘You’ve Got Mail’, remember how we pined for them to unite and how we rejoiced when they finally met? That longing, that connectivity is amiss by a huge margin in Book of Love.

The film is not without a little merit though. It has been strung together with small themes of feminism and sheds light on one of the most impertinent issues that we have been dealing with since times immemorial- the success or the acceptance for a female writer! Ever since the 19th century, women have been writing under pseudonyms or male pen names. Mary Ann Evans (of Mill and the Floss) is better known as George Eliot, other examples being the famous Bronte sisters who switched to male pen names. The film barely touched base with this theme but did not care to explore it. It would have been incredibly brilliant had the filmmakers done so.

Besides that, it has small, very stereotypical depictions of feminism- how men should be allowed to be scared and how they should be able to express it, how women can change tires to portray them as strong, and so on. However, the final nail to the coffin comes when you get the most dreaded proclamation of love in the climax. A huge rom-com cliche, and frustratingly so, it has the declaration of I Love Yous in front of a packed live audience. And that is also the moment you realize you have successfully wasted time on a guilty pleasure film that you had already watched countless times before.

Rocket Boys (Season 1) 'SonyLIV' Review: A show about physicist that glides, if not Soars