In the provinces of Japan, a pale pink flower - Cherry Blossom, blooms for mere two weeks and then withers and dies as autumn passes. Sofia Coppola mirrors the ephemeral nature of this fateful bloom to a relationship of two adrift souls - Lost in Translation is a sweet panacea to the aches of loneliness and melancholia.

In the provinces of Japan, a pale pink flower – Cherry Blossom, blooms for mere two weeks and then withers and dies as autumn passes. With an almost dream-like appeal, it is a majestic jolt of life, one which unfortunately is extremely short-lived. In Lost in Translation, Sofia Coppola mirrors the ephemeral nature of this fateful bloom to a relationship of two adrift souls finding a happenstance connection in an alien surrounding.

Bob Harris (Bill Murray), a washed-up actor in the twilight of his life is so uncomfortable with himself that even his suits are fitted with clips to drape his body. Whereas Charlotte (Scarlett Johansson) is a recently married deeply unhappy woman whose all endeavors of endearment with her husband have been lost in translation. When they meet over a Vodka tonic and Suntory whiskey in a dusky lit bar atop Tokyo, all Bob could ask Charlotte was if she would be interested in a prison break. Oh, Sweet Lord, Coppola literally conjures symbolism in a whisker! She plays around with her screenplay meticulously, weaving an atmosphere of soft blue isolation which amplify silences. She often subverts expectations and usual tropes of the genre and presents a worldly take on the need of being loved. 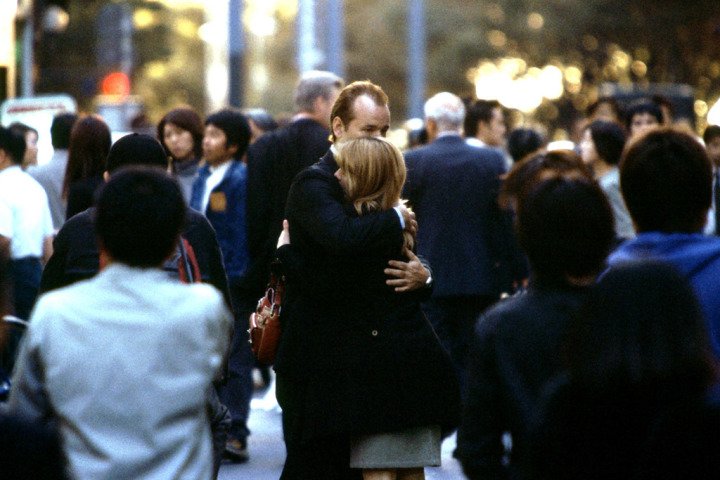 Bill Murray oozes an effortless charm and deep-seated yearning for affection. With a smile that speaks multitudes and the ever laid-back swagger, Murray skillfully steps into the character with much elegance. It is extremely hard to deduce the line where he stops being himself and starts to act. On the other hand, Scarlett amazes with her dreamy eyes and husky voice, a face carrying every ounce of the misery of being trapped alone in a void of a failing relationship.

A bustling foreign city, two lost souls, and a doomed platonic romance – Lost in Translation is a sweet panacea to the aches of loneliness and melancholia. Even if one is not sold on the concept, when all will be said and done, nothing can replace Murray crooning Roxy Music’s ‘More Than This’, acoustically, while hiding immense longings beneath an achingly sweet smile. Arigato, Murray. Arigato, Coppola.