10 Best Scarlett Johansson Movie Performances: As the career of American actor, singer and activist Scarlett Johansson enters its fourth decade of existence, and in the wake of her first two Oscar nominations, now seems as good a time as any to examine the full cinematic spectrum of Hollywood’s favourite leading lady.

After a successful career as a child actor (including a cameo in the infamous Home Alone 3) Scarlett came into her own in the early 2000s starring in arthouse drama and comedy films, and working with celebrated auteurs such as Woody Allen, Brian De Palma, Sofia Coppola and, later, Spike Jonze and Noah Baumbach.

Her ascent has been punctuated by moments of true blockbuster stardom, it seems only fitting that in the year she received two Oscar nominations she also starred as Black Widow in the latest Avengers movie. Now 36, engaged, and with a new solo Black Widow franchise on the way, Johansson’s career is still going from strength to strength, but for now here are her ten career highlights, cherry-picked and ranked for your viewing pleasure! 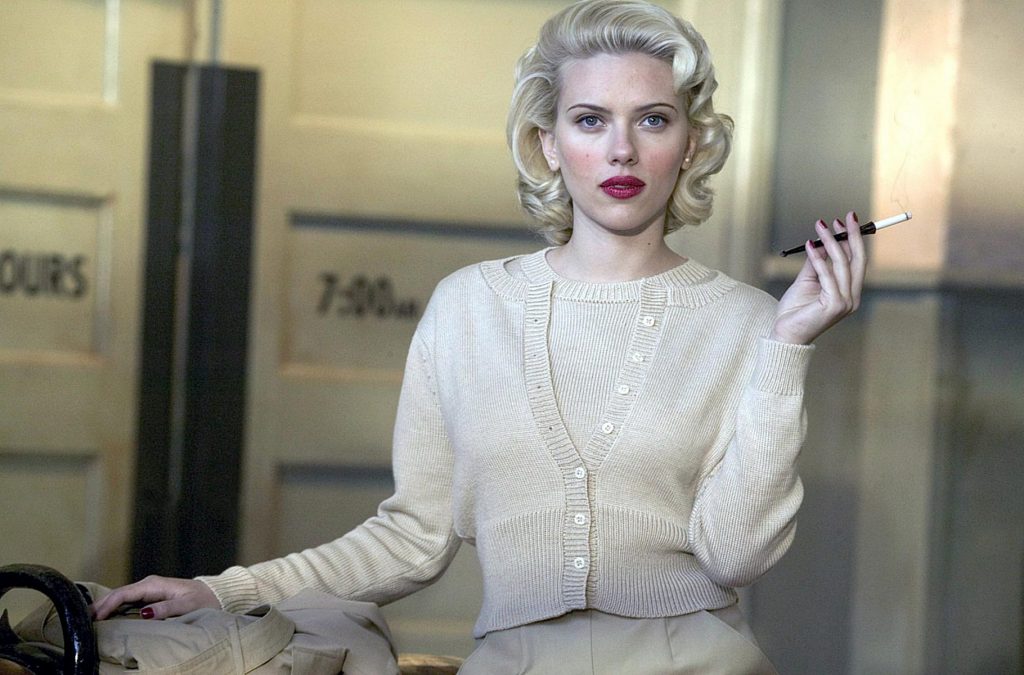 Sometimes in cinema there can be a good, even great performance, concealed within an otherwise shoddy final product and the first entry on this list is certainly a prevalent example of such an outlier. Though you’d struggle to find many die-hard fans of Brian De Palma’s ambitious true-crime neo-noir The Black Dahlia, there’s no denying Johansson’s charm in the role of Kay Lake.

Using her old-school sense of Hollywood glamour to her advantage, you get the sense that Scarlett is the only actor on De Palma’s wavelength, knowingly playing within the stereotypes of the classic femme fatale trope whilst adding a high dose of camp in the process, subverting and modernising the role in a manner she had also done the year before in the far superior Match Point. By all means a fun performance, if you’re willing to sit through this prolonged failure of a film to witness it. Here is #10 in the list of Best Scarlett Johansson Movie Performances. 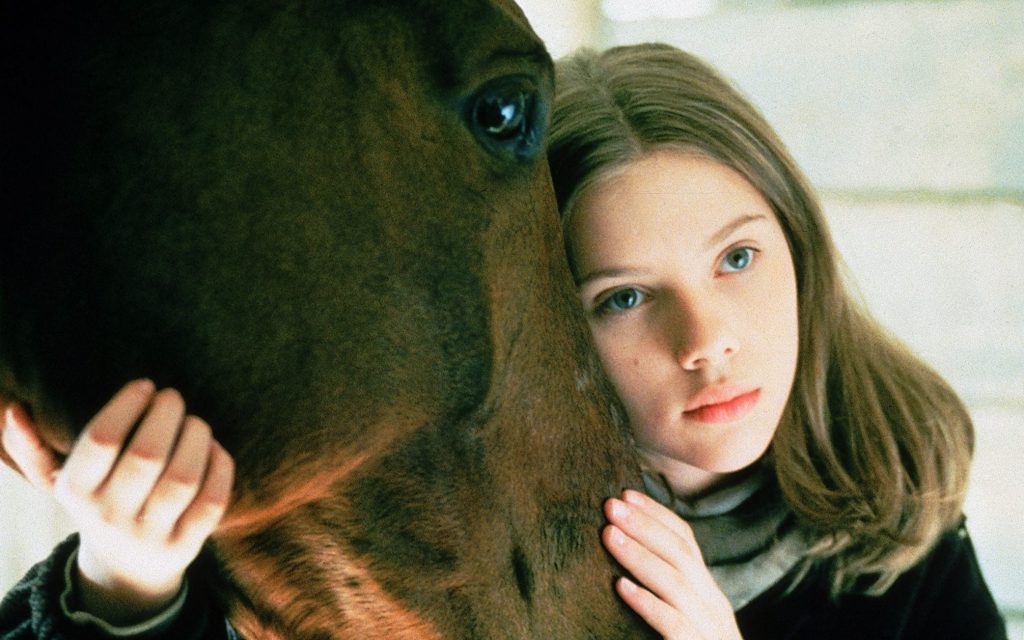 Much like the aforementioned Black Dahlia, Robert Redford’s 1998 hit drama The Horse Whisperer is far from a perfect film, but is truly elevated yet again by Johansson’s potent performance as Grace MacLean, a young girls whose life is forever changed by a life-threatening injury sustained whilst riding a horse.

Similar List: 10 Alternate Dog Movies That You Should Watch

To say the actress was only 13 when shooting commenced on the film, Scarlett does a lot of heavy lifting, and manages to outshine Hollywood icons Robert Redford and Dianne Wiest in the process, as well as a host of other stars in the ensemble cast. Utilising both her precocious wit and wisdom to create an engaging screen presence, as well as effectively portraying the trauma of her ailments, and, of course, a classical sense of whimsical wonder at the titular horse whisperer’s abilities. A challenging role in a decidedly unchallenging film. Here is #9 in the list of Best Scarlett Johansson Movie Performances. 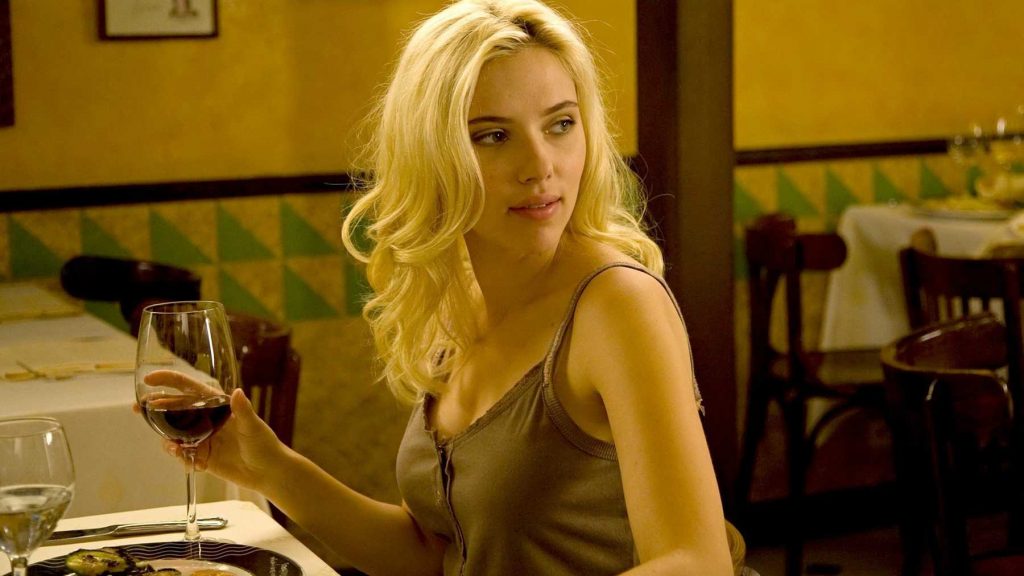 Johansson’s third and final collaboration with Woody Allen (following Match Point and the underwhelming Scoop, 2006) sees her play a tourist in the titular Catalan city, who manages to insert herself into a love triangle with a famous painter (Javier Bardem) and his wife (Penelope Cruz in Oscar-winning form). The film’s another late-career highlight for its director, and is once again propelled forward by terrific performances, and thought it was Cruz who won all the awards in hindsight Scarlett shines brightest, playing her role of Cristina with a perfect balance of naivety and agency.

Also by Woody Allen: Annie Hall (1977): A Wisdom Tooth For All Ages

Three-way relationships aren’t an easy thing to pull off convincingly and truthfully on the silver screen, however thanks to the performance of Johansson as the love-hungry, smitten newcomer Vicky Cristina Barcelona does just that, as she plays perfectly within the ensemble and in her own right in an another stellar turn. 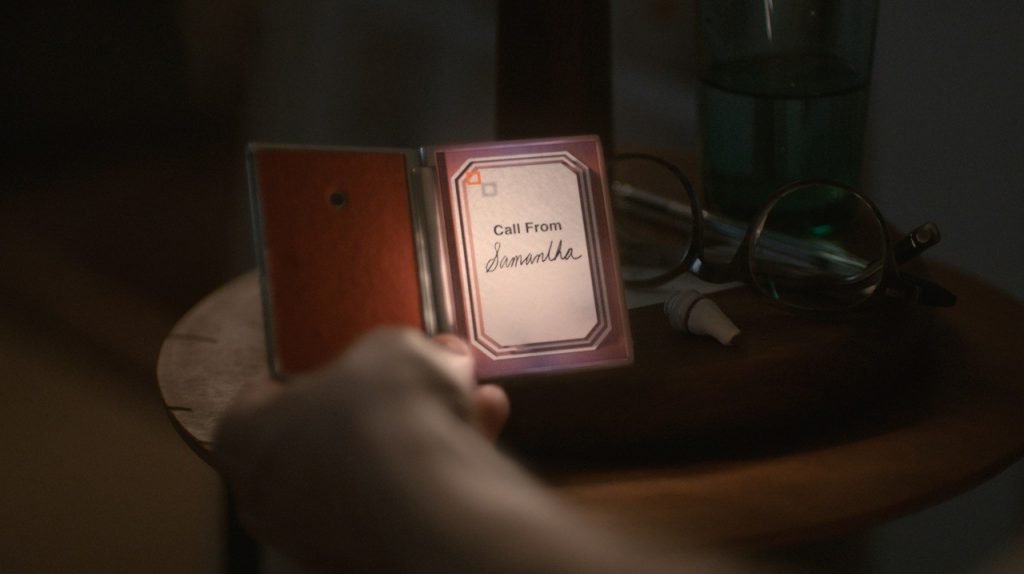 If this were a ranking purely based off of the quality of the film itself, then Spike Jonze’s Oscar-winning hypermodern sci-fi romance of a man falling in love with his operating system would be much higher. However, this is primarily a ranking of performance and the range of Johansson’s acting abilities are somewhat hindered by her purely sonic contributions here. That being said, she does an excellent job as the sweet, sultry voice of robot Samantha.

Related: The Feminine Side of Theodore in Her

It’s remarkable to think that her vocals were an afterthought (brought in during post-production after Samantha Morton’s resignation) as it’s impossible to imagine the film without her, with Scarlett delicately and creatively playing upon her beauty to create a memorable and loveable character; without her the high-concept premise of the movie might now have stuck the landing. One of her most difficult and potent roles – even if you can’t see her in it. 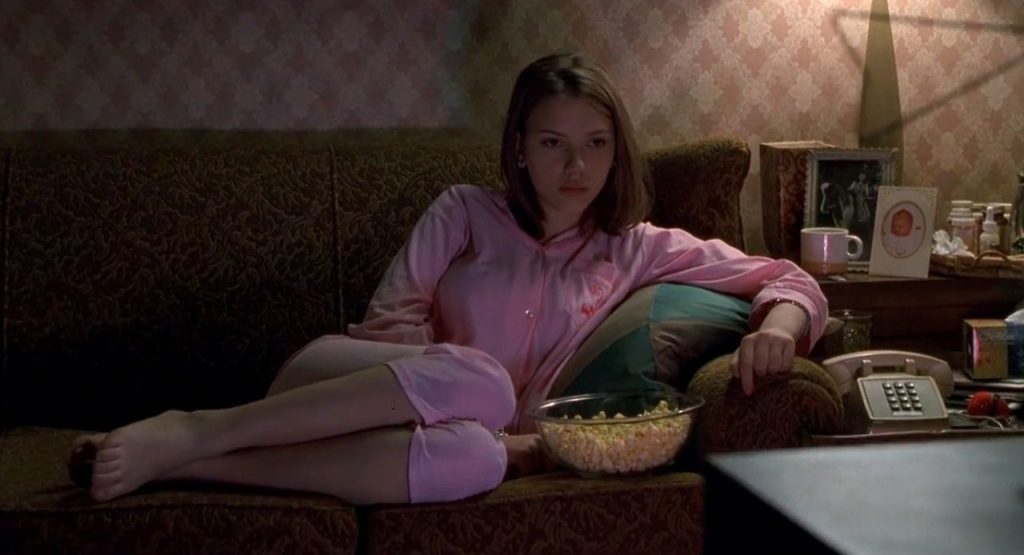 In Johansson’s first truly great role, and the one that would establish her as an indie auteur favourite for much of the 21st century, she plays the relentlessly snarky high school graduate Rebecca in Terry Zwigoff’s cult classic dark comedy Ghost World. Though she possesses much of the same attitude and wit as her counterpart Enid (played by Thora Bird) the performance does a fine job of portraying the more progressive and forward-thinking aspects of Rebecca that set the two friends apart, and ultimately culminates in such a compelling little character study.

Speaking in perpetually dulcet tones, her sarcastic one-liners and relentless cynicism are, for better or worse, the voice of a generation at once ignored and ignorant in return, something captured brilliantly by Zwigoff’s script and Johansson’s pivotal performance. 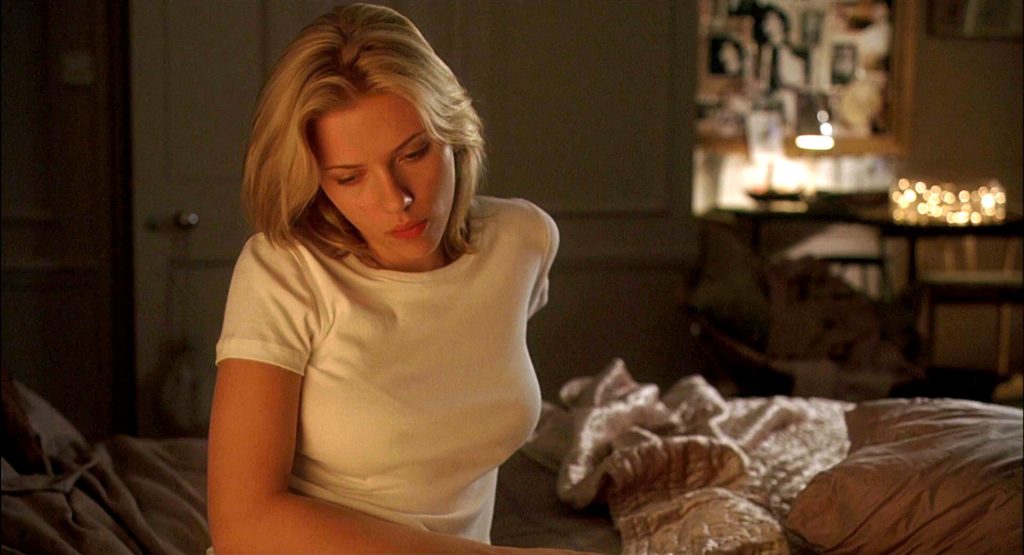 The 2000s were an extremely patchy period for writer-director Woody Allen but he briefly returned to form in 2005 with Match Point, a gripping psychological thriller buoyed in no small part by one of Scarlett’s most memorable performances. Utilising her skills to create a more developed and interesting brand of femme fatale (also seen in The Black Dahlia), in its finest moments Scarlett’s portrayal of Chloe is one that transcends the occasional histrionics of Allen’s script, her guile as an actress seeing through the facade of tropes and cliches of the murder-mystery genre to deliver a fresh new interpretation on a character that in other hands could have become a sloppy caricature.

Hardly an understated role, but an effective one nonetheless as she shows herself as the vital cog of the Match Point machine, providing the irreplaceable star power needed to turn this tale of chance, fate and morality into an Oscar-nominated gem. Here is #5 in the list of Best Scarlett Johansson Movie Performances. 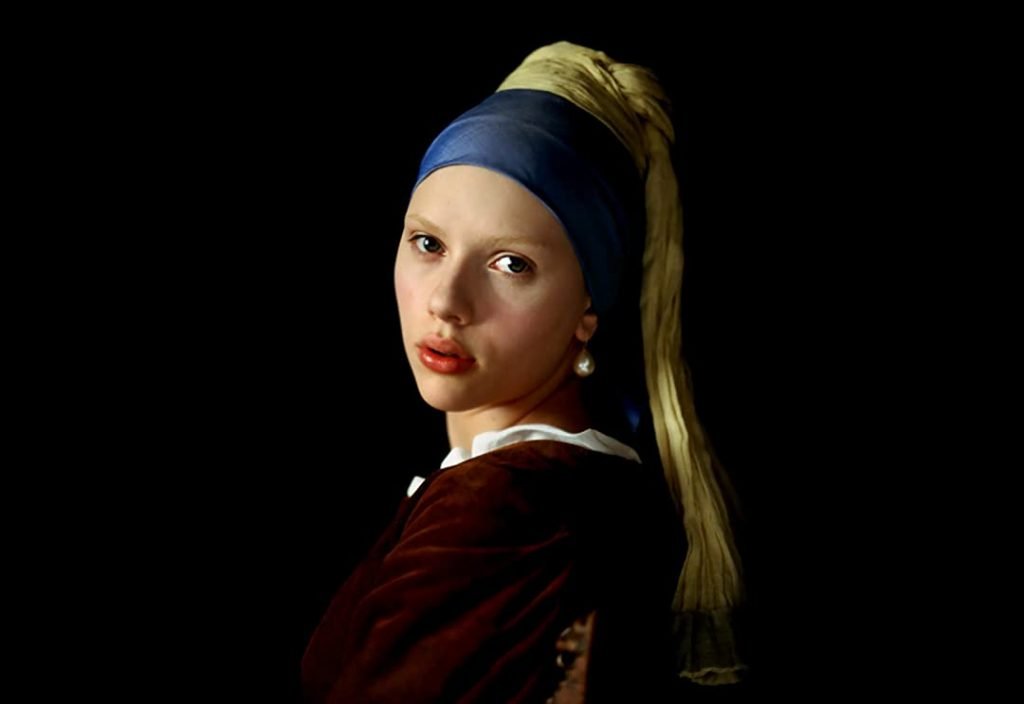 Performing of a cinematic portrayal of one of the art world’s most iconic and beloved figures isn’t easy, but in The Girl with a Pearl Earring, Peter Webber’s acclaimed biopic detailing the story behind Vermeer’s titular painting, Scarlett Johansson does just that. What could have simply been an overly idealised and simplified portrayal of the great artist’s maiden and muse transforms into a performance of startling confidence, vulnerability and duality through her ample skill as an actor.

One one hand, we have the stern yet obedient servant of the Vermeer household, partaking in a burgeoning romance with a local butcher (played my Cillian Murphy) and adapting to her new lifestyle. On the other hand, however, we see her character Griet as the enchanting and ethereal muse of Vermeer (Colin Firth), both inspiring and contributing to one of the most famous paintings ever put to canvas. And thanks to Johansson, both roles are navigated elegantly and gracefully, but with a succinct level of bite too, containing a trademark sense of wit. A performance worthy of its real life subject. Here is #4 in the list of Best Scarlett Johansson Movie Performances. 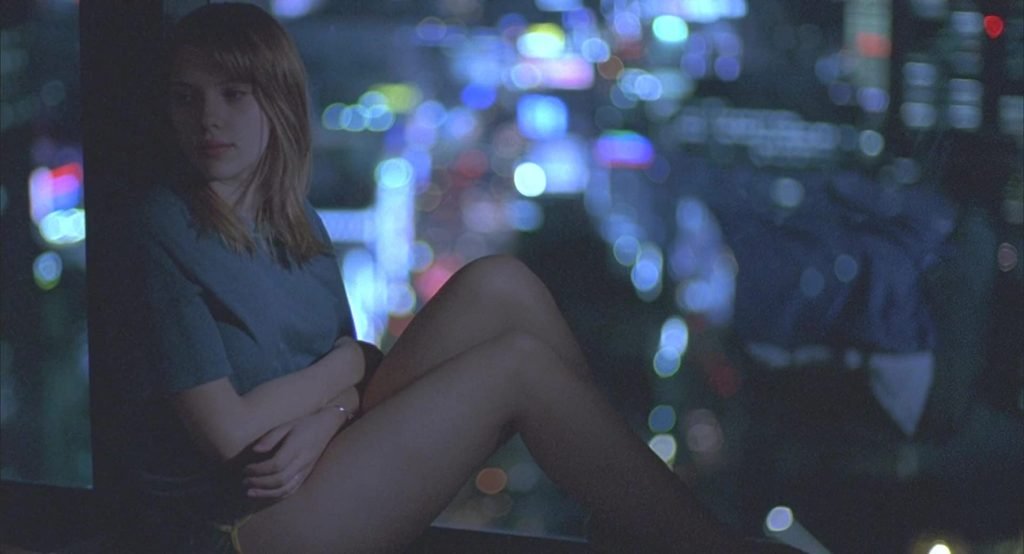 Scarlett Johansson and Billy Murray are an odd cinematic pairing, especially in romantic terms, but for a few wistful days in Japan, their chemistry is palpable, a true cinematic portrayal of human connection in the fleeting modern world. None of this would be possible, of course, without the enigmatic yet tender intrigue that Johansson brings to the table via her character Charlotte, a college graduate who strikes a bond with Murray’s aging movie star in Tokyo in Sofia Coppola’s Lost in Translation.

Recommended Video: An Analogy Between Her and Lost In Translation

Adapting her acting style brilliantly to Coppola’s brand of lyrical loneliness, the performance captures the sense of being caught in something bigger than you can comprehend, in this case the examination of the human condition and the connection between human beings, all set in the metropolitan haze of modern Tokyo. Johansson won a BAFTA for Best Leading Actress for her work on the film, and for good reason. 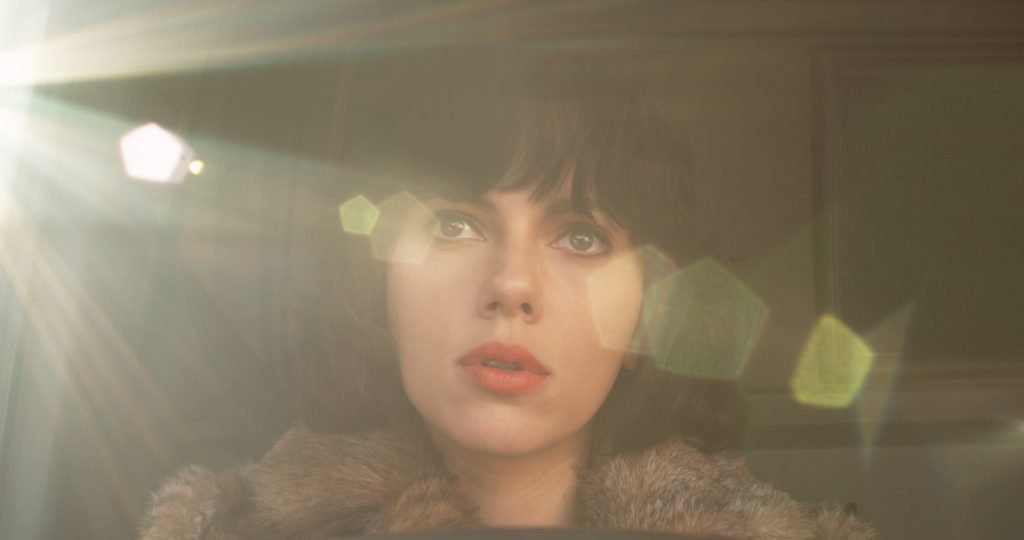 Ditching Hollywood for inner-city Scotland, Johansson’s most challenging role to date sees her cast a dead-eyed, predatory alien seductress in Jonathan Glazer’s sci-fi inflected horror film Under the Skin. Emboldened by Mica Levi’s haunting industrial score and visually striking cinematography from Daniel Landin, Johansson’s beauty has never been so haunting, as she soullessly scours Edinburgh in hunt of her prey. What strikes one most about the performance is the almost contradictory realness of it.

Though in theory Scarlett simply plays a nameless alien who kills men by submerging them in black goo, in practice Glazer utilized hidden cameras and non-actors to enhance the everyday earthiness of the story. The tonal effect of such an unorthodox filming process is truly staggering, and helps us see that behind the black wig, British accent and is one of the most touching and potent performances of its lead actresses’ career — a mostly mute portrayal of a distinctly feminine search for identity. 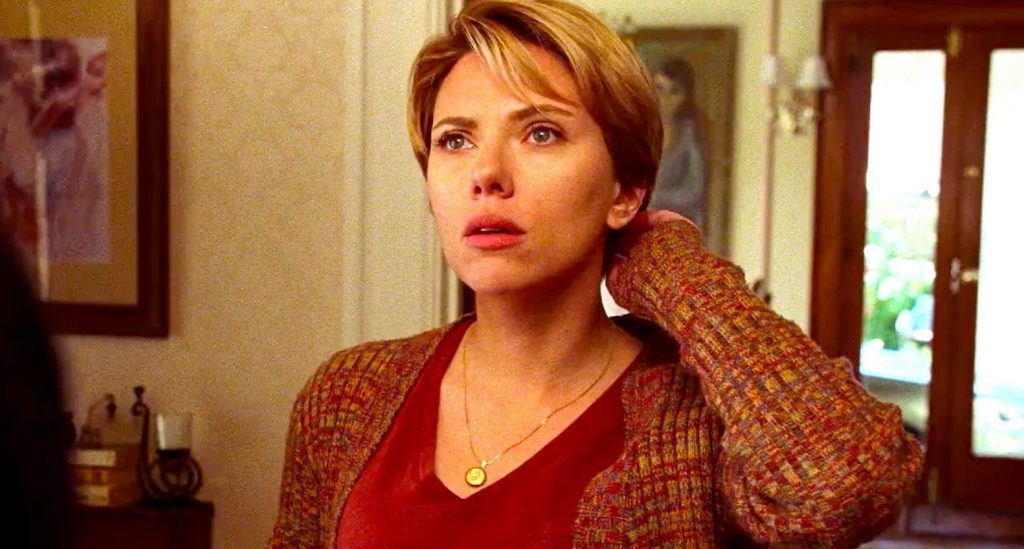 In many ways, the leading performance in Noah Baumbach’s critically garlanded drama Marriage Story sees Johansson playing against type. De-glamourised with hair cut boyishly short, she plays actor Nicole in the process of divorcing theatre director Charlie (Adam Driver). As they go to and fro in the midsts of marital grief, Baumbach’s camera places the two performers front and centre; the direct, unmissable emphasis of every frame is acting. The result? Without doubt the greatest performance of Johansson’s career.

Though perhaps more praise was given to Driver’s admittedly excellent performance opposite her, for my money it’s Scarlett who steals the show, overruling some weak character writing from Baumbach to deliver a touching performance, equally universal and intimate, and a true testament to her talents. How she didn’t win an Oscar for her work on Marriage Story is truly bewildering, as her work was miles ahead of any other actress that year, or any other Scarlett Johansson performance for that matter.

Film lover and fan of all things Anderson, Altman, Yang, Ferrara, Obayashi, Lynch, Akerman and Godard. Active on Letterboxd, and not much else to be honest.