Spike Jonze’s Her is one of the most powerful sci-fi films I have ever seen. Its commentary on techno-social isolation and loneliness is deeply cutting, and not at all far from how attached the world has become to their smartphones. And what makes this film truly remarkable is not just how smart it is, but how deep.

Jonze’s protagonist Theodore Twombly (played by the brilliant Joaquin Phoenix) is interesting even beyond his relationship with his computer. He is not just a vehicle to carry a theme forward; he is a commentary on the awkward, socially isolated man, and what happens to him and his masculinity in a world so technologically advanced that you barely need to be around people.

Theodore is going through a divorce, and has retreated into a deep shell. He goes to work, punches in and out, does not go out with friends much, and spends his nights playing video games, and occasionally late-night anonymous phone sex. He is not really living, he is just surviving in the modern world and trying to cope with the pain on his own. If he has any outlet to vent at all, it is his job.

He works at beautifulhandwrittenletters.com, where people pay writers to dictate letters. Theodore takes primarily lovers and he pours his heart into these letters for other people, writing the most moving, heartwrenching, soul-bearing messages I have ever seen, fiction or non. He is, in every sense, entirely lonely, without the skills or drive to overcome it. 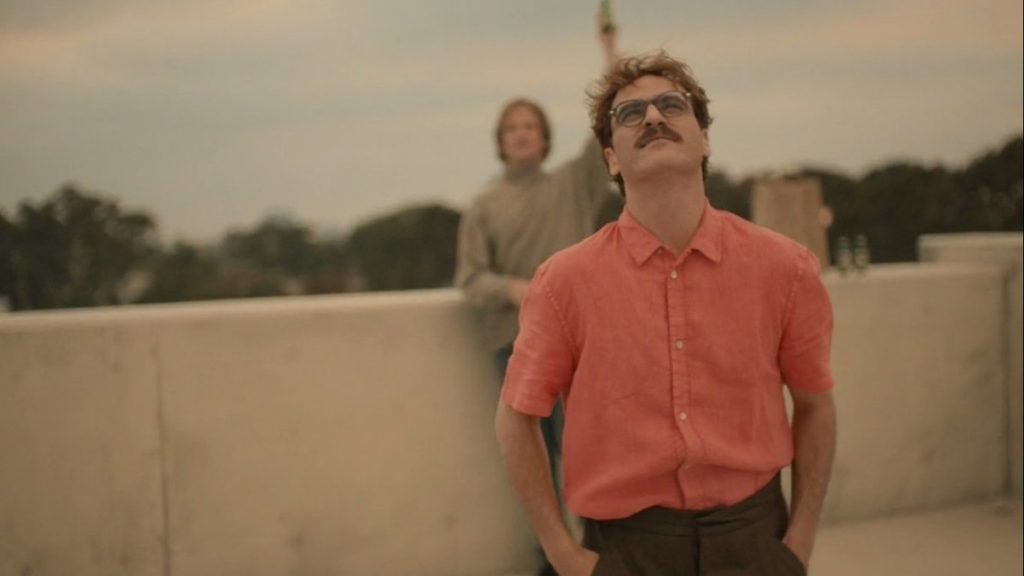 Theodore is not strong, and insecure about himself, let alone aware of that in others. He lost the one real successful relationship he had because of that. In many ways he relied on his wife as an emotional anchor without being that for her. When they met to finalize the divorce and he told her about his relationship with the OS “Samantha” (voiced by Scarlett Johansson) she balked at how insistent he was that she was really complex and interesting, and told him that he “always wanted to have a wife without the challenges of dealing with anything real”.

He blew a setup date because he couldn’t give a solid answer to whether he really wanted to date her or just use her as a one-night stand. He has very romantic ideas and knows how to write very pretty words but does not have that much emotional intelligence.

Some of Theodore’s personality might come from this. He has a few feminine traits, or at least femmy tropes. He wears either pink or powder blue shirts most of the time, and his cubicle is pink. He is very emotional, and it does not take much to set him off. He likes to cry sometimes. He listens to melancholy songs a lot, bathing himself in the emotion. His letters are not just for lovers, but every one we see is from a woman. Even his coworker Paul, who loves his writing, remarks on how feminine he is, telling him he’s part man and part woman as a compliment.

But why is he so feminine? Is this just who he is, or is it the result of something else in him? Or something that is not in him? He is a brilliant, beautiful writer, but does not know how to endear that kind of love in the real world, let alone show it himself. He cannot really commit, or handle problems that come up in a real, adult relationship.

Every single relationship he has, from his ex-wife to the date to even Samantha herself, fell apart because he could not handle shit when it got too real. He overthought and freaked out every time a problem came up, with no idea how to even come up with a solution for it. He is immature, oversensitive and weak, and his femmy traits are so loud because he does not have a backbone to handle his own sensitivity.

I think this is the real message of Her. It is a deep, endearing but brutally honest look at what happens to a normal man who never learns how to mature into a man. Femininity and sensitivity are not bad things in men, but they are if he does not know how to temper it with a healthy strength from inside.

Spike Jonze’s Her can be streamed on Netflix and Hotstar