The humanitarian crisis in Syria has been recently dealt in documentaries like Last Men in Aleppo (2017) and The White Helmets (2016). Waad al-Kateab and Edward Watts’ For Sama (2019) approaches the same subject from a very unique and powerful perspective. Delivered as a moving visual love letter to her infant daughter Sama, film-maker and citizen journalist Waad al-Kateab looks at the relentlessly brutal Syrian conflict and delicately documents everyday human experiences in a besieged war-zone. Waad has recorded more than 500 hours of footage between years 2012 and 2016 from Aleppo, the ground zero in a civil war between rebel militias and dictator Bashar al-Assad’s regime.

The news reports despite its somber tone might have made us see the dead in Syrian conflict as just numbers. But Waad’s devastating images will stay with us for quite some time, her display of trauma, grief, and gory death presents us the irreparable damages of war. Nevertheless, the 500 hour footage that’s brilliantly edited into a 97 minute documentary isn’t devoid of hope or laughs. A woman’s delight at seeing a persimmon, the camaraderie between freedom-seeking students, or the mother’s unconditional love for her baby daughter keeps us reminding how this is not just a story of death and destruction, but also of love, courage, and perseverance. 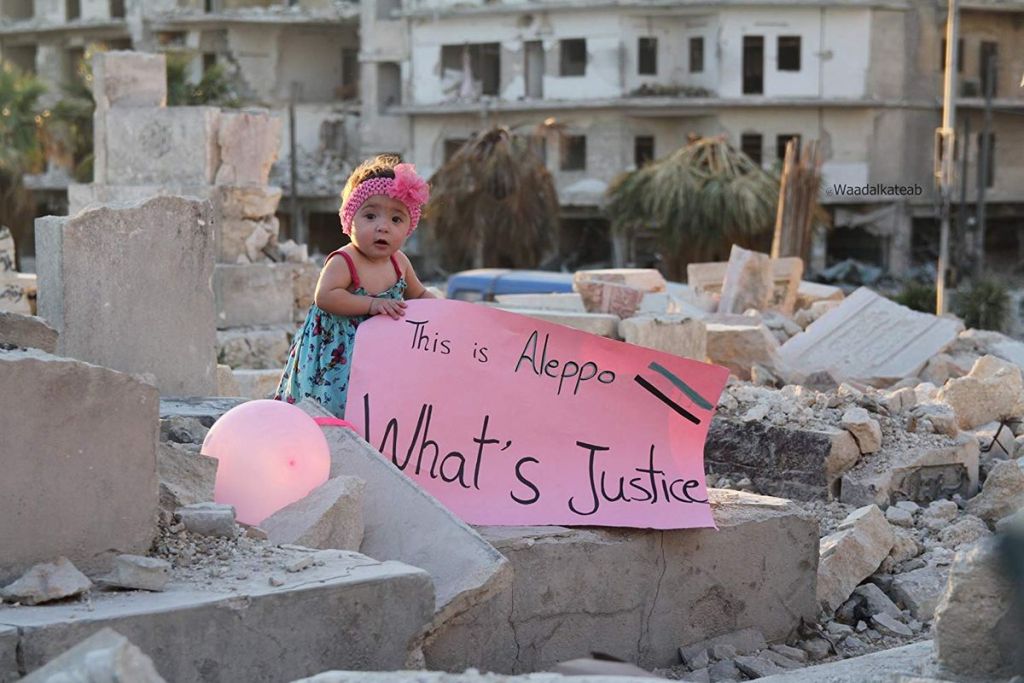 Waad al-Kateab and her family left Aleppo by the end of 2016 to London. There she worked with Channel 4 editor and documentarian Edward Watts (shares the directorial credit) to configure a narrative structure that would movingly exhibit the life behind the war-zone. For Sama first premiered at SXSW festival this year. It was later screened at Cannes and won the best documentary prize. Waad considers the documentary the ‘only weapon she can wield against the regime’ and continues to rise awareness on the cruelties inflicted upon Syrian civilians.

Similar to ‘For Sama’: The Edge of Democracy [2019]– A Captivating Account of Breakdown of Democracy

Waad moved to Aleppo around 2011, at the age of 18, to study marketing at the city’s university. It was the year peaceful protests against the Assad regime swept the country. The revolt soon turned into a large-scale civil war with Putin later lending war planes to Bashar al-Assad, which often dropped cluster bombs and chlorine gas on civilians and hospitals. The years-long stalemate between the government and revolutionaries only worsened by 2016 as the rebels supply lines into Aleppo was closed down by Russian airstrikes and Bashar’s ground forces. The months’ long siege escalated the fears of Aleppo residents (controlled by revolutionaries) as the military onslaught reached unprecedented levels.

Instead of showcasing Waad’s personal, visual diary in the chronological order, the narrative opens at 2016 and often flashes back to the years when the situation was less deadly. It’s in those times Waad fell in love with Hamza al-Kateab, a doctor and activist, who ran the city’s last hospital throughout the chaotic period saving the lives of thousands of innocent Syrians. Hamza and Waad got married and on the 1st day of January 2016 their daughter Sama was born. In a voice-over, Waad often addresses her daughter, explaining about her choice to stay in Aleppo and continue their battle for freedom. The horrific deaths (mostly of little children) she captures in her camera at her husband’s hospital halls, however, makes Waad to endlessly worry about her baby girl. At one point, she records the corpse of a boy and says, “I envy this boy’s mother. At least she died before she had to bury her child.”

For Sama, however, isn’t just about fear and love of a mother living in a war-zone. The revolutionary and journalist side of Waad is plainly evident in the way she unflinchingly aims her camera at the real horrors and traumatic incidents. Two dismayed little boys weep over the death of their younger brother; a grieving mother takes her child’s dead body, wailing, “Don’t take him from me. I won’t forgive you if you do!” Waad frequently speaks to the kids, the most vulnerable ones caught in this senseless conflict. These kids from the bombed-out inner-city neighborhoods play inside a burnt-out bus and withhold knowledge of what cluster bombs can do. Amidst the grim surroundings, kids laugh and paint the skeletal wreckage of the bus. Their pure smiles gets at you and the uncertainty of what awaits these innocent children deeply disturbs us. Perhaps, the most tear-inducing moment in the documentary for me was, when a doctor tirelessly attempts to bring a stillborn baby (born through caesarean, the mother rescued from the rubble) to life.

Also, Read: Of Fathers and Sons [2018] — An Unshakeable Portrait of Inherited Islamist Fervour

There’s a hopeful closure to these events portrayed as Waad, Hamza, and Sama eventually escaped (or forced into exile) after the surrender of Aleppo. But brutalities are still unfolding in Aleppo; children and women are being  displaced, starved, and murdered. On the red carpet at the Cannes Film Festival, Waad, Watts, and Hamza carried a sign that read, “Stop Bombing Hospitals”. Between 2011 and 2019, it is said that 500 plus documented attacks have occurred solely targeting the medical facilities in Syria, the majority of them carried out by Syrian government and its allies. The deliberate systemic destruction of health facilities and the massacre of doctors, nurses are done with an intent to increase the death toll (many injured have died without any medical treatment). While For Sama will be remembered for its message of love and resilience in the face of horror, it also brings home such depraved realities of modern warfare tactics.

Overall, through one woman’s indelible experience within a war-zone For Sama (97 minutes) depicts the power of human will and love that can’t be crushed by all these advance weaponry of the despots.