Home»Reviews»Films This Week»Dear Comrade [2019] Review: A High-Octane Crowd-Pleaser with Enough Passion and Heart
Films This Week/Reviews

In the earlier scenes, Deverakonda’s character is shown in a public-washroom, imitating the same rage that his character from Arjun Reddy did. He picks up a random and unnecessary fight, comes out and bangs a phone from the public telephone-booth over and over again. We get the same ‘angry young man’ bravado and apparently, this was again while attempting to get over a girl. Cut to the past where he’s this hero-figure from his college, fighting for a ‘righteous’ cause and being, as expected, incredibly rude about it. The title track of ‘Dear Comrade‘ plays in the background for a person who doesn’t fully understand what it means to be a comrade, apart from being an aggressive hothead with a feeling of a rebel.

There’s enough to despise or morally object in these few moments for all the SJWs, even when his charming bravado almost wins you over. That perhaps is the power of the actor himself. Vijay Deverakonda, who brought me back to witness him on the big screen, without essentially having followed Telugu cinema. And surprisingly, even after such beginning, it is the female lead-Rashmika Mandanna, who wins you over. More power to the character-shifts and the infectious music which kept me glued to the screen, despite the generic clichés.

Rashmika’s character, Lilly comes into his life by accident. After one of his usual fights, he crosses her path and their lives get tangled with one another much like any other romantic comedy for that matter. Despite tapping on the generic bits, the direction in parts is so admirable where even the tiny, clichéd moments make a lasting impact. Credit goes to the performances which keep us hooked despite the same-old moments. But the script starts taking the charge when the anger-management issues start to resurface, changing their dynamics. This doesn’t look like the lovable Bobby that Lilly fell in love with or the one who promised to never get in the way of her career to rather be a part of her journey. That arrogance destroys his image in her mind. 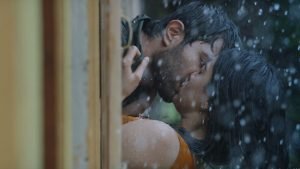 Although what unveils later with the scenic beauty while Bobby was trying to find ‘the meaning of his life’ is impactful, it is a little too generic and devoid of any elaboration about his arc. The whole sound-engineering gig works merely as a plot-device that needed more depth to understand the character’s ‘sudden’ healing. The further plot deals with his eventual encounter with Lilly and the regret of not trying to find her in the years in between. The classic couple-conflict happens where she falls in love with the matured-‘him’ and where he has gotten over her way earlier than that. The conflicts that keep her in a self-inflicted shell at the time challenges the romance between these two. And at the same time, the film becomes more about their individual characters that have grown up to stand for something that is worth. That leads to a particularly melodramatic finale which is probably fitting, yet a little out-of-place.

Despite all of the clichéd shortcomings, the film is particularly refreshing for the way it handles its gender-dynamics. Here, the girl doesn’t need a savior and stands for herself when the men around her assign themselves to these roles. She decides for herself even when it isn’t particularly righteous in the wider sense. At times with the burning ideas of justice, the individual voice is not heard. The film addresses that and presents a female character in that mold.

Besides, whether it is Bobby’s journey through his anger-issues or even her tumultuous journey towards fighting for her self-worth, with herself; the characters are considerably well fleshed-out with the obvious minor hiccups. One of them being the overall length with scenes that don’t serve any purpose for either arc.  And none of it made me stop from falling in love with their chemistry, their individual performances, the music (which deserves a little more praise perhaps) and the way that even the smallest scenes were directed. The film is about fighting for what you love and it certainly seems clear about its intent.

The Hole in the Ground [2019] Review: Squandered Potential