For more than three decades, Mani Ratnam’s films represent a form of technically robust Tamil cinema. And hence some of his visual inventiveness naturally shines through despite the film's emotionally disjointed scenarios

With crime/action drama Chekka Chivantha Vaanam (‘Crimson Red Sky’, 2018) ace Tamil film-maker Mani Ratnam once again plows through one of his pet themes, albeit in a rickety manner: conflicts and friction inherent in the relationship between zealous men of power. It starts with an assassination attempt on a powerful aging don (Prakash Raj) and the shock waves of this news is used as a good framing device to introduce us the don’s ruthlessly enterprising yet wildly different three sons (played by Arvind Samy, Arun Vijay, and Simbu). Each of the actors receives attention akin to mass-heroes, their dangerously suave posture perfectly polished with artifice and markedly effective AR Rahman score. The sons’ suspicion immediately falls on the leader of a warring clan. However, what follows is not an explosive gang rivalry but an implosion that pushes three brothers to fight over their father’s throne. Vijay Sethupathi plays an alcoholic, suspended police officer with ulterior motives, who has established strong ties with the mob family through his friendship with the eldest son.

Although the writing is considerably less shallow than Mr. Mani Ratnam’s recent ventures, the biggest drawback of the script is the great emotional detachment we feel for its roughly drawn characters. All the central alpha-male figures don’t seem to have any character and courage. Arvind Samy’s Varathan could be defined as foolhardy, Arun Vijay’s Thyagu is assertive, and Simbu’s Etti is nonchalant. And there are no more layers beneath this description. Even when the illusion of their power begins to recede, they stay true to these one-note sketches. The writing doesn’t estimate the depth of these men’s violent motives but simply goes for a dispassionate observation with no ostensible component of empathy or understanding. Only Varathan’s monologue towards the end get hold of the flawed, wicked man and allow him to be human (though it arrives a bit too late). Nevertheless, the actors playing these roles keep up their stylistic demeanor to somehow mask the uni-dimensional portrayal. 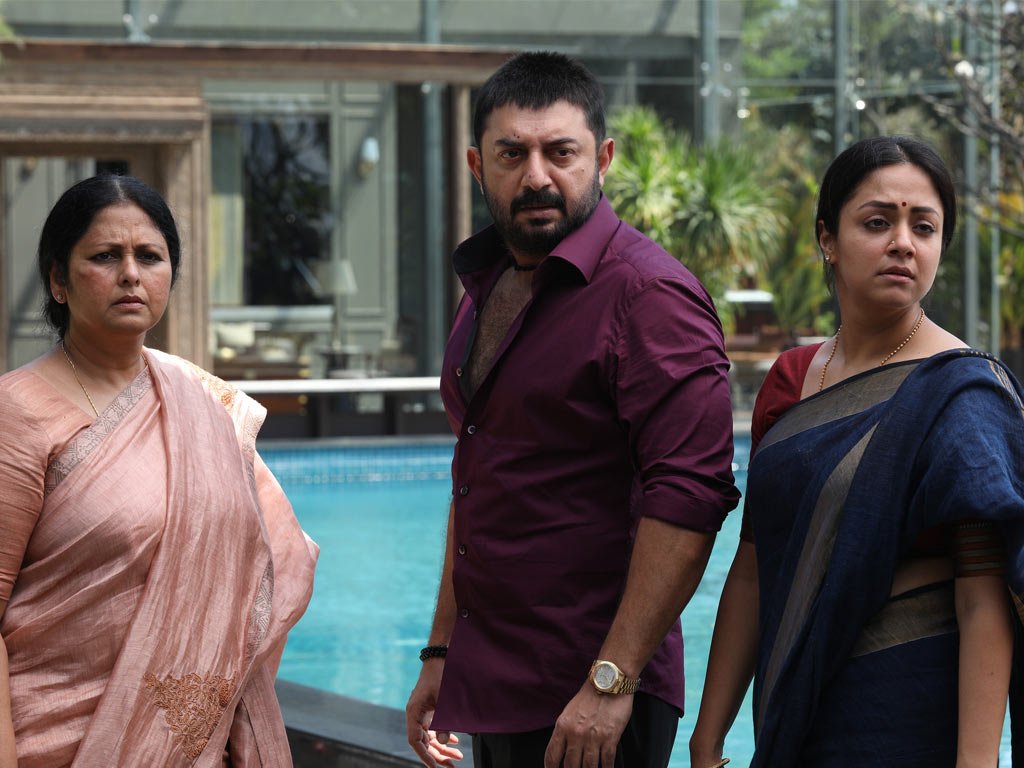 Vijay Sethupathi is one of the actors who play a variation of the same characters and yet his screen presence manages to create an undeniable charm. While all the other three actors boast usual mannerisms of Mani Ratnam hero, Sethupathi remains unaffected by that mood and he effortlessly continues his routine of spouting witty one-liners with a delightfully straight-faced expression. Interestingly Sethupathi’s Rasool felt less one-dimensional than others, even though we could sense it only in retrospect. The revelations towards the end aren’t particularly surprising, but it purges some of the tediousness in the second-half. Mani Ratnam has often framed songs as part of his storytelling process; not as a grandiloquent fantasy. But here the minimally used musical numbers only chews the scenery and define emotions within a very short span of time.

For more than three decades, Mani Ratnam’s films represent a form of technically robust Tamil cinema. And hence some of his visual inventiveness naturally shines through despite the emotionally disjointed scenarios. There are two terrifically staged scenes involving the matriarch (Jayasudha) of the feuding family. A mirror and a glass wall is put to brilliant use to convey the roiling emotions of the mother as she powerlessly watches the beginning of their end. The writing once again disappoints on this regard, since the mother character largely vanishes as the disputes turns bloody (even the scene she goes to visit her youngest son Etti have zero impact on the proceedings). It’s the kind of narrative thread if pursued may have brought more depth, but the film-maker decides to encourage action than personality. The other exquisitely crafted sequence comes at the end: a circling vehicle at the top of a crimson red cliff, set against a picturesque blue sky. The circle fascinatingly closes in, entrapping the souls of these worthless individuals.

Overall, Chekka Chivantha Vaanam (143 minutes) is a fairly entertaining feature with relentless bloodshed, gripping performances, and eventually nothing much to reflect over or remember.