Paul Feig, the man best known for comedies has attempted to make a suspense thriller with A Simple Favor. After the failure of Ghostbusters (despite positive reviews), he’s back with a book adaptation. And he has rather delightfully succeeded. A Simple Favor is a unique film, a blend of genres I haven’t seen in a while. As a comic – thriller it works because of how self-aware and undeniably entertaining it is.

Anna Kendrick plays Stephanie, a hardworking and loving single Mom. She befriends Emily (Blake Lively) owing to play-dates between their children. One day, Emily asks Stephanie to pick up her son from school and then goes missing. To say any more would be dwelling into spoiler territory so I’ll leave it at that. 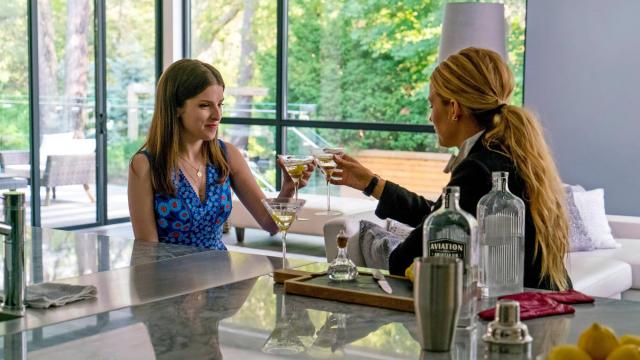 The casting is top notch as both Anna and Blake have terrific chemistry and slip into their roles perfectly. Blake Lively is an absolute scene stealer, much to the credit of her terrific dialogue delivery of multiple quotable lines. It also helps that the costume designers do stunning work on her outfits and she rocks them. Anna has the less glamorous role but it’s a treat to watch the layers of her character peel off and see her performance transform through the film. Henry Golding as Sean, Emily’s husband is a fine addition and does some solid supporting work. The kids are spot on in their few scenes too.

The narrative twists and turns and though you always have a general idea of where the film is headed, it’s almost impossible to guess the details. It’s some true edge of your seat storytelling. Even in the last few minutes, I wasn’t entirely sure of how they’d tie it all up. The characters are well written in shades of grey with all of them having their secrets. The fact that they’re all flawed makes them more interesting and doesn’t let you root for one too much over the other.

While the film does a fine job of tonally transitioning for the most part between its thriller and comic tropes, there are a few instances of this being a bit jarring. Another issue I had was the films pacing. It takes plenty of time to set up and establish but then rushes through some key plot points and revelations later on. This could be intentional so as to not give you enough time to think about how bizarre some of the twists truly are.

Despite being a low budget production, the film looks and feels like a high-quality affair. Credit to the cinematographer and set designers for accomplishing that. There are a few notable scenes in which the camerawork and music really shine to create the required atmosphere of dread or anticipation.

A Simple Favor is a delicious cocktail with strong flavors of an engaging plot and fine acting presented elegantly. It has some sour notes and isn’t very memorable. However, it will give you a good buzz and a good time. Try it out at a theater near you.