“12 Monkeys unfolds in an episodic manner, the composite parts doesn’t smoothly get unified as a whole. Yet the precision with which Gilliam directs each of these time-hopping episodes is compelling to look at.”

Terry Gilliam is one of my favorite film-makers. I like the way he deals with the macabre things while displaying the high-spirited delight of cartoons. He has often left us dazed, disoriented, and even frustrated about what we have witnessed on screen, for instance, Fear and Loathing in Las Vegas, Tideland. At his best, Gilliam’s brilliantly detailed and distinct visual style has offered profound criticism on the political establishment.  Gilliam is also one of the film-makers whose works provoke divisive reactions among movie-lovers. Some highlight his uncanny authorial style and call him a satirical genius, whereas others find it hard to warm up to his cockeyed vision of society.

A graduate in political science, Terry Gilliam is often mistaken as an English man although he was born in Minneapolis and grew up in Los Angeles. That’s because of his association with the Monty Python troupe. Gilliam left for England when he started working in films and hasn’t lived in the States from then on. Right from his first solo directorial effort, Jabberwocky (1977), Gilliam has remained strictly anti-Hollywood; the wildly imaginative and gleefully cynical aspects of his narrative weren’t toned-down to fit itself within the inane big-studio spectacles. Apart from the masterpiece Orwellian masterpiece Brazil (1985), the film-maker has made a string of anachronistic and unorthodox comedies like Time Bandits (1981), The Adventures of Baron Munchausen (1988), and The Fisher King (1991). 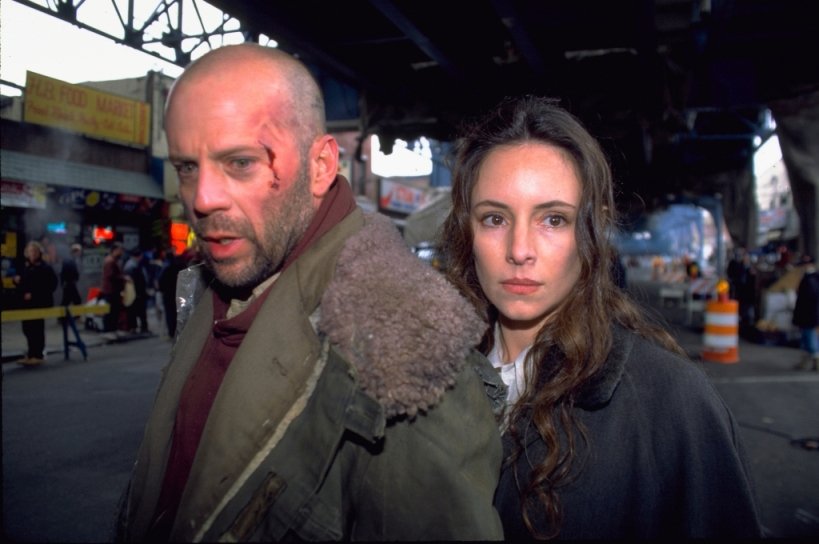 Of course, Gilliam has run into a lot of problems while trying to forge his distinct vision. Brazil was released after a lengthy battle with studio execs. He faced troubles with his next film Baron Munchausen, which not only far exceeded the budget but proved to be a box-office disaster. Gilliam’s next film starring Jeff Bridges and Robin Williams (The Fisher King) was a decent hit and received quite a few Oscar nominations. Then he took three years to land on an interesting project, a dystopian sci-fi drama that shares some of the themes – paranoia, oppression, fear of establishment – he dealt with in Brazil (1985). 12 Monkeys (1995) was a big hit, made with a modest budget and major Hollywood stars like Bruce Willis, Madeleine Stowe, and Brad Pitt.

Related to 12 Monkeys: 10 Best Time Travel Movies Ever Made

David and Janet Peoples’ script for 12 Monkeys was loosely based on French artist Chris Marker’s twenty-nine minute 1962 (photomontage) movie La Jetee. The Peoples’ script is a solid yet a slightly mainstream take on Marker’s astounding fable about memory, destiny, and loss. Nevertheless, the distinctive Gilliam-esque look and style enliven the film throughout. Twelve Monkeys opens in the year 2035. The earth as we know it is obliterated by a deadly virus, killing 5 billion people.

The surviving one percent human population ekes out a living in a subterranean city. The scientists of the age have invented a primitive time-travel device to collect some information on the bio-terrorist(s) who unleashed the virus; not to change the past, but to find a cure in the present. For the fact-finding mission, the scientists choose a bald-headed convict named James Cole (Bruce Willis) and he becomes the guinea pig to make the not-quite-perfect time-travel. Lured by the promise of a pardon, Cole takes the trip. But instead of sending him to 1996 (few days before the release of the virus), they mistakenly ship him to 1990.

The disorientation caused by the time-travel and other factors land Cole in a mental institution. And Cole’s story easily gains him the labels, schizophrenic and mentally divergent. At the mental asylum, Cole meets a rambling, psychotic patient, Jeffrey Goines (Brad Pitt), and a sympathetic psychiatrist Dr. Kathryn Railly (Madeleine Stowe). Cole believes a renegade organization known as The Army of 12 Monkeys is behind the release of the killer virus. The scientists of the future eventually rescue Cole from 1990 and send him to 1996, not before he is mistakenly parceled to a battlefield during Frist World War and gets shot in the leg.

In 1996, Cole Kidnaps Dr. Railly and tries to find the headquarters and members of the 12 Monkeys, which happens to be an animal rights organization, actually founded by Jeffrey Goines. Goines happens to be the wealthy son of a distinguished virologist (Christopher Plummer). Cole’s journey through time is often interspersed with a dreamy vision of destiny, which is also hinted as a piece of lost memory. 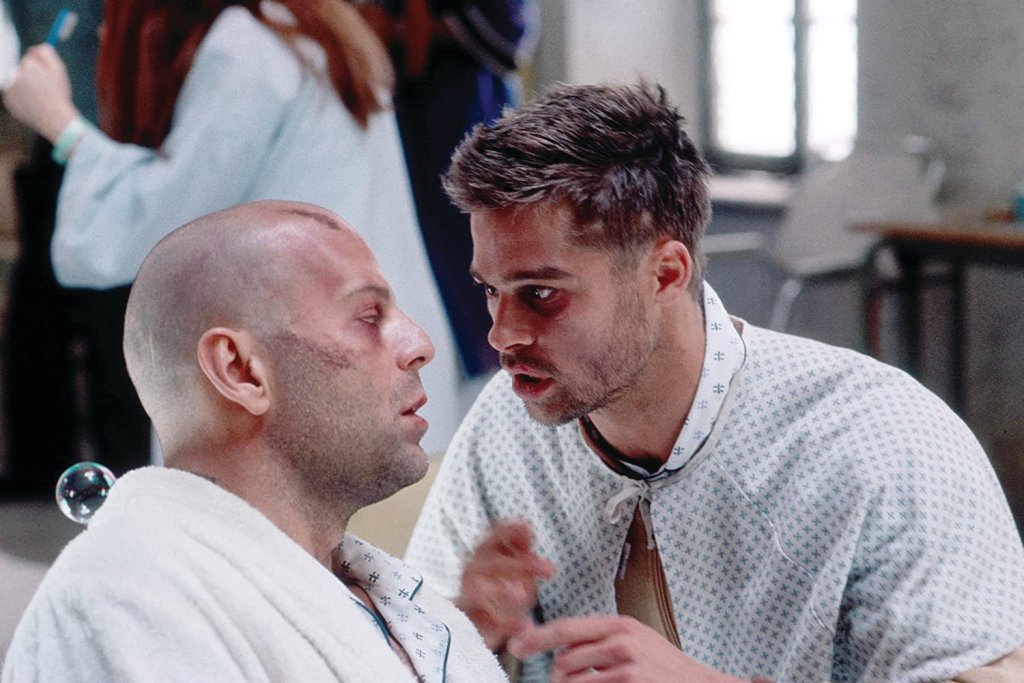 Twelve Monkeys unfolds in an episodic manner, the composite parts doesn’t smoothly get unified as a whole. Yet the precision with which Gilliam directs each of these time-hopping episodes is compelling to look at. The fateful romantic destiny referred to in the second-half (paying due homage to Hitchcock’s Vertigo) between Cole and Dr. Railly doesn’t come across as convincing, although Gilliam directs these portions well, as he slowly moves from the eccentricity and dark humor of the first-half to instill feelings of melancholy. Gilliam’s aesthetic choices also keep the audience uncertain about what’s real and what isn’t.

Terry Gilliam often treats atmosphere as one of his primary characters, and the tone of madness that pervades his narrative is of course channeled through this meticulously constructed atmosphere. Hence, the insanity-tinged surroudings we witness in the doom-laden future and mental hospital dayroom initially made me think that time-travel may actually be a figment of Cole’s delusional imagination. Moreover, the director’s predilection for objects from the industrial revolution (ducts, gear, pulleys, etc) is apparent in the way he envisions the grim, underground industrial landscape of the apocalyptic future.

The top-notch performances also help to keep the ambivalent mood in the narrative. Bruce Willis never looked this vulnerable and anguished on-screen (of course four years later he did ‘The Sixth Sense’). Willis was particularly great in the scene he kidnaps the psychiatrist and asks her to drive him to Philly. He brilliantly veers between emotions of sadness, caution, and childlike ecstasy; one minute talking about the doomsday and the next listening to a song in the radio with joyful abandon. Pitt’s supporting performance (which gained him an Oscar nomination) as Goines which is full of nervous ticks and meandering, fast-paced monologues, may not work for everyone. However, I found his performance to be immensely entertaining and Goines perfectly looks like a Gilliam’s creation rather than that of the scriptwriters – a character that shares some parallels with the devilish air-conditioning expert played by Robert De Niro in Brazil (1985).

Overall, 12Monkeys (129 minutes) is a complex and hugely entertaining time-travel mystery that relies on the strong cast and excellent imagery than on the vapid CGI spectacle.

Enemies of the State [2020]: 'TIFF' Review – Bizarre hacktivist documentary unravels that everything is political