“It remains to be seen whether the film is any good. But at this point, it almost doesn’t matter. It will be a long time before The Man Who Killed Don Quixote can be seen just as a movie, separate from its long saga of dreams and woes and catastrophes.” – Alissa Wilkinson, Vox

The long, long awaited passion project of director Terry Gilliam, The Man Who Killed Don Quixote, is finally completed and will premiere out of competition on closing night at the 2018 Cannes Film Festival. The near-30 year long development hell that it’s gone through, including numerous false starts, collapsed financings, revolving door of cast actors, and one failed foray into shooting in 2000, is finally over. This has all been summarised in a variety of publications in just the past month, including Rolling Stone, Vanity Fair, BBC, and The Telegraph, as well as an upcoming documentary on the shoot from the documentarians who brought us Lost in La Mancha (2002) about the failed shooting in 2000. It’s an exciting moment in the world of film, but it seems unlikely that the merit of the film itself will be visible through all the back-story of this production hell.

There’s the feeling that this film will be seen more of a historical event in cinema, rather than as a film itself. It seems impossible to separate the two, but rest assured, all professional reviews of it will likely begin addressing the production first, and may likely even spend more time on that than the contents of the film itself (I’ll be on the look-out for that).

I guess it’s inevitable that any review of it must address the production, but does every single review need to spend more than even half a paragraph reiterating the production hell? Do we need to be told another hundred times the innumerable hardships Gilliam and co. faced? I’m hoping most of the professionals can quickly make mention of the unending production back-story and then get straight into the film’s contents and themes themselves (even if they may, or likely will, relate them to the troubled filmmaking). It may seem unbearably unnecessary, since if people have heard of this film, then they must surely have heard about the troubled production (likely even more than the film’s actual plotline).

There is a temptation to believe that a film that’s been so difficult to make must be a masterpiece unlike any other once it’s completed. But in reality, a film with a production hell like this can either be an Apocalypse Now or a Heaven’s Gate, or maybe somewhere in between. I’m curious to see for myself if such a difficult film to make yielded an excellent result.

Nonetheless, on the plus side of a film’s production being delayed for so long, the film itself (namely its pre-production stage) has been sharpened to what may be perfection. Co-writer Tony Grisoni has stated “every year since we have rewritten the screenplay. And we’ve got quite good at it.” Gilliam told Indie Wire “along the way there have been so many versions of this film in my mind and it changed with each cast, and finally this year I think I got the perfect cast,” and specifically referred to Adam Driver (who’ll play Grisoni), calling him “the guy I’ve been looking for all these years.”

Quixote actor Jonathon Pryce (who was previously set to play a different, younger character) has claimed “from what I can remember of the original script, this is an altogether better version. It’s a clearer story. Terry’s done a lot of rewrites – and he’s had a lot of time to do rewrites”. And Gilliam has said the same of Pryce: “Jonathan has been wanting to [play Quixote] for 15 years […] and now he’s here and he’s just extraordinary. So it’s as if the time was right: everything seemed to be ready to make this thing.” So … I guess it turns out all those hardships were for the best, the planets have now aligned, and we can expect the greatest version of Gilliam’s film this time round. But who knows if we had waited any longer, if the production would’ve been even more refined. 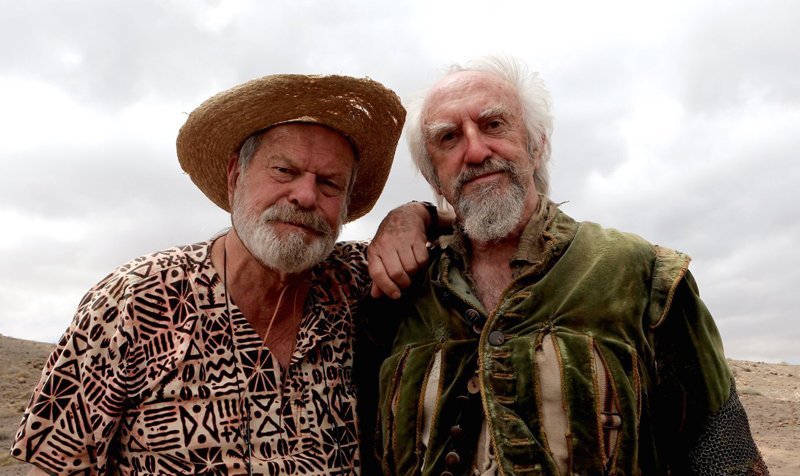 There’s the unfortunate possibility that the film may be, on its own terms and on its own two feet, simply a let-down. All of Gilliam’s films on this side of the millennium have been lukewarmly received, as opposed to the classics he made on the millennium’s other side. There just be that nagging possibility that just over three decades of turmoil have only yielded a mediocre affair.

But enough waiting has been done, and the film press are salivating and practically pre-reviewing this legend of a film. Alissa Wilkinson of Vox flat-out claims “it remains to be seen whether the film is any good. But at this point, it almost doesn’t matter”. She further states “It will be a long time before The Man Who Killed Don Quixote can be seen just as a movie, separate from its long saga of dreams and woes and catastrophes” – it may be hard to separate the film from all its back-story baggage (actually, it won’t be), but disastrous productions have risen above to be criticised on their own merits (such as Apocalypse Now or The Revenant). Wilkinson has delivered to us one of the most basically nihilistic quotes of art to be seen in recent film journalism (and that’s saying something).

Gilliam will certainly go down as one of the most persistent and dedicated directors to have ever lived, even if this whole Don Quixote mess had never happened. He’s suffered through enough on so many other projects, yet always (well, most of the time) managed to get his way by absolutely planting his foot down and making sure there was little negative interference with any of his films (particularly from pesky producers).

After all these years and decades, Gilliam is finally bringing his story to an audience, unaffected and unaltered by other meddling hands. Cinephiles must feel a sense of relief for him that this labored production of love is finally complete with a happy ending, yet there must also be a sense of frustration that this story he struggled so long to convey will be drowned out by the enormity of its surrounding story that he didn’t intend to tell. It’s unfortunate that The Man Who Killed Don Quixote will be released in this context, and all that can be done by Gilliam fanatics is to fairly watch and judge the film, setting aside its troubled production as a whole other tale.