Yolanda Ramke and Ben Howling’s slow-burn zombocalypse film Cargo (2018) does sound like yet another genre picture with tiring visual tropes. The familiar conundrums associated with the undead are present here. Nevertheless, what bestows Cargo with a unique touch is its setting: the barren and beautiful Australian Outback. Time and again, Australian landscapes has inspired a sense of cinematic terror and adventure (‘Wake in Fright’, ‘Walkabout’, ‘Picnic at Hanging Rock’, ‘Mad Max’, ‘Rabbit-Proof Fence’, etc). In recent times, Zak Hilditch’s ‘These Final Hours’ (2013) and David Michod’s ‘The Rover’ (2014) told pensive dystopian tales, set in the lawless wasteland of outback. Directors Yolanda and Ben, adapting/expanding from their viral short film of the same name, tries to include a very Australian perspective on the zombie sub-genre. The script isn’t entirely free from the usual clap-traps of this setting. Yet there are enough emotionally resonant moments and idiosyncratic social/cultural context to keep us engaged.

Cargo is less concerned with thrills and more invested with the human drama. So it’s better to not expect the chilling visual mechanics of Romero’s ‘Dead’ films or Danny Boyle’s ’28 Days Later’. The film opens with series of magnificent wide shots, compiling the Outback’s beauty and decay in equal measures. Black smoke, ashen trees and dull-colored River embellish this pandemic-hit post-apocalyptic world. Along the river, married couple Andy (Martin Freeman) and Kay (Susie Porter) live with their infant daughter Rosie in a houseboat. The vessel is perfect enough to reach the allegedly safe military base. And, by sticking to the water they have largely avoided the undead horde. But the dwindling food supply — would only last for four meals if they go to quarter rations – is a big concern. However, Andy is relieved when he finds a wrecked yacht containing abundant supply of canned foods and toiletries. 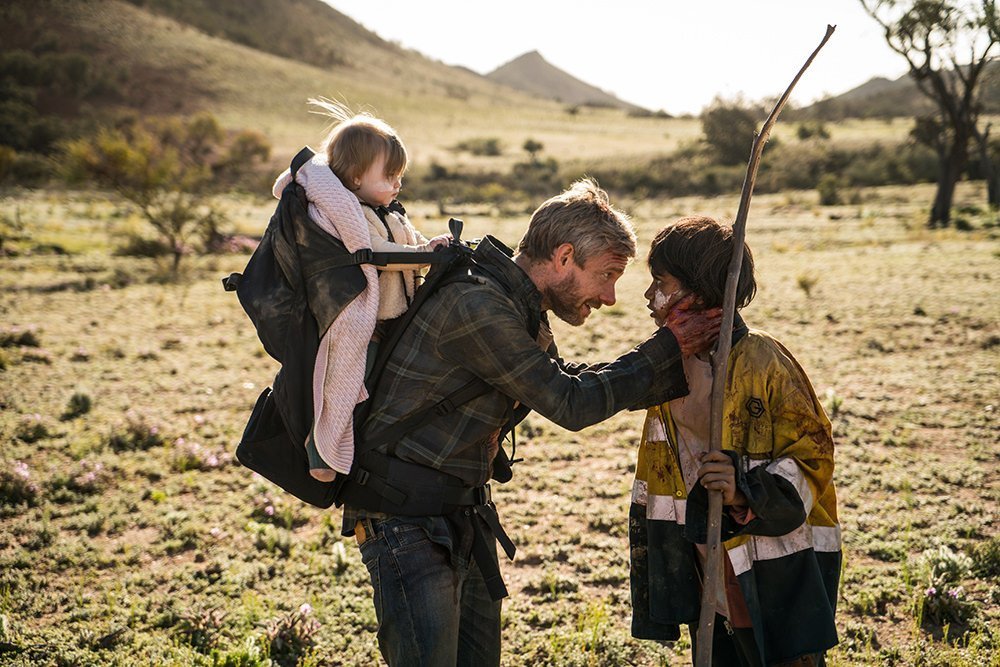 Alas the relief is only short-lived as the doomed white-family is forced to leave the quiet river life, in the face of a tragedy. Soon Kay dies, and Andy has infected himself. One of the symptoms of the mysterious disease includes the infected discharging sticky substance that resembles Paddington’s marmalade. Andy has 48 hours to evade the flesh-hungry monsters and find a safe sanctuary for Rosie. With a count-down timer attached to his wrist and the baby strapped to his back, Andy walks into the ravaged land. Before long, Andy encounters Thoomi (Simone Landers), a pre-teen indigenous girl, bounded to traditional Aboriginal ways. Even though she’s separated from her community, Thoomi has a firm sense of the lay of the land, which might be central to Rosie’s eventual survival. Meanwhile, the Aboriginal spiritual leader ‘clever-man’ Daku (David Gulpill) and others use ceremonial methods to cleanse the land from sickness.

Director Howling and Ramke aptly don’t waste time to explain the deadly contagion. They however add certain grimly fascinating elements to the pandemic and undead mythos: for example, the emergency kit or the design of hibernating pus-riddled zombies burying their heads in the sand. Like most other recent horror films, Cargo employs parental fear in raising children in a world overrun by literal monstrosities. It also heavily leans into social commentary, indicting the nation’s cultural disharmony and environmental destruction. Howling and Ramke aren’t exactly subtle or restrained with their thematic concerns. But the fact that such social subtexts are found within a generic set-up pushes it well-above most of flagrant zombie flicks. “Frack Off!”, reads a sign Andy finds closer to a mine, which conveys the sense of moral decay prevalent before the onset of virus. Later the Aboriginal sage forlornly remarks, “They’re poisoning this land you know. This country’s changing. It’s sick. We all get sick.” The narrative’s villainous character Vic (played by an intense Anthony Hayes) is shown as the personification of moral malaise afflicting the land, much before the pandemic outbreak.

Geoffrey Simpson’s sumptuous cinematography of the vastly unique geography enlivens the narrative with rich sense of atmosphere. Moreover, the outback setting, naturally adorned with few artifacts of civilization, wrings fair amount of post-apocalyptic thrills. While Cargo does well in gleaning (obvious) parallels between the country’s dismissive treatments of its natives, it admittedly falters when it comes to delivering pure genre pleasures. The zombie menace is largely absent here as the creatures are often pinned to the background in blurred shots. There aren’t much edge-of-the-seat altercations or convincingly terrifying attacks. Yet the character-driven approach and decent performances sets it apart from this over-saturated sub-genre. Martin Freeman demonstrates his ability to do some heavy character-lifting. I wouldn’t say that he seamlessly vanished into the role. But his typical warm persona bestows the proceedings with fine emotional impact.  Moreover, the strong rapport he shares with plucky and soulful Thoomi (Simone Landers is quite a discovery) adds to the narrative’s charm.

Cargo (105 minutes) is a subtext-heavy, character-driven zombie drama that mostly works due to its heartfelt story and singularly bleak setting. Directors Yolanda Ramke and Ben Howling tries (a touch too hard) to address their nation’s suppurating wounds of the past and present within the commonplace dystopian realm.

The pre-reviews of The Man Who Killed Don Quixote [2018]