Interview with the Vampire (Season 1), Episode 4 Recap & Ending Explained: Episode 4 of Interview with the Vampire brought a new introduction to the story: Louis’ beloved Claudia. She is an integral character in Anna Rice’s book and is one of Louis’ most prized people.  Claudia’s introduction certainly brings kinetic energy to this episode. While the first three had a certain grace and inherent dullness about them, episode 4 is full of energy and dynamism. Claudia, like other children, cannot sit still and her younger blood demands more killing. Episode 4 has plenty of that as she navigates her new reality and the life she will live for centuries. Read our recap and ending explainer of episode 4 of Interview with the Vampire season 1 below.

INTERVIEW WITH THE VAMPIRE (SEASON 1), EPISODE 3 “…The Ruthless Pursuit of Blood with All a Child’s Demanding” Recap:

Daniel has a chat with Vanity Fair on the phone about possibly doing a chapter of his book in the magazine. Since it is ten years old and the subject matter isn’t contemporary, the people over at the magazine are skeptical. Rashid informs him that Louis will be “resting” for the day. The vampire has also generously offered to sponsor Danile’s pending levodopa (just sounds like a mashup of “Dua Lipa” to be honest) transfusion. They have already contacted Daniel’s physician in New York and he has “consented” to the procedure being performed by Louis’ physician. In his absence, Rashid takes Daniel to the reading room. He hands over two briefcases with materials curated by Louis himself in the form of entries about his experiences.

He is also given gloves so as not to infect the diaries. Daniel begins reading them and recounts the time around the second world war when Louis and Lestat were forced to drink the blood of Prisoners of War for some time. He picks up a peculiar-looking book cover and discovers the words of Claudia. In the last episode’s ending, when Louis wandered to the severest struck part of the town to assess the damage he had caused, he went into a fire to save a little girl. Her name was Claudia, an important figure in Anna Rice’s story. Daniel reads her account of how a “tall, fast, and strong black angel” saved her from the fire. The whole ordeal was so surreal for Claudia that she thought she had died and gone to Heaven.

After she is brought into the house, Louis and Lestat have a fight. The former is empathetic to the little girl and wants to save he, while the latter asks Louis to drain her while she is still alive. Her condition is bad and she will not survive the aftermath of the fire, most probably. Quite strangely, Louis almost begs Lestat. The older vampire senses a longing in Louis’ eyes. This unfamiliar but strong desperation came from Louis’ human part which is not dead after all. He misses his own daughter who died in episode 1 and very early in Anna Rice’s book as well. Only Lestat can save her and the older vampire obliges. Claudia remembers her turning into a vampire as “Feeling strong as a street car” as she drank Lestat’s blood.

With new live being breathed into her, Claudia wanders around her new abode and asks questions about the incinerator and her next target.  Louis tells Claudia about their ability to read other people’s minds. That is how he was able to find Claudia in the fire. He then telepathically connects with her and it takes her in shock. The “sacrifice of creation” means that the creator of a vampire cannot hear the thoughts of the person he turned. Finally, Louis has someone to call his own. He does not have to share Claudia with Lestat and relishes that prospect. In her accounts, she calls Louis her “dad” and Lestat her “uncle”. They go on one of her first nightly sojourns. And just like Louis, she acts rashly and instinctively. Against warning, she kills a cop and continues to feed on him even after he is dead. Lesson number 1: do not feed on the dead, Louis tells her. Claudia is unperturbed. She has her young girl metabolism and says she is hungrier still after the cop. Before Louis and Lestat can do anything, she takes another man’s life. “You suck ‘em like frog legs and burn ‘em like trash.” For her and Lestat, blood is “kill juice.”

For now, she sleeps with Louis in his coffin. Soon enough, they get her one but have to kill the undertaker as Claudia isn’t able to contain her excitement. She is truly a brat and has brought her bundle of energy to the otherwise dull household. When she notices Lestat and Louis “sleeping in the same coffin”, she is curious. Her exchanges with Lestat do not go smoothly. Whenever she asks questions about where he came from and how he turned, he always pushes her off. She tells Louis she knows about their love.

Louis gets closer and closer to Claudia as he teaches her to kill “quick and painless”. The morality of their existence is dictated by the choices they make. He calls Lestat’s methods “extravagant”, the opposite of what Louis stands for, and hence, does not go with him at night to see him hunt. Daniel takes a break and chats with Rashid about his faith and the conflict between the God he prays for and his adulation for Louis. Back to Claudia’s accounts. 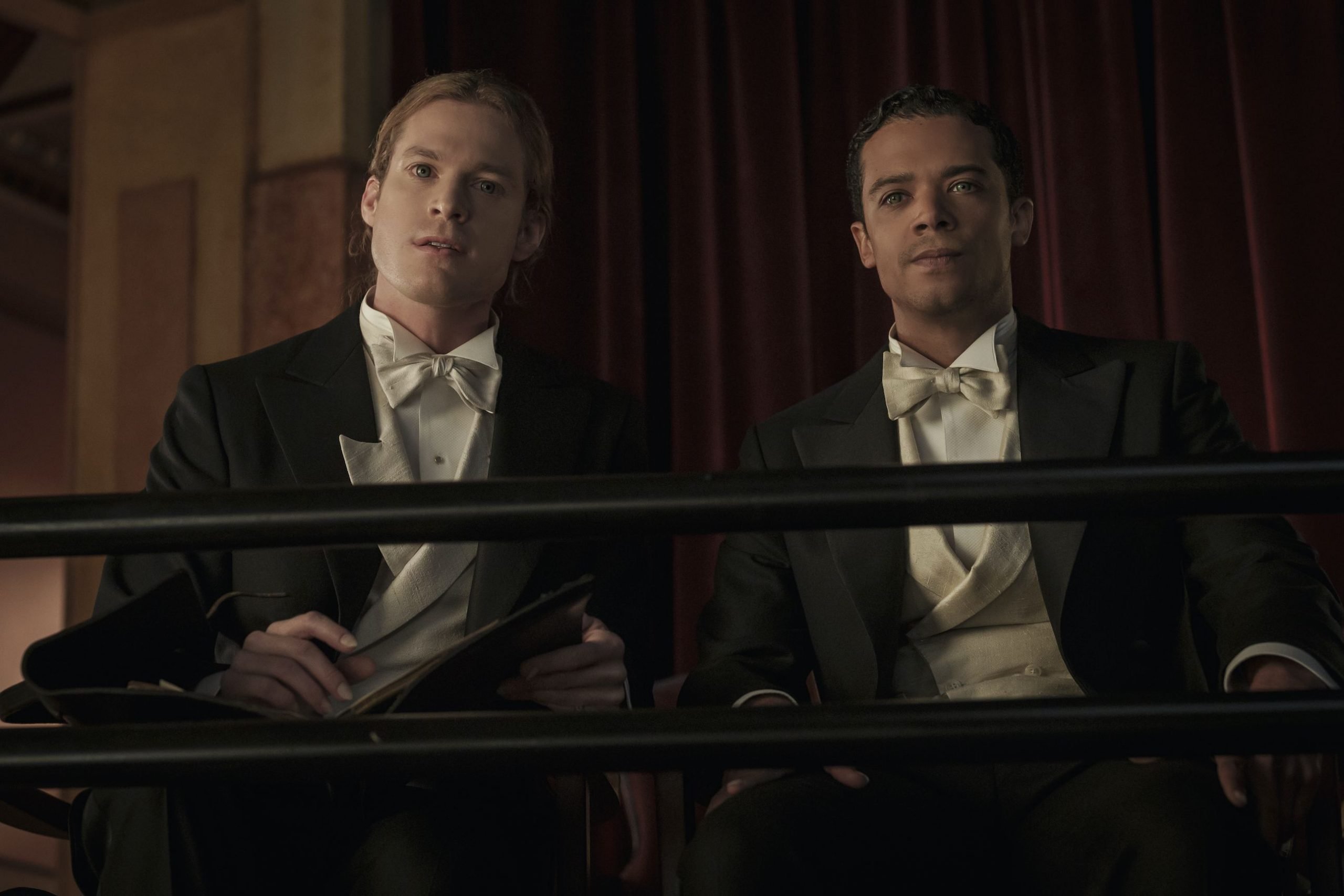 “The Kill machine”, as Daniel calls her, talks more about life as a vampire. Kill and then spend and then repeat that cycle with fighting and merrymaking is all there is to their lives. She acts as a neutralizer for both her favorites and they spend time as mortals do. One day, Louis receives a phone call from Grace informing him that their mother has died. All three attend her wake, which is surprising given how the last meeting between them and Louis went at the house. Grace has actually called Louis to sign the papers for the house and hand them over to her and Levi. Her tone is vicious and ridiculing, signaling there is no redemption left in that relationship.

They even slight Louis for taking in Claudia. He stands strong and leaves the wake, promising not to attend the funeral the next day. Claudia writes that although she loves Lou, she has fun times with Lestat as well. We see the older vampire, almost sixty years old, take her to a dark stretch where young ones come to contemplate. He sends her out to hunt but warns her that this time, their prey will be young and fight back. She must be at her most ferocious to make do. Claudia watches a couple make out and get intimate in the car. Since the woman’s blouse was undone, she sees her body and realizes that she has herself grown into an adult but still dresses like a child. She kills the man, of course, but the woman escapes and Lestat has to interfere. Next time, she must take both at the same time, Lestat tells her.

Lou is angry with Les for taking her to kill the “extravagant” way, as Claudia dishevels her wardrobe looking for fine-looking, adult clothes.  She soon has her first crush on a boy. She meets him as she is about to let her anger get the better of her and attack three girls in broad “nightlight”. The boy drives her home and she melts away thinking about him. He reciprocates her attention and leaves her flowers. His name is Charlie and they have dinner together. It all seems to be going too well for a dark tale. And then comes the shock. As they get intimate in his carriage, Claudia inadvertently bites Charlie and kills him. She does not even realize what has happened and then goes into shock when she sees him dead. She brings Charlie back to the house but Lestat says she has completely killed him and he cannot be turned. It is a painful lesson for Claudia. She must learn to control herself better as Lestat makes her watch Charlie’s burning body.

INTERVIEW WITH THE VAMPIRE (SEASON 1), EPISODE 3 “…The Ruthless Pursuit of Blood with All a Child’s Demanding” Ending, Explained:

Why does Claudia drift away from her family?

Lou walks in as Danielruminates about what he just read. He calls her writing style “Anne Frank meets Stephen King”. Lou talks about Claudia in the past tense so it is quite possible something happened in between all those years. Lou feels he failed her and the fact that Daniel read her writings is a testament to the notion. The vampire calls the day of Charlie’s death the start of a dark era for their family. Everything changed after that. He thought he had lost touch of his “daughter” from that day. The fantasy of their happiness burst and Claudia, who was like the band-aid for their troublesome “marriage”, was finally coming undone.

Claudia’s sadness and anger at killing the man were no match for her frustrations being stuck in the body of a 14-year-old. Since vampires do not look like they age, she will forever remain looking like she is just a child while her mind and spirit grow older than trees. She then walks up on the table and opens the ceiling hatch to let the sunlight in. She gives in her hand to the sunlight and tries to burn herself while writing in the diary that “the fun has just started”. Episode 4’s ending shows the perils of love and how helplessness can sometimes turn into poison for the person seeking redemption. Second chances are a delicate thing. They can just as easily go wrong as they can right. In this case, Lou learns that the hard way.

The ending of Interview with the Vampire Episode 4 was twisty. One on hand, Claudia writes that about her anger at her current condition. She feels that her life, as she knows it, has been ruined and that she is destined to oscillate between devil and angel. She had a solitary chance at finding love and it was her very being that took it away from her. A vampire’s nature is to kill and hunt, as Lestat warned Lou long ago. Claudia is just learning that now. On the other hand, she says “the fun is just starting”, indicating that now, after this incident, she will probably go berserk with her killing spree and be uncontrollable. This alluded to what Lou said to Daniel. “That day ushered in the darkest eras of our lives”.

Where to watch Interview with the Vampire

Game of Love (Time is Up 2) Movie Ending, Explained: Do Roy and Vivian end up together?