In Spite of the flaws and convoluted subplots, Anurag Basu's Jagga Jasoos is a beautiful mess of a film. The references and lift-ups from various films around the world are quite evident but Basu gives his film a kind of charming, innocent banality that you end up forgiving him every time.

Very early in the film, a character points out that there are two sides of the brain – the left and the right. While the left side fears the world that is constantly trying to mock anything that’s different, the right side embraces all the creativity that brims inside. Anurag Basu’s Jagga Jasoos with his child-like innocence and infectious energy does exactly that. Taking pages out of the textbooks of The Adventures of Tintin, framing them in the slapstick humor of Buster Keaton & Charlie Chaplin and donning the world that is part whimsical, part real and partly made out of magic realism and fairy dust (read: Jean-Pierre Jeunet’s Amelie & Delicatessen), Anurag Basu’s Jagga Jasoos is a coming of age film that sings its philosophy to you. It rejoices and embraces its flaws with a sugar rush that is in itself a beautiful thing to behold.

‘Cute’ is what comes to my mind when I try deciphering the latest film in Anurag Basu’s world. Much like ‘Barfi‘ (which also borrows its tone from Jean-Pierre Jeunet’s whimsical comedy – Amelie), Jagga Jassos takes up Jeunet’s dystopian comedy ‘Delicatessen‘ and instead of the circus clown trapped in the underlining gruesomeness of the butcher, we have Jagga perpetuating the world of low-key criminals with his childlike intelligence. He is an orphan who lives in a hospital by the side of train-tracks. Much like other children of his age, Jagaa is a wee bit too curious. His curiosity gets the better of him as he meets Tooti-Footi (a name that comes out of the philosophy mentioned above) who helps him with his stammering problem – ‘You should sing when your words get stuck’ he, says. Jagga & Tooti-Footi soon form an unbreakable bond where the later acts like a father figure giving strength to the already intelligent kid with his strange but beautiful philosophies about the world. 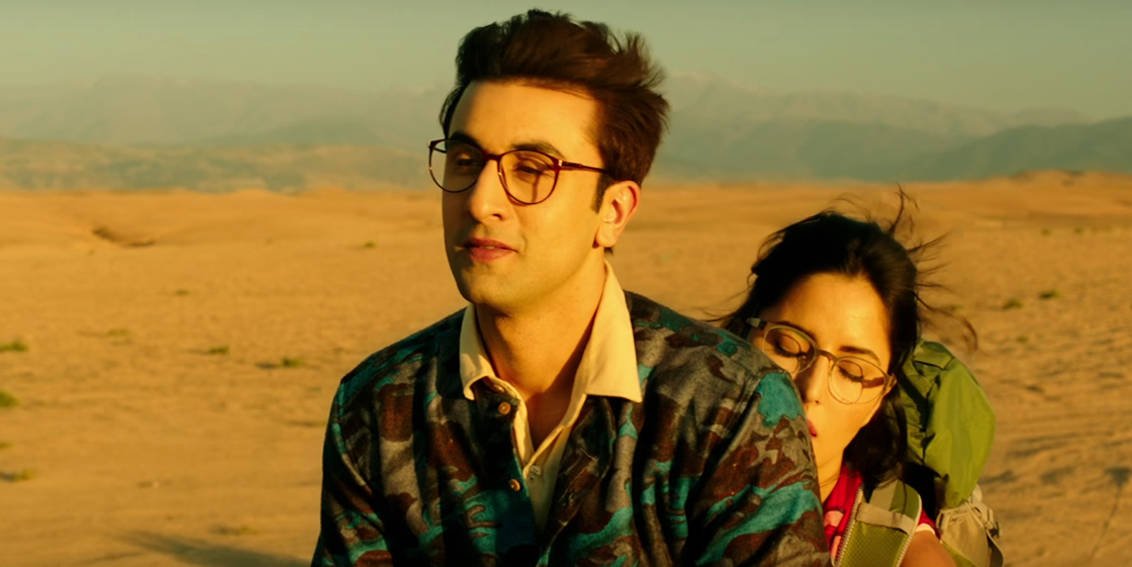 However, things aren’t always good and Jagga realizes that at an early age. Tooti-Footi (his father) leaves him in a boarding school for some reason and goes away leaving the small boy to grow up only on a yearly supply of videotapes. This is where the film really gets into the second part of the title, i.e ‘Jasoos’ (A detective). Jagga is still a man-child who romanticizes everything. Living in the small town of Darjeeling, he rides a self-made bike with skates in the front. While living in the hostel, he often gets his hands on the local open and shut cases like a suicide that is, in fact, a murder. Which also leads him to meet Shruti (Katrina) who he is instantly attracted to. She reminds him of the bad luck that his clumsy father used to poses. When a subplot about arms-deal & Jagga’s dead father comes up, Shruti & Jagga insinuate a journey into the unknown world to find what’s really going on.

There’s no denying the fact that Jagga Jasoos is a technical achievement. An outlandish vision as this one, especially in a country like India is really something we would never expect. I saw people frowning in frustration as the film that starts with Basu’s signature ‘Picture Shuru’ (Here begins the film) song warning the audience to hold off their cell phones in the pockets never seems to stop singing. Which only implies that we are not ready to step out of our weekly dose of unnecessary-similarly-toned mumbo-jumbo. That said, Basu’s film is aware of its flaws. At some point, the narrator of the tale pauses and asks the audience if they are bored.  It’s evident that a narrative that consists of rhymes instead of dialogues is not exactly something that is our forte.

The film, however, needs a change of lens to be really appreciated. It takes around 20 mins to really sink your teeth into what Basu has stored up his sleeves. This is a ball out adventure film told by a 43-year-old man donning a hat that an 8-year-old should wear. His film speaks from all the edges. Ravi Verman’s cinematography, that makes every colorful frame light up with ferocious energy, is the real MVP of this visually stunning film. Basu’s incredible vision of Jagga’s world of innocence where nothing bad really happens is a point of view that needs to be understood. This is a film for every child out there. A song that says ‘Khana Khaake, Daru Peeke, Chale Gaye’ (They ate, drank alcohol and went away) works as a great analogy for the world where only the ones who are important stay till the end.

Basu also dives into social issues like the arms deals which are ruining world peace, farmer suicides and a few other things in the same meandering and not fully realized tone that the film poses. He wishes that the children watching the film are at least aware of these things that have the power to shake the world if not paid attention to. A sharp critic on this aspect is seen in another beautiful number that actually talks about Neebu & Mirchi (Lemon & Chilly – a popular myth in India). Having said that, the second half of the film genuinely feels too long. In spite of Ranbir’s charming performance and brilliant editing, the film feels like it is pushing its potent cartoonish characterizations and lovely realizations to an overused full stop. Also, the emotional aspect of the film – that mostly deals with a young boy trying to find his father and a young girl reeling with the loss of a long dead boyfriend never matches the punch that Basu’s Barfi gave us back in 2012.

In Spite of the flaws and convoluted subplots, Anurag Basu’s Jagga Jasoos is a beautiful mess of a film. The references and lift-ups from various films around the world are quite evident but Basu gives his film a kind of charming, innocent banality that you end up forgiving him every time.

In Response to "They Don't Make 'Em Like They Used To": Rom Com Edition