The biggest problem with making movies in India (or maybe other countries as well) centered around events that impacted hundreds of thousands of lives is that it somehow motivates directors to chuck the basics of filmmaking and storytelling down the drain. It’s as if they think that the raw emotion of that particular event will be enough to move the viewers, while the film can look like an audio-visual version of a Wikipedia page or a hollow, fictionalized retelling of the real stories. And when the marketing department, critics, politicians, and the general audience start to appeal to one’s nationalism, religion, and even caste to get people to watch the film, the craft becomes secondary. Because everyone is so busy ensuring they are “supporting” the movie for the right reasons instead of seeing it for what it is. Jogi (2022) is yet another symptom of this ever-growing problem.

And, like every other day in their lives, they prepare to go to the shop or the office or begin their daily chores. But unbeknownst to them, Indira Gandhi was assassinated by her Sikh bodyguards, thereby leading to the genocide of Sikhs in the country. The manhunt in Trilokpuri is orchestrated by Tejpal (Kumud Mishra), who assigns Rawinder (Mohd. Zeeshan Ayyub) to wipe out the area in which Jogi lives. However, since he is his childhood friend, he helps Jogi and the rest of the Sikhs escape to Punjab. When another childhood friend of Jogi’s – Laali (Hiten Tejwani) – finds out about this rescue mission, he tries to upset it. 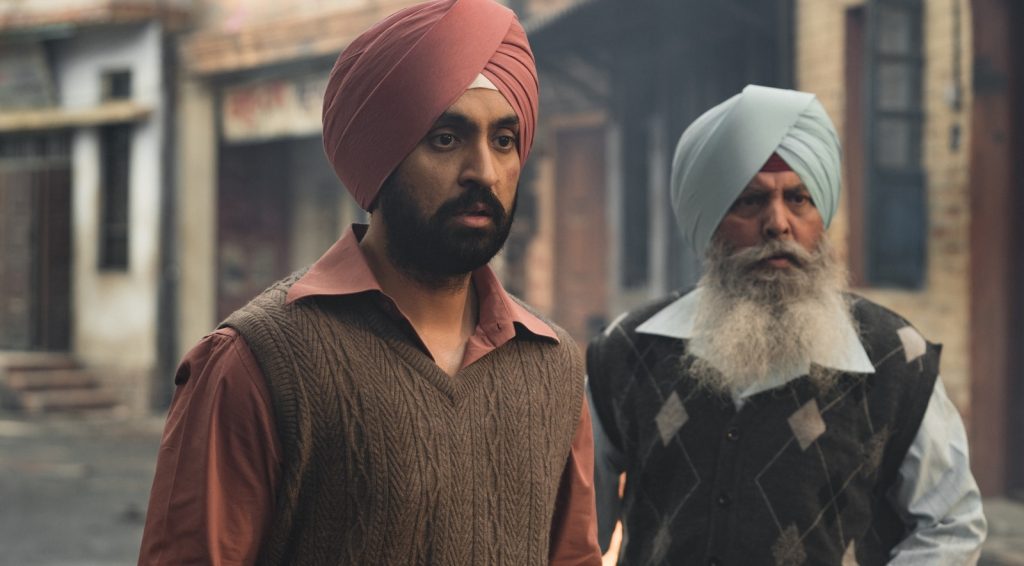 Despite all the critical and commercial success, Ali Abbas Zafar has received over the years, I’ve always found his work devoid of any substance. Mere Brother Ki Dulhan (2011) was fun. So, it got a pass. But everything after Gunday (2014) has been abysmal. And Jogi is definitely his worst directorial effort to date. From the first few frames itself, he shows this absurd rush to get to the riot, so much so that he doesn’t even try to build the characters of his story.

Everyone, including Jogi, keeps reminding everyone else that they must get home by sundown so the audience can understand that they won’t. Why should one care if they make it or don’t make it? Zafar thinks that because these fictional characters (probably) represent real people who were the victims of the 1984 riots, you should automatically empathize with them. However, Zafar, of all people, should know that that’s not how movies work. Yet, here we are.

Given Zafar’s urgency to begin the heist aspect of Jogi, whose tagline is “the biggest human heist,” you’d think it’s going to be thrilling, gut-wrenching, tense, or any emotion that’s synonymous with engaging. Spoiler alert: it’s not. The altercations and fight sequences are amateurish.

The moments where the villains are about to find out that Jogi and Rawinder are poaching Sikhs to Punjab don’t generate even an inkling of anxiety. And every chase, whether it’s on foot or in a vehicle, has no heft to it. That’s because everything from the editing by Steven Bernard to the cinematography by Marcin Laskawiec and the production design by Rajnish Hedao, Snigdha Basu, and Sumit Basu is so flaky and ugly that it makes the viewing experience unengaging.

On top of that, there’s the music by Julius Packiam and Sameer Uddin, which takes you out of the movie as they blatantly rip off Ludwig Göransson’s score for Tenet (2020) and maybe even The Newton Brothers’ score for The Haunting of Hill House (2018).

But guess what? All of the aforementioned elements aren’t the worst things about Jogi. That’s the love story featuring Amyra Dastur that begins when there are thirty minutes left in the movie. Zafar straight-up stops the main plot and goes into a full-blown flashback just to execute the age-old trope of fridging female characters to fuel a male character’s arc. And that’s when you start wondering what the point of using the 1984 riots as the backdrop is. Are they merely setting it in 1984 to follow the trend of putting something related to Indira Gandhi in every other movie?

Believe it or not, she has been the center of attention in about 22 films released between 2012 to 2021. Or are they setting their film in 1984 to comment on fascism and India’s penchant for mob lynching and riots because setting it in recent times will ensure their one-way ticket to jail? Either way, the moral of the story is that filmmakers shouldn’t use a real event if they only want to use its harrowing nature to exploit people’s emotions while masking their poor filmmaking and storytelling skills.

The acting is probably the only saving grace of Jogi. Diljit Dosanjh does a lot. The popular internet phrase that his back must be hurting after carrying the whole movie for over 120 minutes absolutely applies to him. And he does so in what looks to be a very cheap wig. If that isn’t a wig, that’s some of the worst hair and make-up designs. But yes, coming back to Diljit’s performance, he does what he can with the material he has in his hands. He runs, ducks, emotes, romances, and fights to cement the character of Jogi in the audience’s minds. Is it enough? I don’t know.

Mohd. Zeeshan Ayyub does what he always does. He commits. However, since it’s such a one-note character, his commitment goes to waste. Kumud Mishra is supposed to be menacing. He dips his toes into “mustache-twirling villain” territory, and the final result is, quite frankly, underwhelming. Hiten Tejwani is pretty decent. Amyra Dastur is fine. The rest of the supporting cast is there. They hit their marks, deliver their lines, and go home.

In conclusion, Jogi is a waste of a movie. Even though everyone understands the difference between reality and fiction, I’ll reiterate that this review isn’t a critique of the 1984 anti-Sikh riots. This is a critique of the movie, which casually uses the 1984 anti-Sikh riots as its backdrop. The impact and repercussions of that fateful day aren’t lost on anyone. That’s precisely why it shouldn’t be dealt with so frivolously.