A dysfunctional, constantly bickering joint family on a road trip. Strictly speaking from a storytelling point of view, what could go wrong? Not much, as one would find in Mangesh Joshi’s ‘Karkhanisanchi Waari’, streaming on Sony LIV. The name ‘Karkhanisanchi Waari’ means ‘Ashes on a road trip’, which is an indication of what is in the store. Premises like this sets up perfectly for imminent conflicts to rise and take over the narrative. Conflicts, which could be used both for dramatic and humorous effects. Mangesh Joshi takes the turn towards humor and makes it a largely successful journey.

The Karkhani family is no different from a common Indian joint family. They wear their faltering pride on their sleeve, and advocate for the singular identity of the family, overlooking the individualistic nature of each of its members. The struggle for each member to carve their own path, under the big umbrella of the clan, is always something to behold in Indian family drama. However, director Joshi and co-writer Archana Borhade do not sugar-coat the experience, which we often see in such dramas.

Purushottom, the decision-making patriarch, dies; and the untethered Karkhani clan traverses to uncharted water. Most of their life-changing decisions have been taken under the guidance of Purushottom. The opening scene is quite telling in order to portray the lack of awareness of the remaining members of the family. Satish (Mohan Agashe), the next in line after Purushottom, takes the mantle from him as the proverbial head of the family. He wants wooden logs for the cremation of his elder brother, as is the tradition; however, they were not able to afford that. The perpetual struggle between financial security and affinity and pride of tradition sets the tone for the story going forward.

Purushottom’s last wish is to spread his ashes at three different places: at the family’s ancestral home, at their ancestral agricultural land, and to the river Chandrabhaga, at Pandharpur. Thus begins the journey filled with cold and sharp barbs, but also with irregular and sparse moments of familial solidarity. The participating actors involved in this tableau are: Satish, two other, younger brothers Ajit (Ajit Abhayankar) and Pradeep (Pradeep Joshi), sister Sadhana (Geetanjali Kulkarni) and Purushottom’s son, and the other car-poolers’ nephew, Om (Amey Wagh). 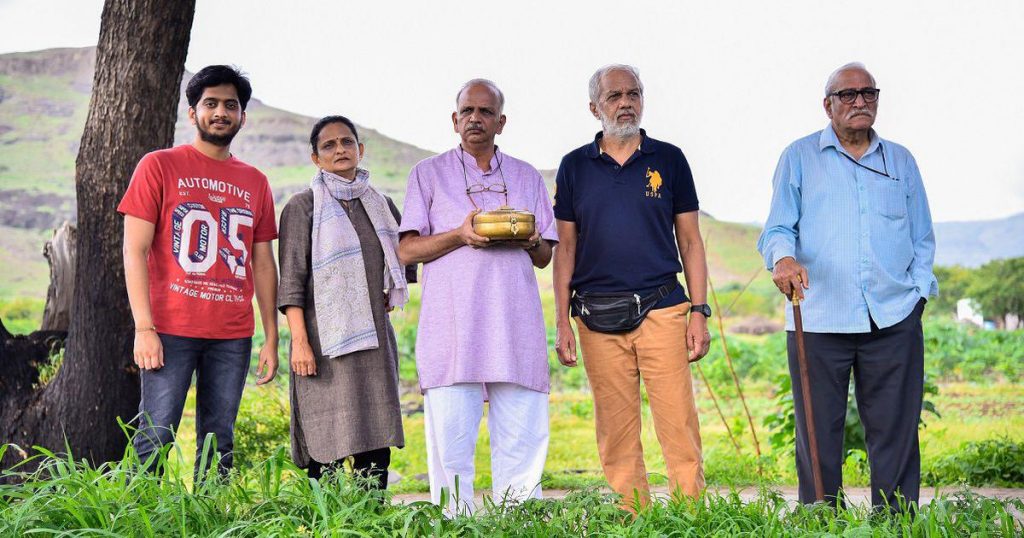 Mangesh Joshi and Borhade’s script deftly establishes the chemistry between these characters. Each of them has their own story too, and the script gives those stories a respectable amount of scope to grow into. Some, like Om’s, have the scope with the introduction of another character in the form of a girlfriend; some like Satish’ need only be mentioned once, of a sacrifice done in the past. The inner conflicts of the characters bubble up and culminate towards a hint of an outer explosion. But, Joshi and Borhade largely avoid the fully-fledged explosion a la “August: Osage County”, at least till the climax, and instead incorporate a constant undercurrent distrust and bitterness among the family members traveling together.

This is how ‘Karkhanisanchi Waari’ sets itself apart from other general Indian family dramas. There is no all-sacrificing, absolute saint in this family. Nor is any climactic sweet realization of familial bond. The characters here are more universal than one usually finds in an Indian film of the same mold. Joshi and Borhade’s script makes it acceptable to acknowledge the unpalatable.

There is also a subplot involving the wife of Purushottom, as she starts to cope with the loss of her husband, and gradually finds out one or two well-kept secrets of her husband. Credit to the script that the sub-plot does not come across as an unnecessary extension, but serves as an ironical twist. One which particularly underlines the ‘no-one-is-saint-here’ policy of the film.

The acting involving notable veterans such as Mohan Agashe, Geetanjali Kulkarni, Vandana Gupte is absolutely top-notch. The line between the characters and the actors gets blurred. They perform cohesively to form the incohesive family on screen. Archana Borhade, the co-writer, is also the cinematographer; and the camerawork is remarkably apt. The only minor complaint might be the usage of songs. For a film that does away with lots of customary clichés of Indian filmmaking, it dabbles with quite a number of songs. However, the songs being melodious, do not become too obtrusive to mar the experience; for it is a fine experience to see unabashed familial squabbling on screen.