Home»OTT»Hotstar»Kaun Pravin Tambe? [2022] Review: Hard Not to Be Swayed by the Hopefulness of This Well Told Story
Hotstar/OTT/Reviews

Kaun Pravin Tambe? (2022) Review: Cricket and cinema are two ubiquitous almost all-encompassing passions of the majority of Indians. Separately, and also sometimes as a collective cocktail. Films that are centered on cricket have always been an alluring prospect in Indian cinema; whether that is a biopic of a Cricketer (2016’s “M.S.Dhoni: The Untold Story”), or a retelling of a glorious feat (2022’s ‘83’), or an imaginative story of freedom struggle (2001’s “Lagaan”). So, when Pravin Tambe made his IPL (Indian Premier League) debut in 2013, at the age of 41, needless to say, the obvious undercurrent of an incredible story was immediately noticed.

Directed by Jayprad Desai, with a screenplay by Kiran Yadnyopavit, “Kaun Pravin Tambe?” (The literal translation would be “Who is Pravin Tambe?”) immediately tries to answer the titular question. The film starts with a clip of legendary Indian cricketer Rahul Dravid, who also played a role in Tambe’s cricketing career, speaking at one conference and mentioning the name of Tambe. Dravid’s quote implied the relative unfamiliarity of Tambe’s name, as opposed to his legendary colleagues’ oeuvre. It highlighted that the story that is about to unfold is not of a sportsperson pushing the boundaries of their sport, achieving statistical greatness. It is of a sportsperson, or rather of a person, who pushes and stretches boundaries of their own limits.

Related to Kaun Pravin Tambe?: 6 Movies About Teachers, Outside the Classroom

“Kaun Pravin Tambe?”, like most hit sport-based stories, is also a classic underdog story. Only It is not a man vs man story. It is man vs age. In a sporting world, when you are at the other side of your thirtieth, generally that is the time most sportspeople would start to reflect on the ever-so-dreading possibility of retirement. One would probably not even dream of a beginning. Even if we forget the physical demand of the sporting world, the self-doubt and perpetually recurring reminders of time gone by are bound to be major hindrances in achieving the goal. In that perspective, it fits the bill for every dreamer who, with time, had shoved their long-harbored dreams in the background for a more pressing matter at hand known as ‘responsibilities’. 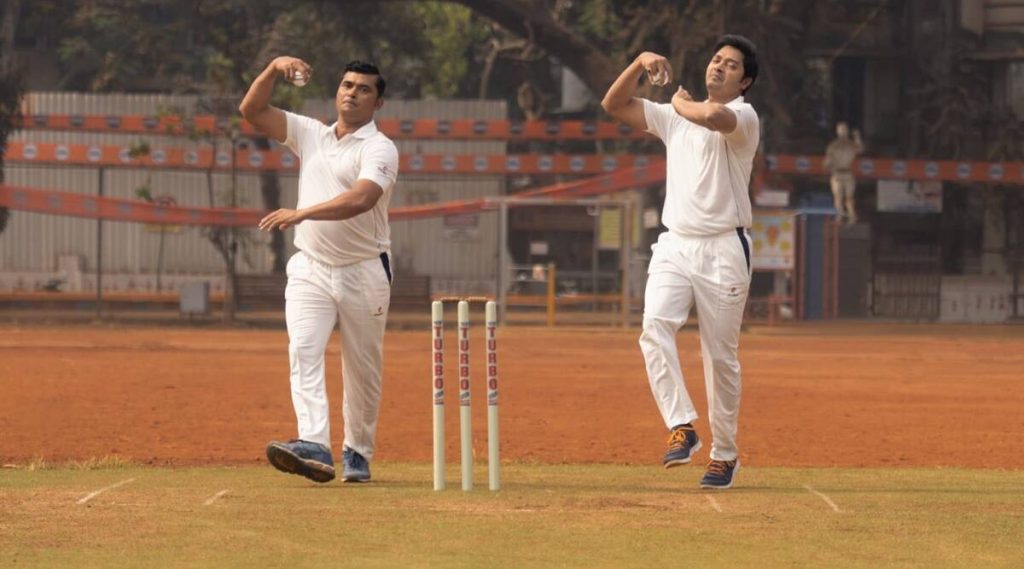 This is where it becomes almost impossible to not be swayed by the unwavering grit and unadulterated perseverance of Pravin Tambe (played by Shreyas Talpade). His goal is to make the selection of his state’s team. But each year, seemingly, takes him farther and farther away from his goal, and one day he has to realize that he is in his forties. Yadnyppavit’s screenplay also brings the same frustration in its storytelling. Barring a relatively quicker depiction of Tambe’s life from his childhood days to having a child, the story focuses more on every rejection Tambe faced in his life. Every instance where it would have been, not only easy but prudent, to say “Enough is enough.” But Tambe never throws the towel. And like the person, his biopic also chooses to give a satisfactory result at the late hours.

Desai’s direction is quite good, to be honest. The particularly impressive feature of this film is how it portrayed sporting actions. I am particularly impressed by the way Desai, with his editor, chose to infuse real-life footage (of IPL match) with the actions he shot. Unlike “M.S.Dhoni: The Untold Story”, here no morphing of Talpade’s face on Tambe’s footage is done. Instead, Desai opted for the basic and traditional way of editing where their shot clips would almost seamlessly mingle with archived footage.

Talpade, who debuted with another Cricket based feel-good film “Iqbal”, is as good as he ever was. His bowling action and cricketing abilities from his Iqbal days definitely helped. He brings the resolute charm and innocence that would be reminiscent of his ‘Iqbal’. One could see this film as a spiritual sequel to that. Anjali Patil, as Tambe’s wife, is unmissable in her turn which is complementary, in an opposite way to Tambe’s hopefulness. She keeps the fairy tale grounded.

Parambrata Chatterjee played the supposed antagonist, Sanyal, a journalist who does not think Tambe has what it takes to become great. The animosity of this character towards Tambe is slightly undercooked, however, the film tries to provide a justification for it. It is understandable why someone would feel the lack of necessity regarding this character, as the biggest antagonist for Tambe’s life is time itself. However, perhaps, Chatterjee’s Sanyal is really not an antagonist. Perhaps he is the representation of everything that is logical and practical; in the end, the skeptic cynicism of that is stumped in front of Tambe’s optimistic tenacity. Perhaps it is indeed okay to be hopeful, sometimes.