Pachinko Season 1, Episode 4: Recap and Ending Explained: Episode four marks the end of Kogonada’s term as an episode director for the show. And this latest episode is arguably the finest of the show thus far. In this episode, Kogonada deliberately ditches the sprawling vastness of the filmmaking. What he chooses to focus on instead is the more human story-telling. The minuscule longing to reconnect to the roots informs the proceedings of this episode.

At times, in art, the emotions are dialed up from a simple human scale. This episode’s traditional and heavy drama is destined to take your breath away. As a result, the feeling becomes larger than something aimed to affect us. The acting, in particular, is compelling. And while it still feels a little stretched, it works because the pacing is fine.

Before we deep dive into Pachinko Season 1 Episode 4, do read the explainer on the first three episodes.

Pastor Isak Baek goes to the local dressmaker to have a suit made. As a matter of coincidence, Koh-Hansu has arrived there too. Mr. Hansu tries to threaten Pastor Baek into leaving Sunja. Baek handles the heat in a relatively peaceful manner. When the dressmaker comes, Baek reveals that he will get married and wants a better suit ready in three days. It’s clear that the bride is Sunja, much to the irritation of Hansu.

Meanwhile, Sunja and Yangjin arrive at the church of Busan. Isak and the Father are already there. The Father is exceptionally hostile toward Sunja’s pregnancy. He’s also critical of Isak’s wish to marry her. Anyway, he weds them on the very spot, despite Sunja being exhausted and having a very shoddy dress. The family returns to the village. Yangjin manipulates the local grosser into giving her three bowls of white rice at a low price. She is insistent on buying it to not let her daughter forget her very roots. As a reply, the grosser tells her that she should have some of it too. This would help her in swallowing her grief.

Sunja encounters Koh-Hansu at the local market again. Since she’s alone this time, she is called into his office. Mr. Hansu makes one last attempt to convince her to leave Isak and stay in Yeongdo. She refuses, saying that Osaka is her home now and Isak, her husband. Hansu angrily pushes her away, declaring that she’ll be miserable there and ultimately have to come to him. And at that moment, he curses her; he’ll not recognize her. 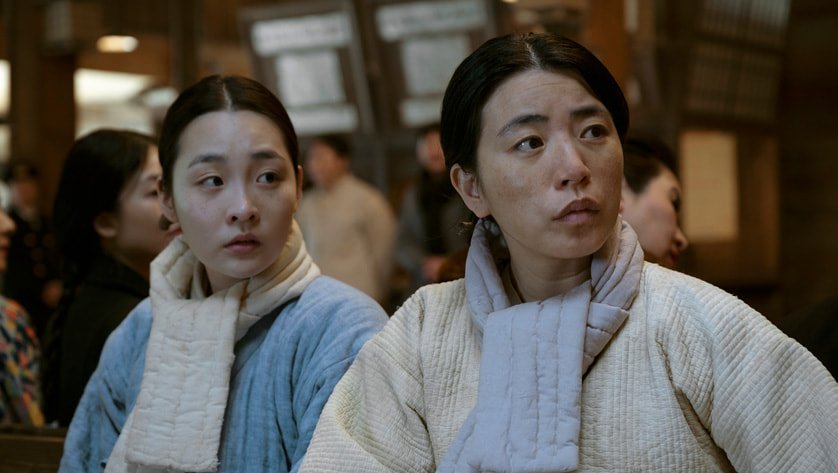 At one point, Sunja is doing the laundry with her two friends, who are siblings. The more cheerful one declares that she’ll cook rice cakes and eat them with all the neighbors at her wedding. Hearing this, the older one scolds her, telling her that they’re penniless and will only marry someone just like them. Both of them cry afterward. Meanwhile, Sunja and Isak share their first meal as a couple on their first night together. The dinner also has the white rice, which Yangjin had prepared earlier. Sunja trembles with emotions while eating it.

The following day, it’s finally the hour of departure. Sunja takes leave from all the neighbors back in her shelter home. She embraces her two best friends as well. Eventually, she turns around to take one last look at her roots. On the port, Yangjin lectures her about the duties of an ideal mother and housewife. Her experience stems from years of enduring patriarchy quietly. Suddenly, a ravishing and fabulously wealthy lady arrives at the port. Her silk back covering falls on the ground. Sunja stands and picks it up for her. She’s a famous Opera singer, Yangjin has heard. The lady smiles at Sunja and tells her that she’ll sing for all of them.

Sunja and Isak board the third-class compartment of the ship. There are all sorts of miners and workers in their compartment. There’s little breathing room for Sunja on the boat. As a result, she suffocates and vomits. Meanwhile, the opera singer is dining in the first-class compartment with the Japanese elites. An older man tries to make advances on her. Soon, she’s singing her opera. Suddenly, she shifts gears and starts singing a Korean folk song. Koreans in the third class compartment rejoice at hearing music that was intimate to them. It’s as if they feel seen.

To the contracry, the music infuriates the Japanese audiences in the first-class compartment. One of them orders the cops to arrest the lady. But before they reach her, she slits her throat, much to everyone’s horror.

Solomon’s battle is half-won. He is sure that Han-Geumja will sign it, and there will be a contract. Geumja arrives with her many children. All the firm clients sit on the other side of the round table. Much to Solomon’s disappointment, Geumja is still reluctant to do the signature. She tells Solomon how her father, as one of the miners, arrived in Osaka in 1931.

Further, she tells him of how she and her mother followed. She asks whether he will force Sunja to do this if she tells him that not a nerve of her agrees to sign. Solomon immediately says, “No.”

Geumja gives him a smile and leaves with her children. The clients are disappointed, and they leave the office immediately. Mr. Tom, Solomon’s boss, shouts that they’re fucked, and they should have never trusted Solomon. Solomon leaves.

Sunja and Mozasu leave for Korea. Once they reach Busan, rains start pouring. As Solomon runs away from the office, it’s raining back in Tokyo. Solomon throws away his tie and blazer and dances to the local band, singing a Cure number in the shade. He’s dancing joyously in the rain.

Meanwhile, Sunja is delighted at witnessing the seashore she left years ago. She starts screaming with tears in her eyes. For unexpected, unanticipated, separate reasons, it’s a moment of euphoria on both sides.

The fact that it’s raining in both lands tells how connected they are geographical. Thus, the point of sheer pointlessness of colonialism of one over the other is subtly made. While this might signify the end of Solomon’s career, it’s an extraordinary moment of self-realization. The boy has finally come of age, and a simple moment of truth has taught him the value of truth. Meanwhile, Sunja is absolutely delighted to reconnect to her roots after more than fifty years since she was separated from them. The grandson and grandma have come full circle now.