Finch (2021) Apple TV+ Review: 10 years into the future, the ozone layer is completely gone, the world has become a post-apocalyptic wasteland, and the eponymous character of Finch is a robotics engineer with only a dog for company, who rides an RV, uses the laboratory of his previous workplace as a makeshift bunker. When he is not out scavenging for supplies wearing a self-designed protective suit, he is in the shelter cum lab, hard at work in creating a new AI installed robot companion, for the sole purpose of looking after his dog when Finch is gone and maybe a bit of companionship in his final days.

The fact that Finch is played by Tom Hanks almost adds to the predictability of the endeavor as Hanks is no stranger to acting against non-human co-stars, from Turner and Hooch to Castaway, and unsurprisingly he is fantastic to watch on screen, taking all the schmaltzy and sentimental nature of the film in stride and carrying it on his able shoulders.

This is a departure for director Miguel Sapochnik, who fans of Game of Thrones might recognize as the director behind the most action-packed and well-regarded episodes of the show like “The Battle of the Bastards” and “The Winds of Winter”. Finch (2021) should be a slam dunk in regards to the visual sensibility of Sapochnik as a director and it shows – the movie is gorgeous to look at when it makes an effort to focus on the landscapes and the wide gorgeous vistas.

Jo Willems’ cinematography and usage of light in showcasing the change of location as well as the intensity of said sunlight is particularly illuminating. The night-time shots as well look beautiful, with the bluish hue complementing the stormy nature of the environment as well as raising the stakes, however minuscule the stakes are.

And the stakes are minuscule because even though the story is set in a post-apocalyptic world, the plot is not really interested in world-building or in the effects of technology, or global warming, or any inciting incident that would have caused the post-apocalyptic landscape. What we have, thus, is a mish-mash of different genres like the “Man’s best friend”, “the father-son” storytelling, producing a froth of Amblin-inspired Zemeckis guided coming-of-age road movie. And that could have become a bland and arguably derivative story if not for the presence of Hanks’ folksy charm and Caleb Landry Jones’ brilliant mo-cap acting. 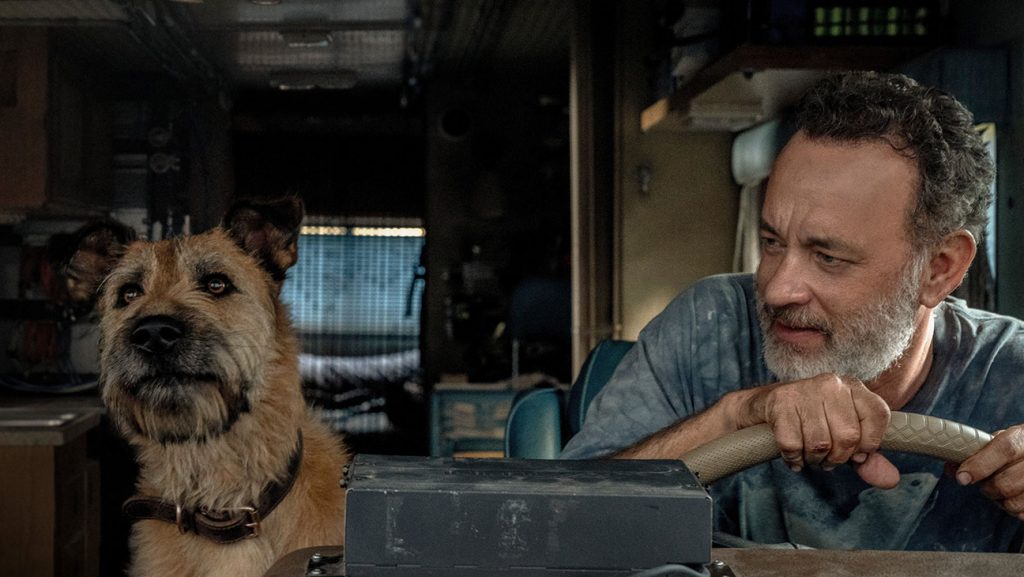 Jones who plays Jeff, the robot companion, does a brilliant motion-capture performance, even though his voice being a cross between Stephen Hawking and Borat is certainly a choice. His voice becoming more and more natural as time goes on, with his interactions with Hanks trying to traverse the full gamut of the emerging father-son dynamic, is the primary reason to watch this film.

Less interesting is Hanks explaining the propensity of humanity to give in to its darkest urges when faced with an unexplained change across the world, primarily because that plot thread has now become a trope, a tired trope at that. Secondly, the world and humanity’s dark urges of that world aren’t shown to give enough context for Hanks’ proclamation and reasoning for why he doesn’t travel at night, in spite of all the “predictable” risks involved.

Finch (2021) however rests squarely on the shoulder of Tom Hanks, whose late-career choices in movies see him playing roles of characters who are the pinnacle of professionalism, from Captain Philips to Sully. But what makes Hanks so good is him exercising his acting chops to showcase a variety of emotions with his eyes or the twitches of his face. His folksy charm and charisma prove why he is given the pseudonym of “America’s Dad” because he is brilliant in showcasing disappointment, anger as well as pride. But what Finch shows us is his depiction of fear, as well as showing Finch as a character very much skilled at adapting to circumstances but only up to a point.

The movie thus strongly mix both Hanks’ reel and real-life persona to create a character who is warm, fatherly, and yet unquestionably flawed and very human, and while the script does imply the presence of these characteristics I highly doubt those would have been at the forefront if not for Hanks’ ability as an actor.

Finch (2021) is ultimately a family-friendly story about a man and his dog and his robot companion on a road movie, and it is as sweet and predictable as you would expect. It does have pacing issues, and the script doesn’t have enough plot in it to warrant a two hours runtime, but Tom Hanks assured presence and Caleb Landry Jones’s motion capture, lends credence to the heartfelt and emotionally charged scenes in the final stretch. It is unquestionably emotionally manipulating, but it does have its heart in the right place.

Borderlands [2021] 'DIFF' Review: A Compellingly Observed Documentary about the Edges of the Country and its People