A shy groom and a self-assured bride. Characters from Meenakshi Sundareshwar are presented in the same manner. Not as a boy-meets-girl but a prospective bride-meets-prospective another half narrative. By the mere lookbooks of the film, it is clear how the lead characters are presented through the lens of being commodities in the institution of marriage. The process is to present their image to one another to better understand each other’s personalities, albeit, by a single interaction. There is a shift from traditional meet-and-greets in how lying about their honest selves has changed to being more truthful about their characteristics. Meenakshi and Sundareshwar also do the same. And when they introduce themselves to one another, they introduce themselves to us.

This particular ritual of the meet has long appeared in the traditional meet-and-greet in the Indian ways of arranged marriages. Here, meeting along with parents and a meeting separately later has its individual dynamics. One chooses to show and hide, especially the bride in this equation – who is supposed to put upon a shy and polite personality in order to appeal to the parental side of the man-child that comes to see her. Meenakshi’s inquisition while peeping out from a door into the main hall explains away the same hide-and-seek by that small gesture. This was something that reminded me of Revathi’s character from Mouna Ragam. Like the old classic, Meenakshi’s inquisition is not necessarily because of a fear due to shyness but to hide her outwardness, to mask off her self-assured self for the time being – to elude the other party into accepting the proposal. The effort is to not appear rude due to mere confidence.

However, this facade is quickly cut in the Netflix film, where we catch Meenakshi coming out with irreverence to such customs – and that is not shushed up by the elders of her family while pleasing the dude on the other side instead of detracting him. With this interaction, the film enters the realm of a goofball engineer guy-meets-a confident BBA graduate narrative on their journey to make up for one another’s goof-ups and downsides. The idea of completeness in love – or more precisely completing one another – is presented yet another time by these creators. The slight difference is how Sundar and Meenakshi choose to do it after their marriage and not before, how their resolution is not to reach a certain commemoration of relation but to find comfort as being one another’s lifelong companions – to map out their compatibility after marriage. 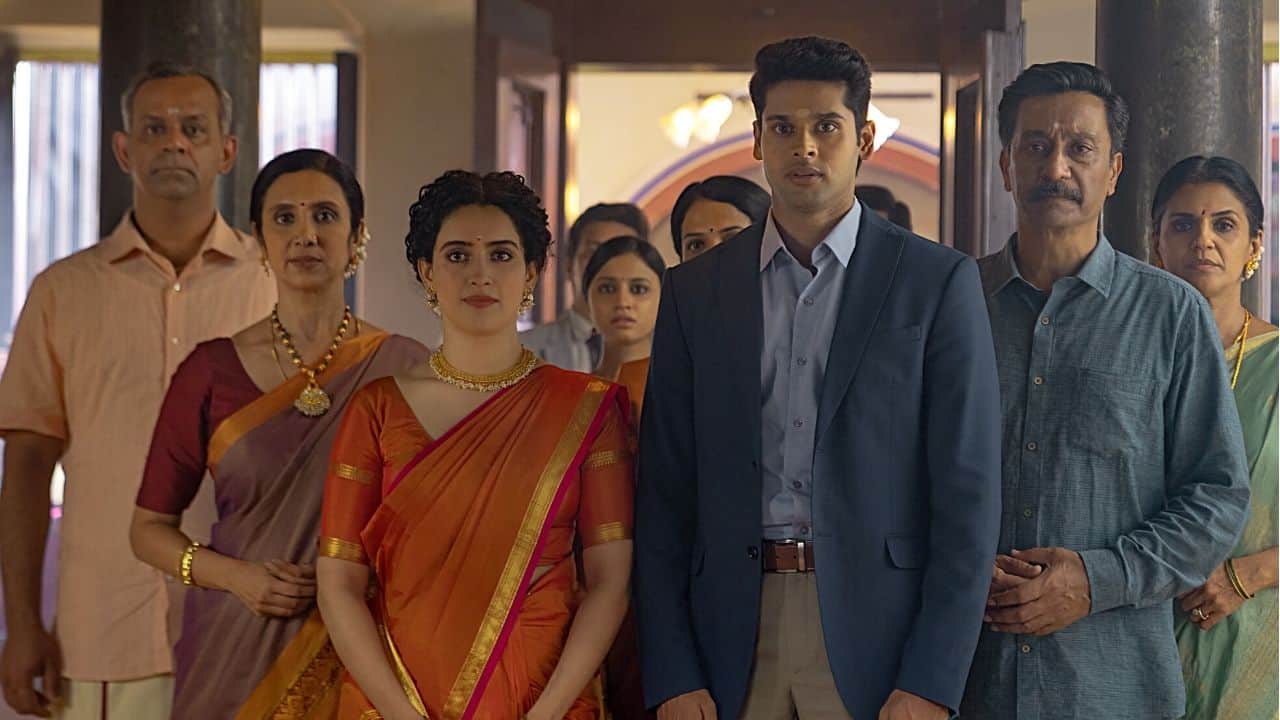 The further process for these two lovebirds is to make their relationship work, for which there is hardly any resistance from their families. The caricaturish characters from their families are not shown to be born just to make their lives more difficult. So they’re not the torch-bearers of conflict in their lives. With this ease in the inter-character dynamics, the screenplay gravitates more towards the quirks and gags to fill the entire narrative with sweetness. Don’t mind me saying this to be the same sweetness that attracted me and many alike to click on the title when it arrived on the streaming platform! There were hardly any ‘good’ romantic comedies made in so long that Meenakshi Sundareshwar seemed to be the one that would break that barrier.

And there were many reasons why that seemed like the case. From the time the trailer was launched, the film was marketed in the same manner. There were relatable bits of the couple’s long-distance relationship, which was something that many couples had to resort to during the pandemic. Sanya Malhotra was presented as a lead owing to a shift in such tradition-seeking male-centric narratives. Apart from her charisma, comical elements and musical compositions were an obvious attractions to the Netflix release. And the Indian fascination with showcasing weddings in movies was also presented as an elaborate attempt to gather the crowds of both traditional and modern-approach seekers for their social media handles.

The film stays true to the treatment-based elements from the aforementioned promises. It fills one’s heart with an affectionate sweetness longing for the love from familial bonds. And there is a clear divider for this film separating it from the average Bollywood fare – Justin Prabhakaran’s melodious music. It feels like a breath of fresh air from the mainstream noisy affair with remakes and redundancy. It fits in the narration like a charm & elevates the elements of comedy & romance from the writing. 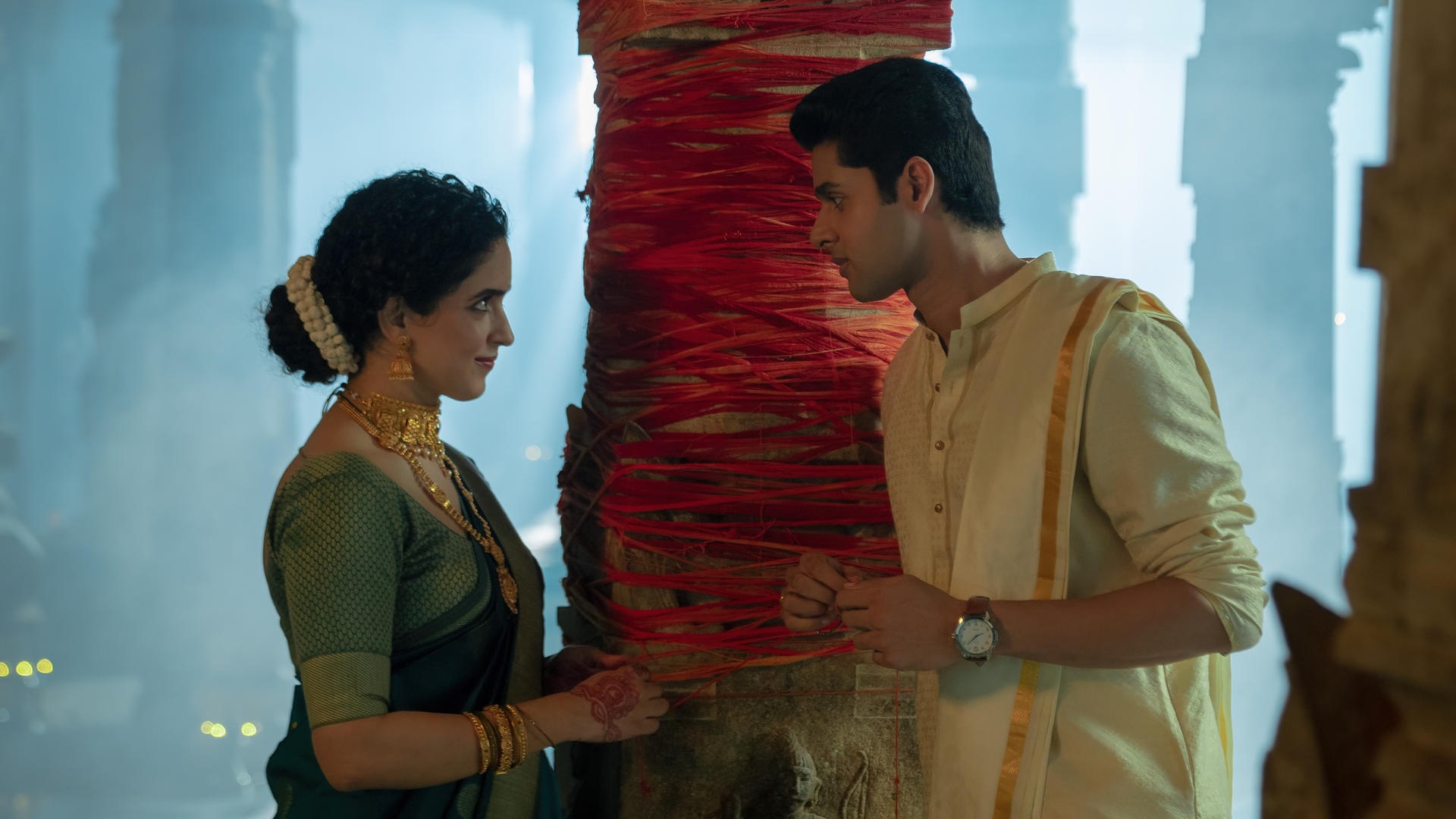 However, the same music overshadows the limitations from the script which is then used to just mask off the clichés and the lack of insights from the writing. The treatment-oriented approach focuses on the sweetness to carefully detract us from the under-cooked sides with its character arcs. While Justin’s music continues to be melodious throughout the film, the filmmaker uses it merely like a cheat code after a point. The emotional build-up depends more on these experiential elements and the magic of characters starts wearing off.

The elements of how distance impacts their relationship are often clichés and no more thought is given to developing them beyond. The dynamic between his mechanical functioning as opposed to her thought-out approach of looking at life is underdeveloped to make one sense the emotional stakes of their eventual patch-up. While the existence of clichés could have been forgiven with a detailed look into their bond, the film resorts to an easy way out and makes it hard to do so. While Sanya’s performance makes us believe in the stakes along with the miraculously good supporting cast, it isn’t a solution to the film’s obvious shortcomings.