The film welcomes us into the autumn season. Trees are shrouded in the foliage of red and yellow leaves, and the town of Lakewood looks like a quaint place to enjoy the typical cottagecore fall vibe from. Only, it isn’t. Directed by Phillip Noyce, The Desperate Hour (which was previously supposed to be titled Lakewood) draws us into an unexpected situation – a shooting at school. The Netflix 2D short, If Anything Happens I Love You (2020), broached a platform for parents in the USA to talk about their feelings concerning the rampant prevalence of mass shootings in schools. But the pandemic shut down schools for a period long enough for the conversation to die down. Today, schools are starting to reopen again, and this film tries its level best to bring us at close quarters with the anxiety and helplessness of a parent in such a scenario. Unfortunately, it is both a hit and a miss.

Amy Carr is a recently widowed mother of two children who wakes up in the morning, sends her young daughter to school, and goes out for her morning jog. It is just another day in her life when she is dabbling between numerous phone calls and her own routine when she is informed about a shooting that broke out at her son’s school. She quickly comes to realise that her son, whom we see being coaxed by his mother to get out of bed, had actually left for school. Soon, Amy is running across the woods to the other part of the town to rescue her son. Is she successful? Perhaps, by its end, the movie oversteps its scope and turns into melodrama quickly. The ‘obviously’s in the script weigh it down. For example, we see it coming from a mile away that while she is running through the woods, she will be bound to fall and injure her ankle, and so she does. The plot, then, keeps the film from its promise to deliver a thriller.

Naomi Watts, whose performance in Penguin Bloom (2021) had moved me, is also the beating pulse in this film. She brings to life the torment of a mother in crisis, the fear of losing her child etched out on her face. Her best moments are when she tries to keep herself from becoming a nervous jelly while struggling to reach her son’s school. However, the writing doesn’t match up to her performance. The nuance in her character is heavily missing; to be fair, it is unfair to burden a central character so full of possibility with a unidirectional trauma driving her – the fear of losing a loved one, especially in light of her recent personal tragedy. 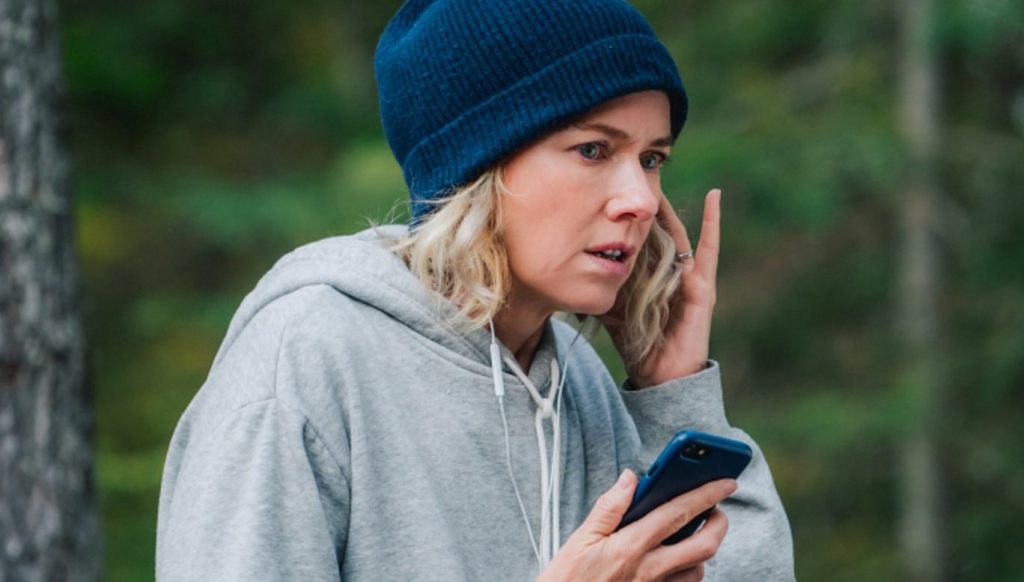 I also think the film could have really shone out if it successfully helped recreate the feeling of claustrophobia in Amy among the audience while presenting to us these panoramic shots of nature. It could have drawn a fine line between the feeling of confinement in an open space. Unfortunately, it doesn’t. From time to time, the shots capture the vastness of the forest and the open space with background music so less unnerving that if I did not have any context about the taut situation, I’d have thought it was a contributor to Amy’s efforts at practising mindful meditation to calm her down while on the jog.

For the first half of the film, the camera is never at rest. It is all with good intention. In the process, however, it becomes a marathon, and I don’t know if I am having enough time to observe and understand the character. By the end of the second half, you are both used to the camera’s tropes and the unending running. It intrigued me no less, as a resident from the Global South, that someone should have impeccable wireless internet connection even in the most remote parts of a forest. More interestingly, how far has she jogged in so little time that it takes her an entire span of a film to reach her son’s school? It is a question for which no reasonable answer exists.

The film ripples into mediocrity very soon. By the end of it, it is nothing remarkable that’ll etch an impression. If you remember watching the 2021 thriller, The Guilty, starring Jake Gyllenhaal, you will understand that this film preaches the same kind of misfit visual storytelling that ultimately bogs it down. It was a film that earned its credits purely due to Gyllenhall’s performance. Interestingly, both The Guilty and The Desperate Hour – have been part of the TIFF’s screening list. However, The Desperate Hour leaves you feeling guilty for having spent so much time and effort on it. What’s worse, it thinks that it is making a statement about gun violence only to realise that it really isn’t. It is a hit-and-miss like no other film in my recent experience.