Over the years, many actors have played fictionalized versions of themselves. Some of the most popular examples (that aren’t just cameos) are John Malkovich in Being John Malkovich (1999), Joaquin Phoenix in I’m Still Here (2010), Jerry Seinfeld in Seinfeld (1989-1998), Larry David in Curb Your Enthusiasm (2000-ongoing), and many more. But it always gets interesting when actors do the same to not just give a hint of the game of deception they play in real life, but also comment on the industry they work in. Uttam Kumar did it in Nayak (1966), Shah Rukh Khan did it in Fan (2016), Anurag Kashyap and Anil Kapoor did it in AK vs AK (2020), and Kevin Hart did it in True Story (2021). So, amongst many other things, it is exciting to see Madhuri Dixit Nene pull off a similar feat in such a male-dominated sub-genre with The Fame Game (2022), currently streaming on Netflix.

Showrunners Sri Rao, Karishma Kohli, and Bejoy Nambiar follow the reel and real-life of superstar Anamika/Vijju (Madhuri Dixit Nene) as she attempts to make her comeback. She lives with her husband Nikhil (Sanjay Kapoor), son Avi (Lakshvir Saran), daughter Amu (Muskkaan Jaferi), her mother (Suhasini Mulay), and their caretaker of sorts (Shubhangi Latkar). When it looks like things are not going to work out with Anamika’s current co-star, Nikhil decides to rope in Anamika’s most popular co-star and alleged ex-flame Manish (Manav Kaul) to salvage the film. From that point onward, things begin to spiral as Anamika’s feelings for Manish begin to grow again and she is torn between choosing her fame, her family, and her love life. This whole situation is worsened by Anamika’s disappearance. And that’s when the tough-as-nails police officer Shobha Trivedi (Rajshri Deshpande) is called upon to investigate the matter. 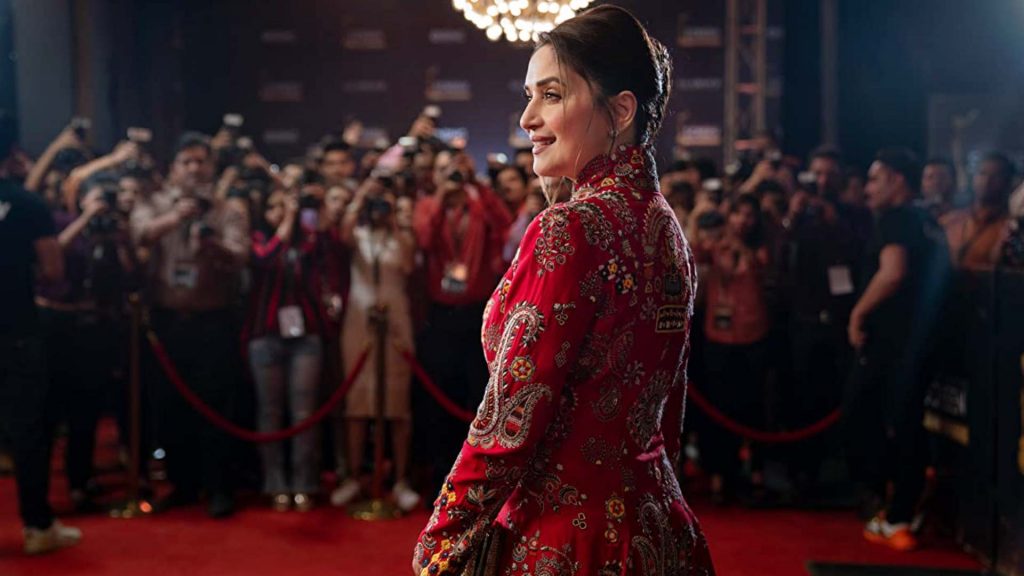 As you can see, the script is punching in a lot of different directions. Anamika’s story itself is multi-layered. She exemplifies the kind of success that’s achieved through sheer grit and determination. But there’s a dark side to it because she’s not actually Anamika, or at least that’s not her actual name. She has lived a life as Vijju and hints of it is seen through her good-cop-bad-cop dynamic with her mother and her caretaker. Her relationship with her husband, her son, her daughter, and even her make-up artist Billy (Kashyap Shangari) shows a specific kind of fragility that comes with fame. Her relationship with Manish illustrates a life that she apologetically yearns for. Her interactions with a crazed fan called Madhav (Gagan Arora) show the lasting impact of her work as an actor and thereby comment on the warped connection that stars and the audience share that’s unique to India. And all that’s fine and dandy until the spotlight shifts towards the supporting cast and the crime-thriller aspect of The Fame Game.

A lot of movies and shows suffer from not having enough material in them. Therefore, the writing comes off as flaky and the episodes seem stretched. The problem with The Fame Game is that there’s almost too much material in it but there’s not enough room to breathe. Anamika herself is such a nuanced and complex character that she needed some simplicity around her. However, for better or for worse, everyone around Anamika is equally complex. Avi and Amu essay two different kinds of issues that emerge due to living under constant scrutiny and privilege. You can say that there’s an attempt to make you empathize with star kids. Since it’s a Dharma production (which is quite synonymous with nepotism), it won’t come as a surprise if we find out that it’s done deliberately to whitewash the images of real-life nepotism babies. Now, how that impacts your viewing experience is up to you. But the fact that the subplot adds topics like mental health and gender identity on top of Anamika’s already twisted arc cannot be ignored.

Related to The Fame Game – Inventing Anna (2022) Netflix Review: ‘Dangerously Close’ To Being Discarded As A Rudimentary Soap Opera

Then there’s the case of Nikhil and his abuse. There’s Manish and his alcoholism. There’s Anamika’s mother and her eagerness to be the commanding voice of the household. There’s Shobha, the investigation, and her family-related issues. In addition to all that, there’s an attempt to pull back the curtain on the inner workings of Bollywood or the Hindi Film Industry. It’s a lot. Is it unrealistic? No, not at all. Realistically speaking, all of these elements do happen in tandem. But when put to script and screen, certain elements need to be prioritized from a storytelling perspective. And that’ll automatically clean up the visual storytelling as well, something that can’t be said about The Fame Game. At the cost of repeating myself, individual scenes and moments work, especially everything featuring Anamika. Nikhil and Anamika’s scenes are visceral. Avi and Amu’s bits are heartbreaking and annoying at times. However, the bridges between all these components and the act of searching for Anamika aren’t solid, and that makes the whole product tonally inconsistent.

The production design and costume design is packed with detail. The gigantic portrait in Anamika’s house showing only half of her face, the title sequence being a hand-painted picture of Madhuri, and a subplot about hand-painted posters say a lot about how much we know about stars and how much is carefully constructed to look a certain way. The central song of The Fame Game, ‘Dupatta’ seems like a swipe at Bollywood songs like ‘Dupatta Beimaan Re’ and ‘Dupatta Mera’. The dupatta is “traditionally” associated with a woman’s dignity and songs often use the piece of clothing to insinuate a variety of things, most of which are sexual in nature. And those are the two things (among many others) that Anamika grapples with throughout the course of the show: maintaining her and her family’s dignity and countering objectification. So, yes, in that sense as well, The Fame Game is packed with symbolism, motifs, Bollywood-based details, and parallels with Madhuri Dixit Nene’s off-screen and on-screen stories.

The best aspect of The Fame Game though is undoubtedly the acting. It’s a slam-dunk from Madhuri Dixit Nene. She effectively blurs the line between Anamika the star and Madhuri the star by imbuing her with every quality that she’s (Madhuri, the person) known for while keeping her alien enough to help you separate the art from the artist. Manav Kaul and Sanjay Kapoor feel like they’re playing two sides of the same coin. There’s an inadvertent nod to Gone Girl (2014) where Kaul tells Kapoor to not smile too much during a press conference because his wife is missing. And despite being a fleeting moment, it’s played so well that it’s worth rewinding and watching again. Rajshri Deshpande is a major highlight, bringing a no-nonsense attitude to the pretentious world of entertainment. And the matter-of-factual portrayal of her marriage with Sheila (Anindita Bose) is worth mentioning. Saran, Jaferi, and Arora get their moments to shine and they milk the hell out of it. Veteran actors Mulay and Latkar prove yet again why they’re so dependable. Shangari’s chemistry with Madhuri seems very natural. All in all, it’s a big win for casting directors Karan Mally and Nandini Shrikent.

In conclusion, The Fame Game fares quite decently in this subgenre which is home to meta commentaries on the entertainment industry and the facade of a star. Which in this case are Bollywood and Madhuri Dixit Nene, respectively. As mentioned before, the subgenre is dominated by men. So, a female-driven perspective seems fresh and at times, enlightening. It’s brimming with brilliant performances, moody cinematography, and a myriad of themes that often go unaddressed under the harsh light of fame. But when said themes begin to overlap and the focus begins to shift towards the crime-thriller aspect of the show, it comes off as stuffy and shaky. The Fame Game could’ve definitely benefited from a few more episodes and some re-writes to spread the material across said episodes. That would’ve given every single character their time in the sun and made the investigation a slow burner rather than a forgettable one. However, since that’s not possible now, give the show a watch if you’re a Madhuri Dixit Nene fan and if you’re willing to spend a bunch of hours on an otherwise predictable narrative.

The Fame Game is now streaming on Netflix