Slow Horses, Season 1, Episodes 1,2: Recap & Ending Explained –  The Mick Herron-written series of books dealing with a team of misfits and outcast MI5 agents stranded together in a dingy ramshackle apartment in London, titled “Slough House,” finally gets adapted to a streaming show. With an episodic count of 6, each running over 45 minutes, Slow Horses feels like a homage to John Le Carre spy novels, which are more focused on the bleakness and mundanity of the lives of spies. In short, the inverse of the James Bond mode of storytelling.

The tense, action-packed opening sequence introduces us to our youthful protagonist, River Cartwright (Jack Lowden). He is tracking down a suspected terrorist at a busy airport terminal. Due to a communication goof-up, where the aesthetic details of the suspect get mixed up, Cartwright manages to capture the wrong man before he embarks on his plane.

Instructed to stand down by his superior, Diana Taverner (Kristin Scott Thomas), he nonetheless hears that the actual suspect has entered the airport and rushes through to apprehend the suspect without missing a beat. What follows is a thrilling chase through the length and breadth of the airport where Cartwright is the lone agent chasing the suspect while MI5 agents, codenamed “Dogs,” are inbound or unavailable in the nearest vicinity. However, all of his efforts are for nought as Cartwright is unable to stop the suspect from detonating the bomb attached to his vest.

The tense opening sequence is a misdirection, as the show pivots itself to the tense espionage drama tinged with workplace comedy vibes it wants to be. The residents of Slough House are introduced by Catherine Standish (Saskia Reeves) opening the door to the apartment situated in drizzling London. She is first met by her irascible boss and the head of Slough House, the notorious Jackson Lamb (Gary Oldman), who is particularly cynical and has a bone to pick with River Cartwright, the newest recruit to Slough House. 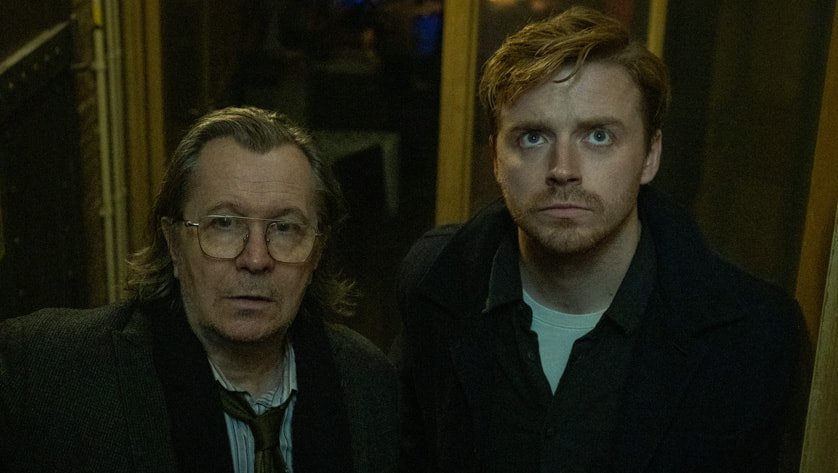 Cartwright, we see, has been shuffled off to Slough House after the goof-up of the airport incident, which is later revealed as a training exercise, but his mistakes were attributed serious enough for him to be ostracised from MI5. And, as Lamb has revealed, Slough House is “purgatory” for misfit agents who have made the biggest of “goof-ups.”Lamb’s conversations with Cartwright also reveal River’s connections within MI5, and his grandfather’s pull as an ex-agent, such that River could be shuffled off on punishment duty for six months at Slough House instead of being off the service altogether.

It’s Gary Oldman’s Jackson Lamb who is easily the show-stealer. Lamb is far too liberal with his swears, at times creatively so, similar to his character George Smiley in “Tinker Tailor Soldier Spy.”He is also very content with living in absolute squalor, dumping the files on his desk into the garbage, having takeaway cartons strewn around him, and having holes in his socks. Author Mick Heron’s description of Lamb as “Timothy Spall went to seed”, might not have been accurately cast, but it certainly comes close to the vision of the author with Oldman’s performance.

Cartwright is found paired up with Sid Baker (Olivia Cooke), arguably the most efficient of the agents in Slough House. We see Sid following a suspect and extracting information from the suspect’s laptop, while Cartwright manages to rummage through the suspect’s bins in the hopes of finding a clue. The fact that Slough House is running ops to investigate a far-right journalist piques Cartwright’s interest. Couple that with his meddling nature, and as is established within these two episodes, and increasing self-confidence bordering on cockiness, Cartwright manages to follow Hobden, the far-right journalist, throughout the second episode and invariably pulls the inhabitants of Slough House into the machinations of the still to be revealed labyrinthine plot.

The inciting incident occurs when hooded crooks capture a seemingly insignificant student from a standup comedy function. The hooded crooks are led by an ex-army man who has kidnapped, tied up, and gagged the victim in their basement, threatening to behead him within a day. The cause of the racially charged crime is the hostility surrounding the Afghan War.

The group, named the Sons of Albion, has kidnapped Birmingham-born Hassan Ahmed, an ordinary British-born Muslim student. These are the only relevant bits of information extracted by MI5. Or at least that’s what it looks like on the surface because Diana Taverner has much more relevant information regarding Ahmed’s identity. Diana later meets with Mr. Moody, one of the Slow Horses of Slough House, who is acting as a mole to get information about Sid and Lamb’s operation from Slough House. He had planted a bug in Lamb’s office because of grievances against Lamb’s inability to utilize Moody’s talents as an ex-Dog. Diana takes advantage of Moody’s anger by instructing him to do some off-the-books work and emphatically instructing him to remove the bug from Lamb’s office.

Cartwright, Hobden, and the journalist angle:

Cartwright’s meddling and curious nature prompt him to enlist the help of another of Slough House’s “inmates,” Roddy. Roddy is a cyber sleuth and ex-agent of MI5 who has been shuffled off to Slough House because he once put an innocent man’s name on the sex-offenders list because “he had nicked his seat on the bus.” However, Roddy doesn’t know the reason himself, and this piece of information is gleaned by Cartwright due to his grandfather’s connections within MI5. 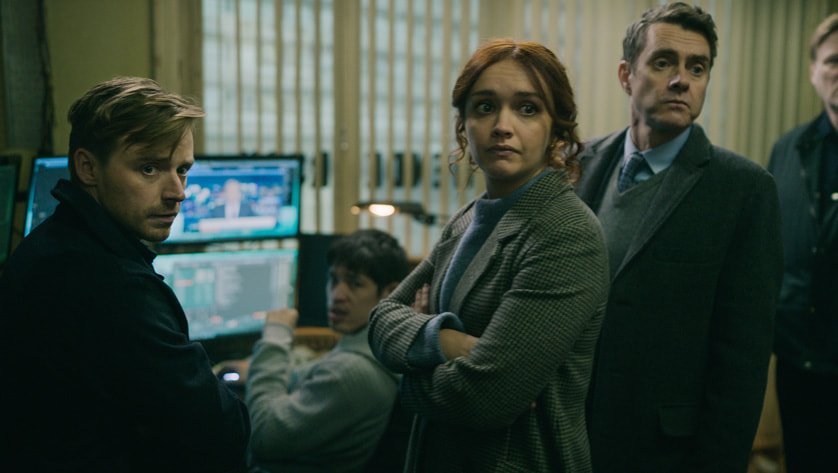 Cartwright uses this information as the carrot to persuade Roddy to help him parse through the information off Hobden’s laptop, which Cartwright had acquired before while transporting it from Slough House to MI5. But it comes up short because the drive was a distraction and Hobden’s having no online presence meant Roddy had reached a dead end. This ensured vigorous stalking of Hobden by Cartwright via the streets of London, leading to a stakeout outside Hobden’s home, where Cartwright is soon joined by Sid at the car that is waiting outside Hobden’s home.

Sid and Cartwright’s relationship evolves from combative to flirtatious, with a healthy dose of droll British humour accompanying the competitive streak. However, Cartwright’s suspicion as to why Sid is in Slough House is also accompanied by Sid’s continuously being called by her Aunt Zidane. Except there is no Aunt Zidane, and Sid isn’t one of the goof-up agents of MI5. On the contrary, she is tasked by Diana to keep an eye out on Cartwright, a fact which is both a shock to Cartwright as well as the audience as it significantly raises questions about Cartwright’s importance in the overall narrative.

The plot thickens when Cartwright and Sid see one of the Sons of Albion sneaking into Hobden’s house. As the two manage to enter, they see Hobden in a chokehold at gunpoint, while his laptop already has a thermite pot on top of it ready to blow. Cartwright expected this as he had been privy to this crude methodology of destroying hard drives by Roddy, and he had also found residues of iron oxide in Hobden’s bins, one of the constituents of thermite. The explosive goes off, and in the distraction, the man tries to escape. He charges past Cartwright and, in a scuffle with Sid, shoots her, leaving the place an inferno, with Cartwright cradling Sid’s neck to stop the blood flow and calling emergency services.

The show is operating on misdirection. While there are action sequences to get the blood pumping, for the most part, this is a show dedicated to exploring the mundanities of an agent’s life. By focusing on the lives of these ostracised agents, there is already a residual feeling of these characters being the underdogs in the larger narrative, and underdogs are always easy to follow.

It also helps that the characters are interesting for the most part, even if the workplace comedic bits don’t gel with the serious espionage proceedings. However, the dry British humor and the solid performances, led admirably and effortlessly by Gary Oldman, serve to offset some of the flaws in the narrative of the show. The show’s treatment of its racially charged politics is a bit lighter than you would expect from its source material, but the show’s treatment of an espionage story ensures that Slow Horses is a unique spy thriller in the vein of “Three Days of the Condor” or “The Spy Who Came In From The Cold”. Here’s hoping it sticks the landing.