Moonshot (2022) Movie Ending Explained & Themes Analysed: ‘Moonshot’ requires a deliberate suspension of any sense of wonder and uniqueness when stepping into the film. While that is inherently antithetical to the film genre, which mixes science fiction with romance, that is the only way to enjoy its largely par-for-the-course plotting and characterization. If that is taken care of, it can be appreciated as a fairly simple rom-com with a few fun moments and having a cat as a character, with an essential role in its proceedings. Starring Cole Sprouse, Lana Condor, Zach Braff, Emily Rudd, and Mason Gooding, it is available to stream on HBO Max.

‘Moonshot’ is set in 2049, when human beings have colonized Mars and are on the way to terraform it, and robots, looking like they’re from the 1980s, have taken over supervisory jobs. Interestingly, amid such radical changes in human society, the interface of texting apps is exactly the same as today. Walt (Cole Sprouse) works as an assistant barista on a college campus, whose only friend is his superior, Gary, who happens to be a robot. He is consumed by his dream of escaping his humdrum existence and set off for Mars and, to that extent, has applied to the Kovi Industries Student Mars Program 37 times and been rejected just as many times, primarily because he neither has any talent nor acumen that can contribute to the planet’s development. Sophie, an extremely intelligent and solemn young girl, awaits her boyfriend’s return, a man who ticks every box she cares about and at present is on Mars under the same program that Walt has applied for a gazillion times.

It just so happens that on the same night that Walt has a ‘Before Sunrise‘ encounter with Ginny, who is leaving for Mars, Sophie finds out that her boyfriend, Calvin, has converted his program into a job that indefinitely postpones their reunitement. 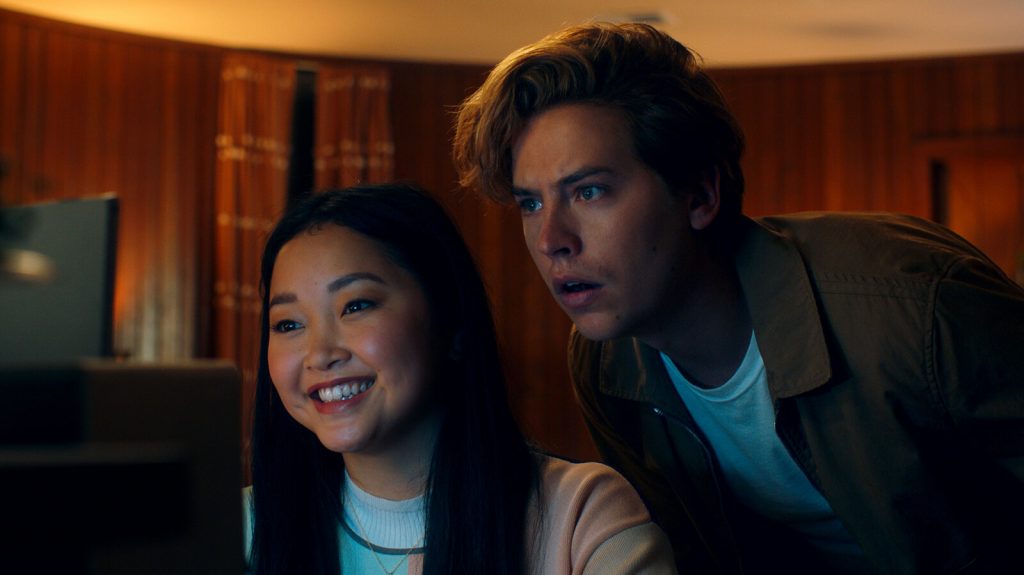 Orphaned at a young age and taken in by Calvin’s family, Sophie realizes that everyone she cares about is on Mars and decides to risk her aerophobia by booking a commercial ticket to Mars (whose discounted price is $937,000 only). Calvin, taking inspiration from a cat named Ripley, who illegally boarded Ginny’s space shuttle, decides to do the same with Sophie to reunite with Ginny and realize his ultimate dream of setting off on an adventure.

The trip goes conveniently well, throughout which Sophie and Walt form a deep bond and start to recognize their attraction towards each other till, at the end of it, she decides to stop helping him as she sees the utter stupidity and selfishness of Walt’s motives, causing him to get incarcerated, which though, isn’t nearly as dark as one might imagine. He finds out then that Ginny has a new boyfriend, and obviously so, given the brevity of their romance, while Sophie finds her new life as being nowhere close to the dreamy existence she thought it’d be.

Humanity in a world of machines:

The film begins with a webcam recording of Walt as he applies for the Mars Student Programme, where we instantly find out how lacking he is in anything that would facilitate his case. Yet he seems to possess a childlike desire to leave for Mars because he sees it, not through an expediently scientific lens, but with a sense of wonder and excitement, at the possibilities that this new frontier of humanity holds. This is a recurring theme throughout the film wherein Walt’s character, being the bumbling simpleton that he is amongst a hoard of geniuses, makes him stand out because he is not mechanical.

Aboard the spaceship, where he pretends to be Sophie’s boyfriend, Calvin, who is a wunderkind, he is asked to present Calvin’s thesis. Dumbfounded and clueless, it’s a classic rom-com moment where a fish-out-of-water character, on being put on the spot, escapes his predicament by speaking about something completely unrelated and, in this case, unscientific.

Yet it’s a fortuitous scenario as his speech moves one-half of this lesbian couple onboard, who had seemingly been putting off their engagement indefinitely until that point, and even plants the seeds of doubt in Sophie about the purpose of this odyssey of hers. At the end of the film, when he gives Sophie a gift, the heartfelt and straightforward nature of the letter moves her and makes her reconsider her choices that involve a life of soulless subordination to her boyfriend. Walt’s idol Leon Kovi (Zach Braff), a founder of the eponymous company, is a man who always introduces himself as a ‘self-made billionaire.’ This is made all the more comical because these introductions are constantly repeated through public announcement systems all over his company’s spaces. When they meet for the first time, in a satirical moment, Leon tells Walt about how despite having the ability to end world hunger, he chose to travel to Mars to provide the next generation with the opportunity to solve that crisis. ‘Moonshot,’ quite consciously, takes place in a world where all characters are driven by calculated purpose in a system that rewards it. Leon keeps emphasizing how it is Walt’s utter ordinariness that makes his journey all the more, a comment whose condescension intensifies with each repetition of said ordinariness. Part of Sophie’s ‘impossible checklist’ for a boyfriend includes the fact that he has the potential to be a good earner.

This is precisely why Walt’s aimlessness stands out more. It’s a world structured around capitalistic purposes, and Walt does not have any. Walt’s desire to go to Mars, which has an ancient quality about it because it is born out of plain human curiosity, is constantly overlooked by Kovi Industries in favor of only students who add a purpose to their existence on Mars and its progress as a human colony. Walt is shown how his every move to board the spaceship was recorded, yet he will be allowed to live on Mars because he serves a specific financial purpose for Kovi Industries, having turned into a social media trend and hence a leverage gear for Kovi against the board.

When Walt and Sophie have a fight, he tells her that the only reason she believes she belongs on Mars is that she can afford it, and this reinforces the nature of how the wonder of deep space travel has been reduced to amusement for the terribly rich. This thematic absurdity reaches its height when it is revealed that the cat that boarded Ginny’s flight is under trial for its’ crimes against the company’. Or one might find the very colonization of an entire planet by a single private corporation to be the height of extreme capitalism.

The final act of ‘Moonshot,’ if nothing else, brings out its lack of originality in the most visible fashion. The entire film, up until that point, never feels like it needed to have a sci-fi angle anyway, but this act, such a blatant re-enactment of every rom-com to have ever existed, brings out the fact that the angle is little more than a shield for its inability to fit tightly within its primary genre, that of a romantic comedy, on the merits of its script and characters. 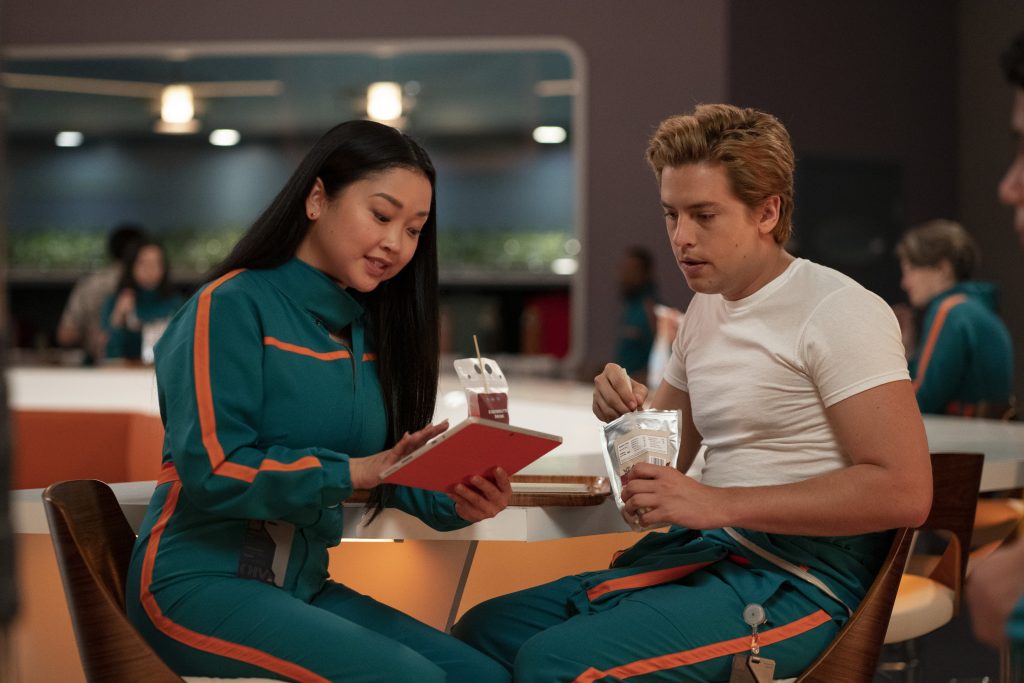 On being asked to join Calvin’s team as a ‘perfect fit,’ Sophie realizes how Walt had been right all along about him not reciprocating her feelings in the slightest. She gets confirmation from Calvin’s mother, her own foster mother, that they will always view her as family no matter what she does. This strengthens her faith in herself and makes her leave Mars to return to Earth and pursue her own career, an agency also provided by the gift she gets from Walt with a checklist as a letter that is seemingly a lot more doable than her previous one, as well as a toy that he had given her when their trip was about to begin.

Walt, finding his existence on Mars to be a tedious bore and hardly distinguishable from his life on Earth, is asked to go to Ceres, a dwarf planet, and inaugurate the outpost set up by Kovi Industries. He calls Sophie to inform her about this but is told she’s leaving for Earth. Instead of meeting at the airport, Walt finds a way onto the spaceship carrying only Sophie back to Earth. He essentially gives up on his explorer’s spirit and decides to return to Earth to be with her, confessing his love for her in these final moments that make Sophie tear up. Having both had their taste of Mars and realizing that it doesn’t fit their palate, they return to their home base as Sophie’s words about Earth being their ‘only spaceship’ ring genuine.