The latest Netflix drama ‘Inventing Anna’ is a muddled crime soap opera that comes ‘dangerously close’ to being discarded as flimsy and yet remains a compulsive watch. Inspired by true events, Shondaland limited series fails to do justice to the sensational infamous exposé of the German con artist Anna Sorokina in New York 2018. Worse, it looks like a polished cross-over of Gossip Girl and Sex in the City combined with Ted Bundy Tapes, except it’s devoid of any idiosyncratic character of its own, especially since the premise is largely borrowed.

“This story is completely true,
Except for the parts that are made up.”

Each ‘Inventing Anna’ episode starts with this disclaimer which, as a matter of fact, brings us to the real-life incident. Anna Sorokina is a Russian-born German citizen who made her way into New York in 2013. Following a brief stint at Purple, she became a ‘socialite’ overnight. Soon, she made her way amongst New York’s elite and crème de la crème, and eventually bamboozled them for hundreds of thousands of dollars. Pretending to be an obnoxiously rich German heiress, she claimed she wanted to secure money for building ADF (The Anna Delvey Foundation), which was supposed to be an exclusive center of arts, social clubs, hotels rooms, and gallery space, for the posh and high-class. But before she could secure the amount from the banks, her lies and fraudulent acts caught up with her which led to her arrest in 2017.

Based on the same story, ‘Inventing Anna’ opens in a courtroom sequence, in the year 2017, where Anna Sorokin alias Anna Delvey is being indicted for more than a few counts of larceny and theft of services. Soon after, Manhattan Magazine’s writer Vivian Kent picks up this story, despite senior management troubles and hiccups. She first sees Anna in Rikers Island prison where Anna is being held and convinces her to tell her story in exchange for fame that Anna has always been after. 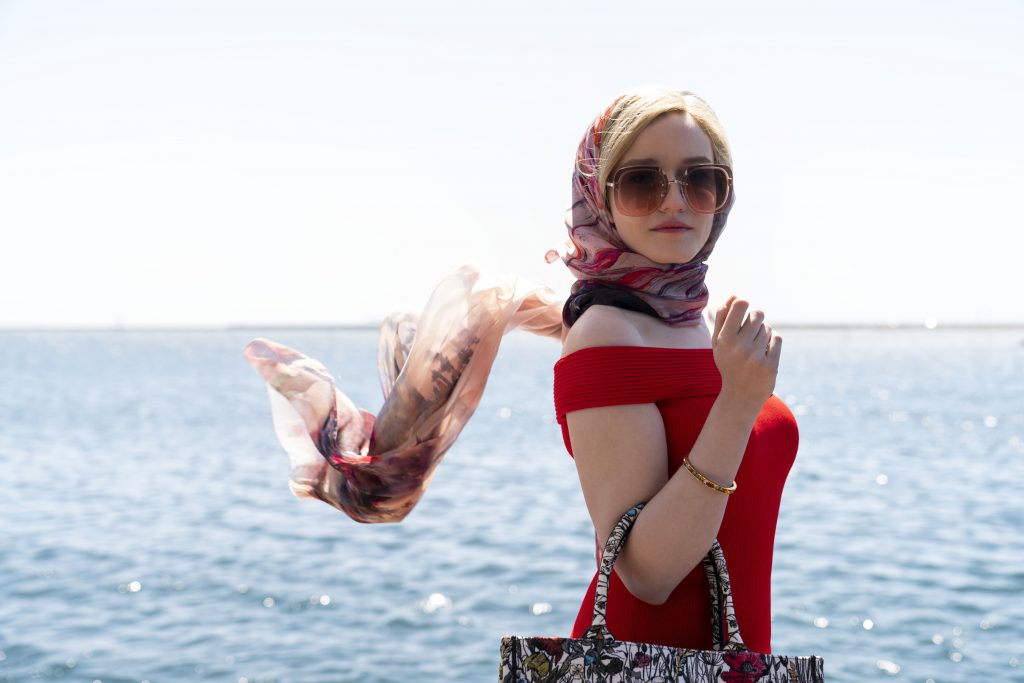 In the months that follow, Vivian’s story makes slow but steady progress; she meets Anna’s friends, associates, work partners, and fellow socialites, who gave their accounts for or against Anna. What follows is a bit-by-bit character revelation of Anna and how she could actually hoodwink some of the most astute and shrewd business people of New York. Anna was accused with ten counts of first, the second, and third-degree of larceny which included- attempt to steal property from City National Bank exceeding $1 million dollars, stolen property from City National bank exceeding $50,000, stolen property from Rachel Williams (who eventually turned her in) exceeding $50,000 and more.

The real ‘Anna Sorokina’ news story is just a premise for ‘Inventing Anna’ which unfortunately fails to create stickiness in the narrative. On closer inspection, it lets down Anna as the protagonist in an attempt to heroize Vivian’s character, which took away a lot from the series. Even after copious efforts, Vivian remained a dodgy journalist who was more concerned with redeeming her career for a past accident, and less concerned with actually writing a probing and engrossing story.

Related to Inventing Anna: The Curious Case of the Best Actress Oscar

Besides, despite documenting the juicy lives of the rich and famous of New York’s affluent, the show did not succeed in tugging the right strings when it came to narrative and plot building. As most viewers are already aware of the arc of Anna’s story, the minimum expectation from the series was to bring some revelation and characterize the complexities of Anna’s mind which could enable such an applaudable (dare I say) fraud. Every single time, the build-up felt too strong for the revelation that always fell flat. Not going into details, some examples could be, Crash confronting Anna, or Vivian meeting Anna’s family.

In addition, the lack of lucidity and expression could also be credited to the multiple lenses that the filmmakers tried to tell their tale. Come to think of it, Anna is never the one who really actually told her story; it was always Vivian who weaved it together and later published it for the world. The account first began to be told through Val, then through Kacy, then through Neff (not in that particular order), and then finally, it was left dangling to the mercy of the filmmakers. So when Rachel refused to share any personal classified account, the story started being told through the lens of the filmmakers which shifted and altered the storytelling arc of the drama. It almost felt intrusive when we see the filmmakers telling us Rachel’s account. As a viewer, I for one wanted to hear that from Rachel. That being said, ‘Inventing Anna’ is not completely devoid of good elements. We also feel that the Netflix short series should also be seen as an independent work of cinema, aside from the real-life incident that it is being built on. Just like Vivian said, ‘There is more to the story that people are not seeing’, and maybe those are the elements that need to be talked about. For one, the power of social media, and how just a single online platform is sufficient in enabling a fraud worth millions. ‘Inventing Anna’ focuses on that aspect time and again. Of course, Instagram dominates the story and plays a pivotal role in the exposé of Anna Delvey, but there are also other tropes like voice distortion and fake phone number generating apps that are equally capable of fateful damages.

Another notable thing about the series is its expertise in character development. Each bearing a unique trait of their own, you could almost memorize these characters, especially after a 10 hours long marathon watch. Kacy is the one who always talks in universal truths and life coach phrases, Rachel is the sob-ery, whimpery, and easily nervous one, Neff is the uptight, loyal kind, and so on. But such absolute definitions are not without their backwash- once you know your character, you can easily predict their next move.

Even though Anna’s character started out afresh in the start through a grand introduction, “This whole story that you’re about to sit on your fat ass and watch, like a big lump of nothing, is about me. You know me. Everyone knows me. I’m an icon. A legend”, her mystifying naivety wears off by the end and becomes a drag. Her irritating mannerisms and her defying behavior start to get to you, and you just wait to know the way her head functions. Sadly, you never find that out!

Most aptly described as a modern soap opera, it is almost sad that this story got lost in an attempt to commercialize and conventionalize the narrative. It does not pay much heed as to WHO Anna Delvey was, or HOW the journalists really function. Unfortunately, it only fringes on WHERE it happens and got so engrossed in showing the glitz, glamour, and lifestyle of the high class, that it actually forgot to focus on more visceral aspects of the story. There is so much more to say- the pursuit of the American dream, women’s struggle in a male dominant world, the fine line between ethics and ambition, and more. There is a potential for a compelling story but Inventing Anna is definitely not it.

Inventing Anna is streaming on Netflix.

Who are the Favorites for the Main Categories at the 2022 Oscars?

10 Romantic Movies To Stream On MUBI This Valentine's Day