WARNING: MAJOR SPOILERS AHEAD FOR EPISODE 3 OF MOON KNIGHT.

After Justin Benson and Aaron Moorhead gave us the breakneck extravaganza in episode 2 of Moon Knight, Mohammed Diab is back to helm episode 3, which is truly a spectacle in many ways, especially in the way it treats the depiction of Egypt on the big screen. Visually stunning and sweeping in scale, episode 3 proves that Moon Knight as a Marvel show just keeps getting better with each passing installment, given how the central character is granted enough depth to keep things varied and interesting.

As a refresher, episode 2 ended with Marc (Oscar Isaac) taking over Steven’s body to fight off the Egyptian jackal set forth by Harrow (Ethan Hawke), wherein the latter manages to get hold of the golden scarab pointing to Ammit’s tomb. The shift in tone in episode 3 is immediate, as it transitions from a mystery horror to an Indiana Jones-esque vibe, with lots of divergent elements to offer.

Episode 3 opens with Marc speeding through the rooftops in search of a source who can pinpoint Harrow’s exact location in terms of the dig site. However, the source is killed by Harrow’s hired local goons before Marc can get to him, which leads to a fight (obviously). However, Marc loses control of his body mid-fight (similar to how Steven did during the chase sequence in episode 1), as he is taken over by an unknown alter that has a penchant for murder. While this fresh development is acknowledged, no answers are provided at the moment, as Marc is too preoccupied with locating Ammit’s tomb, and Khonshu’s contest diva behavior does not help matters. On asking Khonshu whether he has any good ideas, the Egyptian moon god says he has a bad one (classic), and makes alterations in the weather in order to seek attention from the gods who are a part of the Ennead. Things do not go over well, naturally. 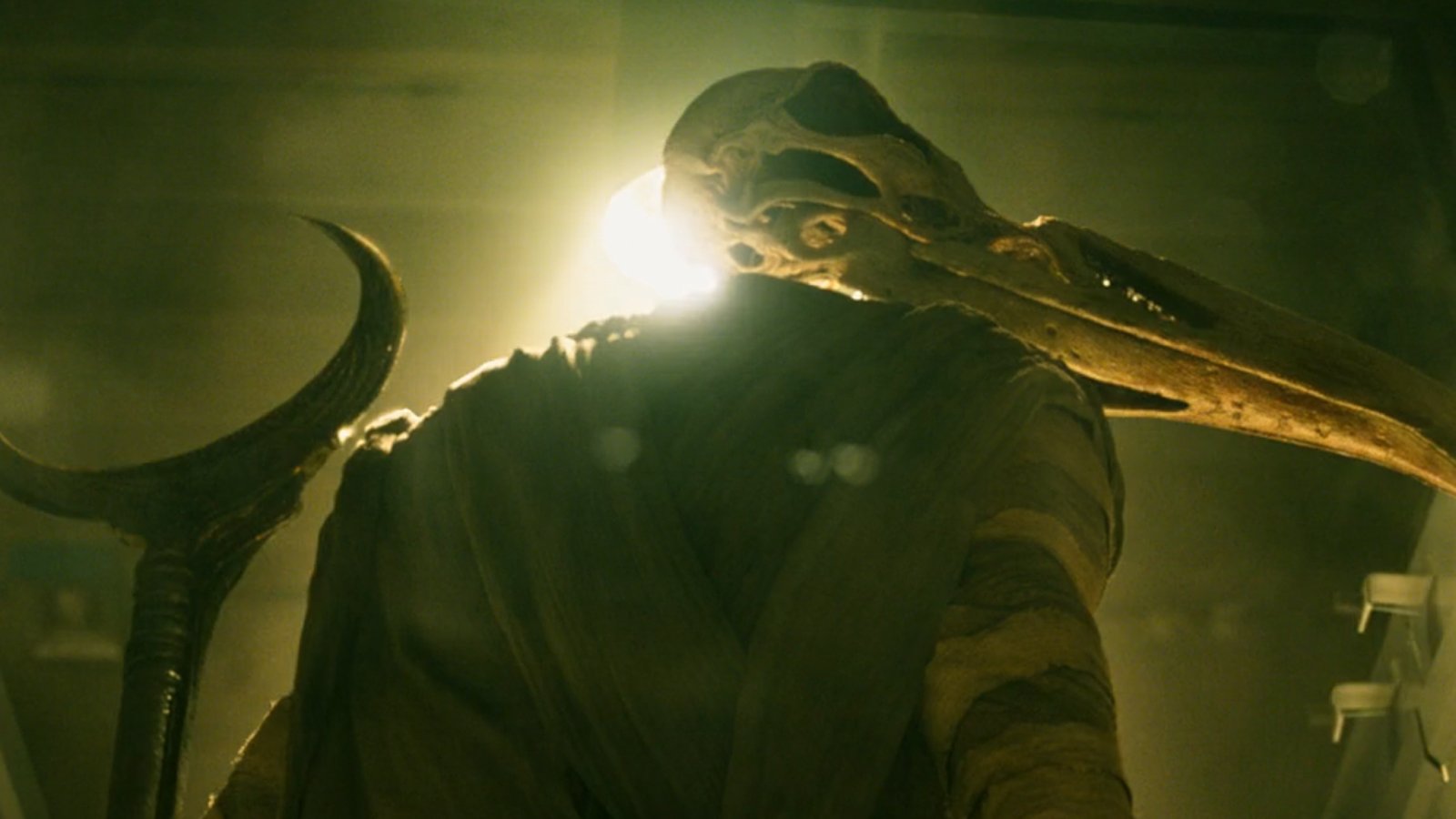 THE ENNEAD AND SENFU’S SARCOPHAGUS

The Ennead was a group of nine deities in Egyptian mythology worshipped at the Celestial Heliopolis, and in Moon Knight, the gods present in this covenant are Horus, Isis, Tefnut, Osiris, and Hathor. While the deities claim that they do not directly interfere with events that take place on Earth, they strike to maintain balance via their respective avatars, who are present at the meeting to channel the voice of the gods. Marc manages to gain an audience with the lot, which takes place inside the Great Pyramid of Giza (Egyptian mythology nerd Steven was freaking out due to excitement throughout).

Khonshu presents his case via Marc, channeling his voice through him, accusing Harrow of resurrecting Ammit from her tomb. The gods ask for evidence and summon Harrow for a hearing, who cleverly leverages Khonshu’s track record of making bombastic statements for attention and highlights Marc/Steven’s dwindling mental state. With no hard evidence to prove Khonshu’s claim, the Ennead lets Harrow go and threatens Khonshu with imprisonment inside an ushabti if he tries to challenge the status quo again.

When all hope seems lost, Hathor’s avatar provides Marc with a clue to Ammit’s location: a man named Senfu was entrusted with keeping the location of the tomb safe, which was unknown even to the gods. If Marc is able to locate Senfu’s sarcophagus, which might still be a curator’s collectible in the Egyptian black market, he might, after all, be able to carry out his mission. After the locals refuse to speak to him, Layla (May Calamawy) surprises Marc, saying that he will need her help as she is a local, and has access to contacts who can help him locate Senfu’s sarcophagus.

Enter Anton Mogard (Gaspard Ulliel), an eccentric antiquities collector who is currently in possession of the artifact, who Layla tries to play cool with in order to let Marc see the sarcophagus, coming up with a breezy cover story to make things easier. Marc, on the other hand, is terrible at being undercover, being clumsy in his dealings with Mogard, and struggling to understand what the symbols on the sarcophagus mean. Marc turns to Steven for help, who tells him that pieces of the mummified fabric contain markings, which can be pieced together to create a map. Things, of course, take a turn for the worse. Mogard’s men sense something is off about Marc inspecting the sarcophagus, and before things can be mitigated, Marc pulls out his weapon on them. A sense of momentary trust is shattered, and Mogard’s men attack Marc, who — you guessed it — summons the suit in order to deal with the situation. Before all of the action goes down, Harrow appears with his men, telling Mogard that Marc and Layla cannot be trusted, handing him the golden scarab as an olive branch. Before leaving, Harrow sows seeds of discord between Marc and Layla, hinting that Marc has not been completely upfront with her about his past and that he has hidden integral parts of who he truly is from her. After Harrow leaves, the fight ensues, and the results are glorious. There is a shot of Marc in the suit gliding downwards like a bat, a transition into Mr. Knight that is hilarious, and numerous shots of Marc using his crescent darts to get the deed done. Layla jumps into the heart of the action too, fighting off the baddies with her all her might, and managing to get the fabric with markings from the sarcophagus.

After Marc and Layla engage in a heated conversation about the past, wherein Layla says that she hardly knows him despite being so close to him emotionally, the two attempts to piece the puzzle together, but their efforts go in vain. Realizing that only Steven can help them, Marc gives him control, and the former promptly piece the bits of cloth together to reveal a constellation that serves as a map to the location. However, Steven realizes that they are “positively buggered” as constellations constantly keep changing, but Khonshu comes to the rescue by saying that he can revert the night sky to the day this exact constellation was formed. This leads to a visually entrancing, almost trippy sequence, in which Mr. Knight and Khonshu alter the night sky together, which appears as a rapidly shifting canvas of star trails — it’s simply so beautiful. However, once they locate the constellation, Khonshu is imprisoned in his ushabti by the Ennead, as they are simply following up on their warning of not messing with the elements.

Moon Knight episode 3 ends with Marc/Steven losing their powers, now that Khonshu is no longer able to walk on earth freely. A lot of work lies ahead: not only do they have to reach Ammit’s tomb and prevent Harrow from resurrecting the crocodile demoness, but they also have to find a way to free Khonshu, which will be difficult, as they have lost their powers. Without Khonshu’s armor, Marc is just a mercenary, while Steven is just, you know, Steven, although his expansive knowledge about Egyptian history will prove pivotal to navigating the mystery that lies ahead. As Layla and Marc still haven’t been able to reconcile their emotions, will Steven and Layla grow closer in the course of their upcoming adventures? This remains to be seen, but Moon Knight, so far, has been dizzyingly good at capturing different moods, while dishing out action, humor, and heart in a wonderful medley worth rooting for.

EPISODES 1, 2, 3 OF MOON KNIGHT ARE NOW STREAMING ON DISNEY+

Why “Spencer” is An Example of a Biopic Done Right