Comedy is one of the toughest cookies to crack. It usually looks easy. But that’s because the writers, directors, and actors rehearse, rewrite, and repackage a singular joke hundreds of times before sending it to you. The only thing that’s tougher than scripted comedy is improvisational comedy. Because the comedian needs to have great intuition, presence of mind, and a natural sense of humour to judge their audience on the spot and land the joke. If it works, that’s great. If it doesn’t, then the comedian has to deal with the pressure of one-upping the previous punchline while keeping the audience engaged. The topic of today’s review, Season 1 of Murderville (2022) on Netflix is a combination of these two realms of comedy. How does it fare? Let’s find out.

Based on the BBC Three television series Murder in Successville (2015-2017), Murderville is directed by Iain K. Morris and Brennan Shroff. The concept of the show goes something like this. There’s a scripted plot about a down-on-his-luck Senior Detective Terry Seattle (Will Arnett) who works with Chief Rhonda Jenkins-Seattle (Haneefah Wood), Amber Kang (Lilan Bowden), and Detective Daz (Phillip Smithey). It’s written by Marina Cockenberg, Krister Johnson, Kerry O’Neill, Anna Drezen, Hannah Levy, Adriana Robles, and Jack Kukoda. Every episode features a new murder case and a new guest-starring as themselves. This season features Conan O’Brien, Marshawn Lynch, Kumail Nanjiani, Annie Murphy, Sharon Stone, and Ken Jeong. Now, these guest stars don’t have a script and have to improvise on the spot. And they’ve to correctly guess who the murderer is based on the clues present in front of them. 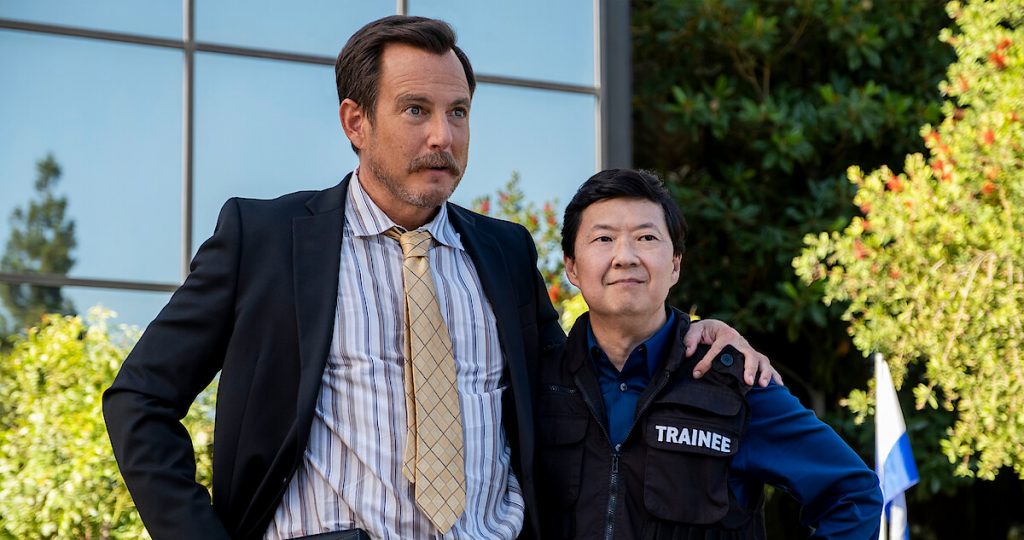 Murderville starts off very strong with Conan O’Brien solving a case where a magician’s assistant has literally been sawed in half. The absurdity of the crime and the suspects managed to crack O’Brien up. In return, O’Brien makes Arnett and the rest of the cast break character quite a few times, which just makes the jokes even funnier. Marshawn Lynch’s episode isn’t that good, largely because maybe he isn’t an actor or an entertainer in that sense. The episode itself is very ambitious with the use of a triple role for the suspects. But since none of the triplets is funny, thereby coming off as a loud exposition machine, neither Arnett nor Lynch is able to do a lot with it. Kumail Nanjiani’s episode is an absolute howler though, which is kind of a no-brainer since Nanjiani is a brilliant comedian himself. He nearly derails a scene by making Arnett laugh a little too hard with his over-the-top antics.

Related to Murderville (Season 1): In From The Cold (Season 1) Review – A Show That’s Essentially Black Widow And Mission: Impossible On Steroids

Every episode has a section where the guest star has to go on their own, equipped with an earpiece, and say and do exactly what Arnett tells them to do. And while all of them are quite good, it’s the one with Annie Murphy that takes the cake. Everything from her outfit to the way she barely keeps her composure is funny. The episode after that one featuring Sharon Stone is surprising since she isn’t synonymous with the comedy genre. Yes, she has done a few comedies here and there. But you won’t see Stone and laugh out loud instantaneously, right? Yet, there she is with her dry, deadpan humour, ripping through scene after scene, and even topping Arnett. She’s also the only star in the show that gets to do a lot of physical comedy and she nails that too. Ken Jeong’s episode seemed like a slam dunk. However, it’s hilarious only in parts.

Additionally, the aspect of Murderville that I really liked is the murder mystery. And the fact that the guest stars don’t just win because they are the guest and they’re stars. Morris, Shroff, and the rest of the team take that part pretty seriously and plant legitimate pointers about the guilty party via the dialogue and the production design. So that when Chief Rhonda recaps all the clues, you organically feel smart for catching them or, well, feel stupid for missing them. That said, after watching Murder in Successville, it seems like Murderville would’ve benefited from its British counterpart’s gimmick of making the guest starts to play a character instead of just being themselves. That probably would’ve freed them a lot more and allowed them to go a little crazier with the premise. Because it’s not just the audience who has to separate the art from the artist. The actor has to do the same to truly commit to the act.

In conclusion, Murderville is a moderately funny exercise. It hugely depends on Will Arnett’s performance. It relies very heavily on the guest stars’ ability to be quick on their feet. On top of that, the fun factor very much hinges on your love for Arnett and the guest stars in question. Because if you’re unaware of the guests, then you’ll probably not enjoy the show at all. With all that said, do give Murderville a go if you are in the mood for some clue solving and dumb fun.

Murderville (Season 1) will premiere on Netflix on February 3, 2022

Through My Window [2022] 'Netflix' Review: Another Teen Romcom That Tries Hard But in Vain