Borderlands [2021] ‘DIFF’ Review: A Compellingly Observed Documentary about the Edges of the Country and its People

Famous fictional writer Arthur C. Clarke had this to say about borders, “The only way to define our limits is going beyond them.” Samarth Mahajan’s Borderlands (2021), an internationally co-produced documentary, goes on to confirm this. These are stories of people who crossed the borders for their existence, survival and most importantly for meaning. These also happen to be stories of people who live on these borders, living a life that’s not politically conflicted or motivated enough, to be heard or told of.

Borderlands captures both the personal and the distant, from most of the borders of northern India. We are introduced to Deepa, a recent immigrant of Pakistan living in Jodhpur, Rajasthan. At a first glance, you’d think that Deepa is someone who’d not have a hard time adjusting to this change in location. Like all others, she too talks in ‘Hindi’. But then, we discover that her medium of language, in fact, is Sindhi and Urdu all along and she doesn’t understand the Devanagari script. The often funny and lonely Deepa faces these problems with a face of hope and aspires to become a nurse one day.

Then, we meet a man named Surjakanta. Living just near the India-Myanmar border in Manipur, the man emphasizes the value of filmmaking. He tells us the story of the inner turmoil in the state and then, goes on to re-emphasize the power cinematic storytelling holds. On the face of it, he looks like another lower-middle-class man living in India on the edge. 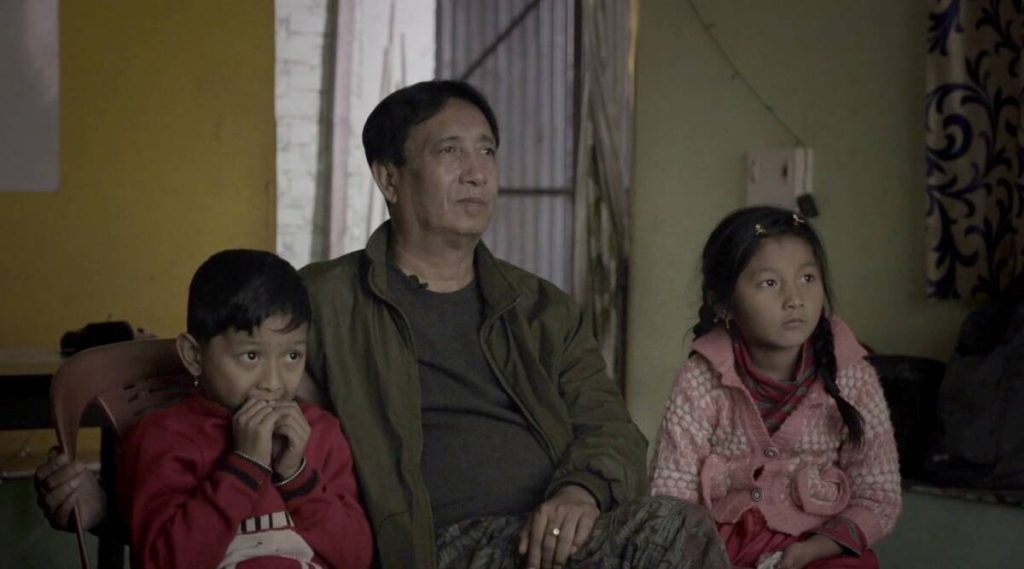 However, as we begin listening to him, we discover his thorough wisdom about the art of filmmaking and how important he considers representative direction to be. Then, we move towards the Birgunj border of India and Nepal, in order to meet the third subject of our story, that is Kavita. Dressed in a uniform-like salwar suit and interrogating a few men with women, she keeps a check on the sex trafficking attempts there. We get to witness her unique way of operation and her promising, progressive outlook.

We also meet Dhauli, who is a Bangladeshi housewife, living with her two little children. Personifying the image of an ideal Bengali Hindu housewife, Dhauli feels lonely with the erection of these borders in her native Naragon. She laments the fact that she wasn’t even able to lift her little sister, born right after her marriage, into her arms. Nevertheless, she keeps on a smiling face with apparent flashes of regret and sadness, performing puja rituals and odd chores in her hutment. There’s also an intrinsically personal encounter to be seen here- Samarth’s mother Rekha, that is.

All her life, Mrs Mahajan has been living near the Wagha border, married only a few kilometres from the same. However, her daily chores, cooking, cleaning and looking after the family has never given her the privilege to see the Wagha border herself. The last, and the most disturbing, the subject is Noor. She’s a girl who was trafficked from Bangladesh to India and is currently living in a Kolkata-based shelter home. Her story is emotionally taxing, resonantly real, and immensely heartbreaking. In fact, it has so many upturns that I choose not to reveal her backdrop.

First things first, I must mention how wonderful the realist aesthetics of Borderlands are. The film’s cinematography and score work without succumbing to lateral, exploitative realism. Instead, a constant focus is upon the expressions of the subjects, ranging from suggestive glances to forced smiles. We also get a very empathetic touch to the questions.

While a desirable formalism is maintained throughout, there are occasional dashes of genuine warmth and humour. This allows us to soften towards this interview. This is the most important key factor in a cross-cultural documentary- an interview must not feel like an intrusion. Very fortunately, Samarth’s approach stays far from it. Even at its darkest, the film doesn’t nudge into an overtly political lecture. It stays a compelling story that deserves a hearing.

His own personal reflections equip Samarth Mahajan with an understanding of the material. The National-Award winning director of The Unreserved employs some kind of an indigenous crew in all the spots to cover all of these stories. This doesn’t just equip the film with a distinctively contemporary flavour. It also represents these stories in a unique way, one that isn’t usually seen in the documentary medium of Indian cinema. Although Samarth has also covered a part of himself in the film, he never puts the person on a pedestal. On the contrary, the stories of the frontline middle-class are more engaging.

This also doesn’t mean that Rekha’s story is the least engaging. It’s just as expressive, and you can draw a parallel between her life and that of Dhuli’s. Borders are a cage for people living on both sides, however, the cages are dual for a housewife. Relentless cooking, cleaning, wifehood and motherhood trap her in the system.

Similarly, the microcosmic parallel between the lives of Kavita and Noor. Kavita, of course, represents hope through her sheer actions. She’s a resilient woman fighting a prevalent bordering social evil. However, Noor is not embracing complete darkness either. She seeks to be upfront in her life and hopes to reclaim all that she has lost until today. The only male subject here, Surjakanta, represents the ambitions of the director. He finds cinematic storytelling as the sheer representation of the people and I loved every bit of his sentiment.

Overall, Borderlands (2021) offers a unique insight into lives just around our corners. It also teaches us, for the lack of a better word, the value of representative storytelling. Without resorting to third-party narration it stands masterfully.

Borderlands [2021] ‘DIFF’ Review: A Compellingly Observed Documentary about the Edges of the Country and its People