Home»Reviews»Netflix»Kill Me If You Dare Netflix [2019] Review: A rom-com that closely follows the blueprint
Netflix/Reviews

Kill Me If You Dare Netflix [2019] Review: A rom-com that closely follows the blueprint

Titled on Netflix as ‘Kill Me If You Dare’, Öldür Beni Sevgilim is a Turkish language film. Directed by Senol Sömnez, it focuses on a couple (Demet and Okan) with money and marital issues who imagine the worst about the other. After they win the lottery, they decide to stay together and literally respect their words from the prologue, “till death do us part.”

We get taken on a five-year time leap where the charm of their rom-com like marriage has worn off. Demet (Seda Bakan) works as a fashion boutique in a mall whilst Okan (Murat Boz) is an insurance agent. Her character is one that craves the life others have. At a lunch, which we later come to know, is their anniversary celebration there seems to be an invisible wall between them. Okan and Demet look like two strangers who have been made to sit opposite each other at a mall food court due to a space crunch.

Similar to Kill Me If You Dare Netflix – Unbelievable Netflix (2019) Review: The Truth Will Set Us Free

Demet is frustrated and chastises Okan for having an anniversary lunch at the Kebab place in the food court of the mall she works at. She is incredulous at seeing that her anniversary gift is an iron and wants to know why they can’t go on a vacation. When at home, she hates the fact that Okan is being frugal about repairs and yearns for some excitement in her life. 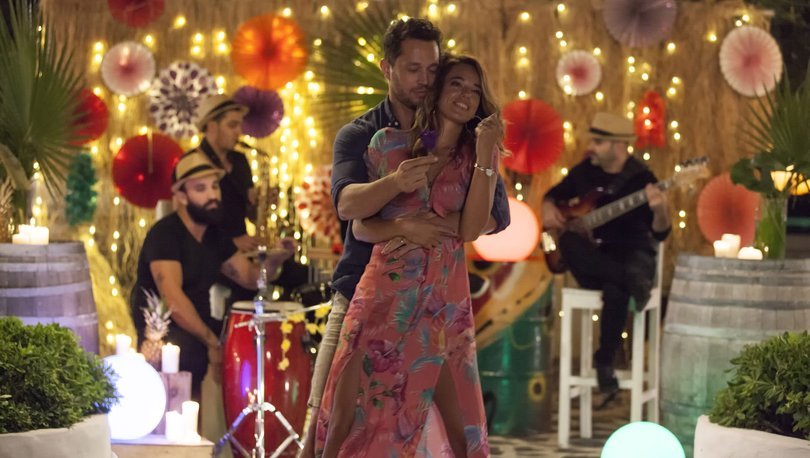 Right here the seeds of stupidity are sown as they win the lottery. The money has clouded both Okan and Demet’s minds as they seem to have lost the ability of independent thinking. What happens from here on is a reflection of the mindsets of the present day and a reflection of our social media culture. Classic misunderstandings 1.01 comes to the fore as Demet and Okan set out on a vacation. Somehow their best friends are also present at the destination. These guys’ only job is to ensure that their friends succeed in eliminating the other, but they team up and decide that the money should be theirs.

I was yawning at the half-hour mark for I realized that I was going to be subjected to witness a series of well-laid plans where everything would go wrong. The film which was punctuated with puerile gags did manage to follow the rom-com blueprint perfectly, but surprisingly managed to pack in an intense ending (shameless parody of iconic films) which could appeal to action buffs (it’s just some action after an hour and a half of drivel)

Demet is highly relatable as her frustrations are what people experience frequently. She is young, carefree and succumbs to what many individuals struggle to avoid which is considering their own lives meaningless because someone else has had it better. She breaks into excited jigs whenever excited without concern to onlookers. In one scene she gives her employer a piece of her mind which could trigger a dual audience response i.e. what an impulsive idiot or this is exactly what I play out in my mind.

Okan played by is the complete opposite. He is silent, thinks about every detail and looks to be in his words, “frugal.” The common thing about them is that they both overthink and assume the worst about the other and their actions drive the other to act in a way to lend weight to their absurd thoughts.

The opposites complement each other and fit in with the notion of opposites attract. There is a lack of chemistry that works here as they are a couple with trust issues and are attempting to polish off the other for a large part of the film.
I was appalled by a scene from the final act and consider it an insult to Stanley Kubrick. This film doesn’t have an emotional impact like Kubrick’s one and the cheap parody of that iconic scene made me cringe even more than I had during the film. The climax scenes also showed me something I had never seen before. It made me wish I had done what the actors did after the fall through a window.

More things could be questioned but by this point, I had just given up and was waiting for the end credits to flash on the screen. I felt it unfair to refer to the guys in Dumb and Dumber as such when we have the characters from this film. Writer Murat Disli seems to have put together a story akin to how college students scramble to complete an assignment just minutes before the deadline. He knew his beginning and his ending. However, he didn’t know how to connect the two endpoints engagingly and resorted to filling it with standalone clips (which can be described as a comedy of errors) that just don’t fit in. One of the ‘plans’ could have easily been eliminated without troubling the story. This is a rom-com that I hate and wouldn’t watch again.

‘Kill me if you dare’ does have some wonderful shots of adventure sports and the Turkish countryside. This could appeal to one’s inner child and prod them into taking that trip they have been putting off for years. However, as a film, it is meant for those who wish to respond to time calling out to them in the words of the title, “Kill me if you dare.”

Kill Me If You Dare Netflix Trailer

Kill Me If You Dare is now Streaming On Netflix

Kill Me If You Dare Netflix [2019] Review: A rom-com that closely follows the blueprint