Last Flag Flying [2017]: Happiness, Sorrow and All That’s In Between

“What is life, if not bittersweet?” On an individual level, Last Flag Flying stands out as a silent celebration of happiness, sorrow and all the hoopla in between. When taken a broader perspective, it hits soaring political notes as Linklater captures the fear of an entire nation when Dylan croons “It's not dark yet but it's gettin' there” while the end credits roll down.

Conversations come easy to somebody like Richard Linklater. He has exercised his command over writing while penning the swan songs of love in Before Sunrise / Sunset / Midnight, wild music escapades of 80’s in Everybody Wants Some! and delicate exchanges of growing up in Boyhood. Add this knack to a landscape of grief in Last Flag Flying and we see the abundance of colors even in humanity’s darkest times.

Traversing the thin line between social and political commentary, Linklater introduces us to the Vietnam War veteran trio – the medic Doc Shephard (Steve Carell), ex Navy Corps – Sal (Bryan Cranston) and Richard Mueller (Lawrence Fishburne). Each of them carrying a staple un-heroic past, each dabbing their mental scars with a new life and each of them, failed to settle their history. The brilliant under cutting screenplay hints at the background while never showing the cards up until the end. It then collides these unique characters with a sorrowful situation shadowing their early war torn lives which then leads us onto a bromance trip brimming with acid humor and real emotions in equal measures. 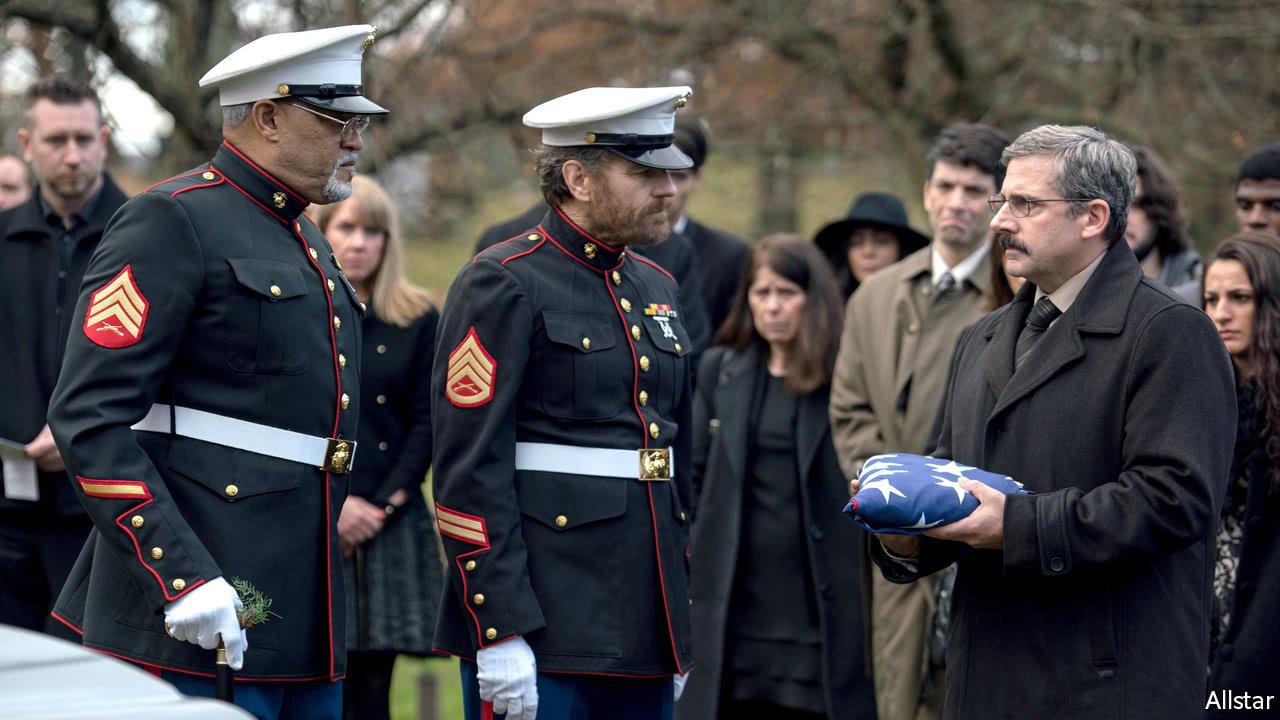 Although, there are slight hiccups where the narrative treads into waters of self indulgence and the message becomes too much on-the-nose. But the content is driven ashore by a self assured and deeply committed performance by the incredible cast – lead by a deeply convincing turn of Steve Carell as somebody who is battling with grief and moral dilemmas. The soothing country soundtrack, nostalgia tinned present along with the timely portrayal of Government’s fabrication and eventual twisting of reality packs in enough punches for an essentially basic script to soar from the pages.

“What is life, if not bittersweet?” – Linklater muses upon the concept while extending a certain sense of place and time to this personal ode. It might feel minuscule in scale, but this love letter to unwavering spirit of life is not a small venture by any means. On an individual level, Last Flag Flying stands out as a silent celebration of happiness, sorrow and all the hoopla in between. When taking a broader perspective, it hits soaring political notes as Linklater captures the fear of an entire nation when Dylan croons “It’s not dark yet but it’s gettin’ there” while the end credits roll down.

Before We Vanish [2018]: An Alien Invasion Film Exploring the Reason for Human Existence

Art and the Obstinate Expectations of Avant-Gardism

Last Flag Flying [2017]: Happiness, Sorrow and All That’s In Between