Streaming on SonyLIV, Meme Boys (Season 1) is a Tamil-language show directed by Arun Koushik and created by Rajiv Rajaram & Drishya. Written by Neil Julian Balthazar, the show tells the story of four engineering students and their adventures. We go on a hilarious journey along with Mojo (Mohan Jyothy Babu, played by Adhitya Bhaskar), Jumbo (Karthikeyan, played by Siddharth Babu), Power (Srikumar, played by Jayanth), and Julie (played by Namritha) when they navigate their way around winning a meme fest (a meme-making competition). Set in a fictional Apoorva university, the narrative occurs in the areas around Chennai where this college appears to be just another educational business venture among others.

The meme fest poses an opportunity for these students to win a big amount of 10 lakhs. For Jumbo, it matters because he wants to buy an expensive laptop (a MacBook) whereas Mojo wants it to gain respect as an engineer from his parents, who would rather have him run their family’s grocery store. Low hopes from this generation of engineers become the punchline of its premise where these younglings from frustrated youth try to escape. Besides them, two other students join their mission to win, Power more so in support of his two friends, and Julie since she is the one who has a device good enough for them to enter the meme fest. They enter the meme fest under the name of ‘Meme Boys’ and start posting on their page.

While these motives start their journey, their dean Narayanan (Guru Somasundaram) poses a threat to their progress and becomes a formidable obstacle. He opposes every other attempt from the meme boys that would criticize the institution under his governance and would try to find any possible way to crush the voices and silence them. The fun comes in the narrative of ‘Meme Boys’ from the fact that the dean does not know the gang of four to be the ones running the page. The way these students secretly try to work out a way through their mischievous plans brings in the humor. 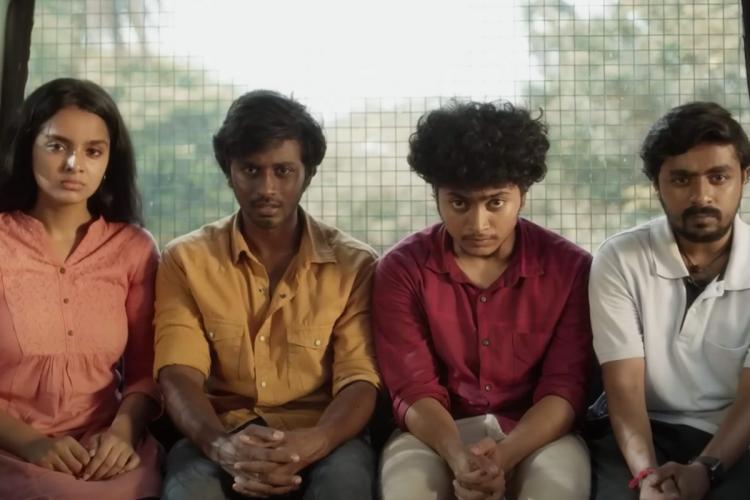 What starts as a fun way for them to earn more money, becomes much more for these students. They bring in different faultful aspects from the college and share comical remarks through their memes peppered with some pop culture references. Different topics get raised through these memes that connect with most of the students due to their relevance to them. From bad canteen food to unreasonable hostel curfew hours, memes comment on everything that the meme boys observe. And it does not come as a surprise when their dean does not appreciate him, or his institution being criticized. So, the tug-of-war between him and unknown strangers defaming him begins when he keeps looking for different ways to know the identity of the students behind this and to get hold of them.

The show is filled with several pop-culture references that would be best understood by those who have lived and breathed every bit of it. For someone like me who hasn’t explored much of it, it is difficult to comment on that aspect and to find any parallels. While I sense these referential comical bits, I won’t comment on them due to my lack of knowledge. What I would still say about this season of Meme Boys is how it remains a largely engaging and comical show, not just because of its running gags and topical jokes but due to its metaphorical connections.

The narrative of Meme Boys presents a struggle against formidable authority – that looks for every other way to stay in power and makes the lives of those beneath as difficult as possible. As a result, the situations in the show’s script become more than what they appear to be on the surface. Several parallels with such governance from reality make it a surprisingly critical take on the same. While doing that, the script shows the influence that social media has in today’s age and how its impact depends on whose hand it falls in. Guru Somasundaram, whose last popular venture was the Malayalam superhero film, Minnal Murali, becomes the pillar holding the weaker parts of the show’s execution. While his performance does not require him to go into emotional depths like his other works, his comical timing makes the show consistently watchable.

Where to watch Meme Boys

Only Murders in The Building (Season 2), Episode 6: Recap & Ending Explained

Finding Bliss: Fire and Ice [2022]: ' NYAFF' Review - An Insightful Exploration of Value of Art in Our Lives