Wonderfully surprising. That is the definition of Brazilian cinema in 2020, which is as resistant as ever and with the necessary reinvigoration, following releases like Bacurau and The Invisible Life from the previous year. We have one more work to look out for here, Memory House.

The fascination of the film lies in the duality between the script and the direction (done by João Paulo Miranda Maria) that doesn’t necessarily look like it comes from the same person. While the script does not take on a narrative focus and suffers from episodic sequences, the direction announces one of the most original works in recent cinema. Miranda Maria’s blunt criticisms are clear but since there is no distinction between the psychological drama and the thriller elements the problem of the film is based much more on situations than on a joint narrative itself. However, he uses the dialogues surgically, thus causing the proper impact.

Meanwhile, with this directorial approach, we have an aesthetic identity and consistency in tone. Inspiring the use of classic elements to create tension like travelings and zoom in with sequence plans that unite the documentary and surrealist feel is done really well. Miranda Maria also establishes his orientations to the cast in a very particular way, a robotization of human relations that pass through the Shakespearean plays and arrive in the pessimistic naturalism of Ingmar Bergman, with Antonio Pitanga showing a growing power that results in an animalistic and impressive physicality for an actor over eighty years old. 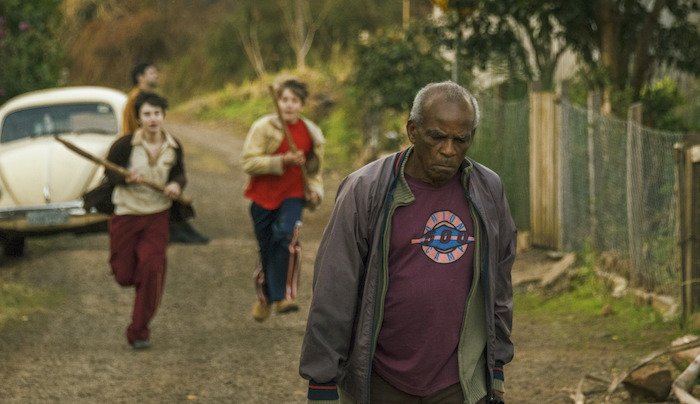 The first ten minutes in particular contain two iconic sequences that deserve full attention. The first deals with an entirely white environment of a dairy industry with the exposure of extremely strong light. In one of the best metaphors about racism ever seen in cinema, a splendid union between photography and costumes is conjured. The other is almost an homage to the scene of the job interview of The Shining (1980), deconstructing the history of slavery in Brazil. The power of two camera movements makes the simple into something terrifying vigorous.

In a more mathematical way, the first twenty minutes establish a promising atmosphere that goes considerably in its next fifty minutes through the indecisive script. With the gradual metamorphosis of the central character through dreamlike violence, the audience gets a necessary hook with its final twenty minutes serving as a catharsis. It’s almost like Deadlock (1970) where classic elements of the western are subverted by the direction of the cast and editing.

The whole atmosphere of the work is also established by an environment that embraces rural terror instead of the usual beautiful rural one and also by the aforementioned costume design which plays with Brazilian northeastern traditions. It helps in uniting it with science fiction creating the sensation of ideal timelessness.

Memory House, despite having a little concentrated script is the definition of vigor in cinema. Through its direction and technical aspects, it establishes João Paulo Miranda Maria as one of the most exciting directors in recent years.