Men (2022): A Lush Allegory That Does Not Skimp On Scares: A Studio A24 film in the vein of Hereditary and Midsommar, Men (2022) is the rare arthouse horror that seamlessly blends cerebral symbolism with true terror. Men explore themes of toxic masculinity, trauma, and grief through the story of Harper (played by the masterful Jessie Buckley). After witnessing the death of her abusive husband (Papa Essiedu), Harper seeks a restorative getaway from London in the English countryside, renting a country house from a local man in the Cotswolds. In an elevated version of the vacation gone wrong trope, Harper soon finds herself stalked by old traumas and new terrors alike.

Harper arrives at a bucolic paradise, a quaint yet spacious home surrounded by lush greenery. She is first welcomed by an apple tree, and the camera zooms in on her blissful expression as she takes her first bite. The cinematography is sensuous yet forbidding. Indeed, the apple, which the camera lingers hungrily on, later reveals itself as a powerful portent of paradise lost. The homeowner (Rory Kinnear) is a friendly, ruddy-faced older man with a thick rural accent. He gives Harper a tour of the house, which goes smoothly with the exception of a few awkward moments. The homeowner, seeing Jessie’s half-eaten apple, makes a “forbidden fruit” joke about a prohibition against pilfering apples that falls flat. He also struggles with Harper’s luggage, which he insists on carrying, citing chivalry. The house is a rustic beauty but its blood-red walls foreshadow the bloodshed to come. 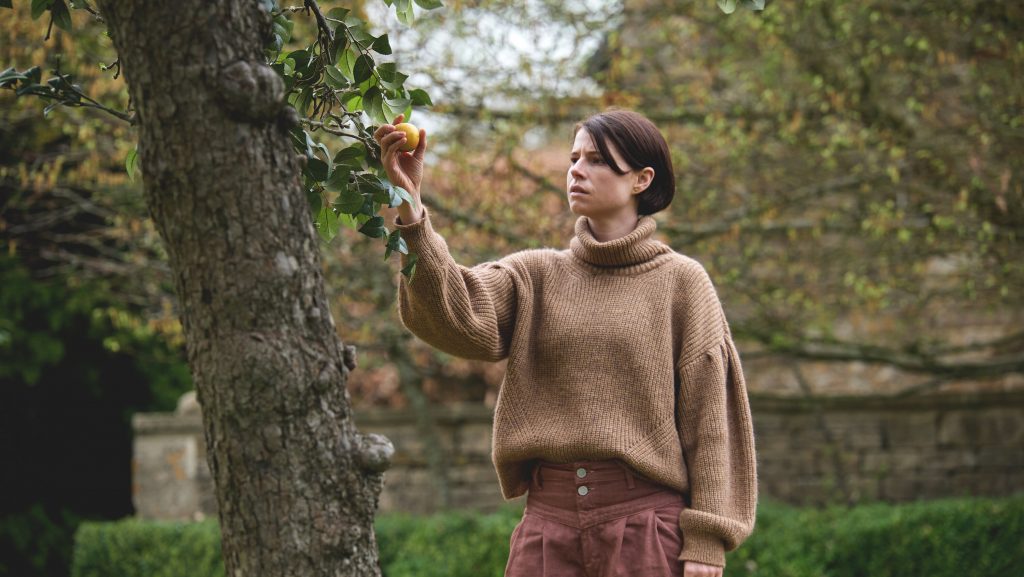 The next day, Harper takes a walk through the verdant countryside into a forest. She visibly luxuriates in her natural surroundings and we exhale along with her. Her delight – gleeful, almost childlike — is palpable when she finds an abandoned train tunnel in the forest and vocalizes into it, her echoes creating a simple polyphony. Her joy is interrupted by a man who suddenly appears at the other end of the tunnel. After fleeing in shock, Harper stops to admire another beautiful country home — where she is taken aback by the sight of another man, this time completely nude and facing her from the yard. The tension ratchets up as strange encounters with local men continue, escalating into increasing hostility. Meanwhile, the events leading up to her husband’s death are revealed in Harper’s haunting flashbacks. Jessie Buckley, always a delight to watch, delivers a particularly visceral performance in a church scene where Harper, alone and overcome by a flashback, repeatedly screams.

After its relatively literal introduction, Men (2022) takes a sharp turn into the wildly allegorical, offering multiple layers of symbolism, including a critique of toxic masculinity and a parable of grief, trauma, and healing. Here, director Alex Garland’s mastery over the stylistic elements of the film unnerves as much as it delights — its lush cinematography features long shots of the verdant countryside, its fugue-like soundtrack echoes Harper’s tunnel singing, and its nightmarishly surreal practical effects convincingly transform Rory Kinnear into five distinct characters. Haunting images of the antagonistic men Harper encounters merge with the natural landscape, suggesting that the darker side of masculinity is as inexorable as nature itself — the naked man grows increasingly covered in foliage, seminal images of dandelions abound, and a deliciously Cronenbergian birthing sequence evokes the vicious cycle of toxic masculinity. And remember what I said about Men delivering true horror? Besides maintaining nail-biting tension, Garland includes a scene with a hand that made me (an avid horror fan who ate dinner while watching The Human Centipede without batting an eye) cringe in disgust and delight.

While much of Men (2022) focuses on the ubiquity of men behaving badly, it also presents an allegory of grief and healing. The reality of the films’ events remains a question mark – did the chaos unfold in real life or only in Harper’s traumatized psyche? Either way, it’s real in the ways that matter and one thing is clear: in the wilderness of the Cotswolds, Harper finds not the gentle healing she wants but the brutally confrontational catharsis she needs. Healing, Men asserts, is not a walk in the park. It’s as visceral and unforgiving as Nature herself. A treat for the senses and mind alike, Men retains an intentional sense of ambiguity, toeing the line between dream and reality, story and myth.

On "Vertigo" and the Obsession for Control of Total Reality