Stephen King’s 1987 novel Misery, inspired from King’s  battle with substance abuse, is widely regarded as one of his most compelling and consistently terrifying works. According to Stephan King,  Kathy Bates’ character personifies his dependency on drugs and repercussion of drug fixation  – making him feel alone, pushing him in solitude, while drug taking control all over him. King very meticulously captures his self inflicted pain and weaves a tale about a best selling author held captive by his self proclaimed “number one fan”. 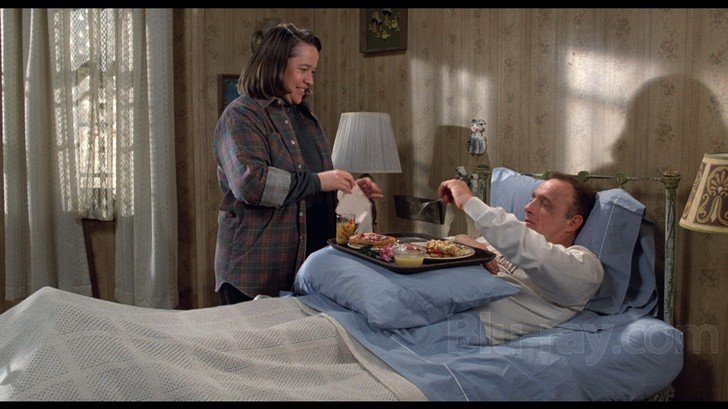 Paul Sheldon (James Caan), a celebrated and successful popular novelist for romantic ‘Misery‘ series, is suffering from what might be called writer’s blockade.  To break his own monotony of writing only romantic series, he attempts on writing  serious stories, ending the most lovable character, also happens to be the lead protagonist of his Misery series, “Misery Chastain” in his latest manuscript.  On his way back to his home, he is caught in a blizzard and his car goes off the road & has left him with two splintered legs. Paul is saved by resourceful nurse, Annie Wilkes (Kathy Bates), who digs him out, carries him to her isloated home for nursing until phone lines are up and snow blocked road are cleared for an ambulance.

Annie Wilkes has read every line Paul Sheldon has ever written, and she self proclaims to be his number one fan, and quite evidently it is established in later part when local store owner tells cop that Annie always had reserved her first copy of Paul’s novels. Just to heightened the intensity of her ‘fanboy-ism’, she goes berserk after realizing that  her favorite character, ‘Misery Chastain’, has been killed in the manuscript of his latest work. Now she holds him as a prisoner, and Paul laid up on the bed, with both the legs injured has nothing working in his favor, and has to survive on the mercy of Annie. 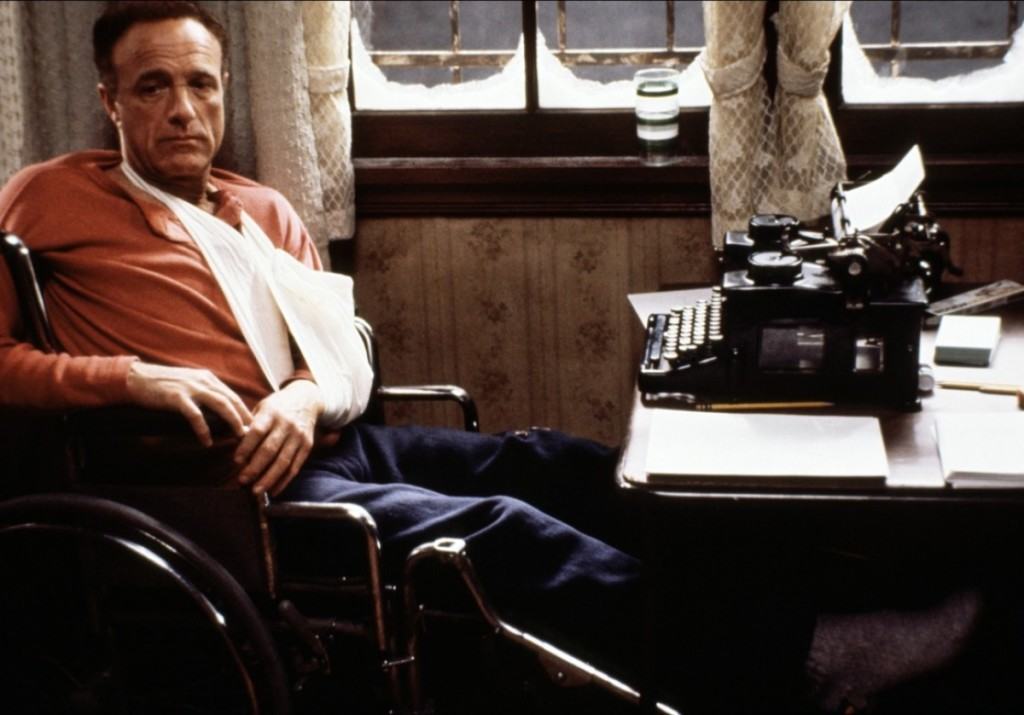 ‘Misery’ literally inflicts on both the characters in the film. Annie is inflicted with the pain that Paul has killed the character of Misery, while Paul is in physical and psychological pain tormented by Annie’s manipulative & psychotic behavior. While also, Misery tries to show the symbiotic relationship between a celebrity & fan, quite literally and symbolically. It emphasis on how sometimes fictional character becomes so dear, that it blurs the wafer thin line between  fiction and non fiction for their fans, and if those characters are ill-treated, it can push their fans to an extent on them being deranged (George R R Martin you better see this film, and think  zillion times before you even think of mercilessly killing Tyrion Lannister ).

Annie Wilkes screams in anguish, “Misery can’t be dead, she has to be alive.” This is ironically humorous that Paul had to bring back Misery Chastain to keep himself alive. And on the top of that, he had to go through the misery to keep himself breathing.

Annie Wilkes is a lonely sole who derives entertainment from Sheldon’s written fantasies, she even named her pig ‘Misery’. Bates flawless slips into the character of any common fan of any celebrity, immaculately captures the nuances of  an ardent fan, and almost like a jelly, she transits her initial passive aggression into psychotic by the end.

Misery functions like a suspense and psychological horror that taps on very common fear of human beings.  What an obsession of a fan can lead up-to ? What if a captivated writer is forced to write against his will ? How you  survive when you are living on the mercy of your captor  ? Misery rests on a chilling and plausible predicament.

The only flaw in the film is that the gradual realization of horror of Paul’s plight in an isolated cabin is hinged in a perfunctory manner. But then that is just nitpicking in this almost flawless film that gives us nastiest nurse character since Louise Fletcher  in One Flew Over the Cuckoo’s Nest.

Misery has a great story, it even plays out on the screen quite naturally.  Rob Reiner does adapt the film honestly to its source material. And that is the reason, why Stephen King wanted Rob Reiner to either direct or produce the Misery, as he was impressed with  Reiner’s Stand by Me (1986).

Misery has subtle tone to its horror element that might not appeal to those who are looking for anything like Carrie and The Dead Zone.  It closely resembles King’s another novel based film ‘The Shining’ in its low key tone horror derived from a person slipping into paranoia.