Starring Halle Berry, Sheila Atim, Adan Canto, Shamier Anderson, and Valentina Shevchenko, Bruised is a sports drama film that attempts to focus on the ups and downs of the journey of an MMA fighter.

Bruised opens up with a montage highlighting the advent of women’s MMA and presents Jackie Justice as the first reel character we see. Following the montage presenting us with dominant UFC champions, we expect Jackie Justice to be a top champion, who will rise. However, she flees the cage and enters a life of oblivion. Bruised by her traumatic experience within the cage, she is also bruised by the dismal curveballs that life seems to constantly throw at her- Sports Drama vibes.

Akin to most films of this genre, Bruised also adds in a bunch of elements to highlight the protagonist’s struggles, i.e. a classic run-of-the-mill sports drama.

Sports dramas have been around and always will be around. The fact that they have been around makes it a tough subject to execute, as any film is likened to a plethora of other films. In this case, Bruised, a combat sports film will obviously be likened to many films like Rocky, Million Dollar Baby, etc. What makes the above-mentioned Oscar winners work is the fact that if one looked at them as dishes, each element complemented the other to make for a wholesome experience.

Unfortunately, in Bruised, director Halle Berry serves up elements that don’t enhance the primary angle, nor do they blend in. They are just glossed over and may make audiences believe that a TV show or a documentary could have allowed her to flesh out each element and present a wholesome film to highlight the struggles of the lead character. Furthermore, what really hurts Bruised is that showing and glossing over too many elements took away the sporting aspect. 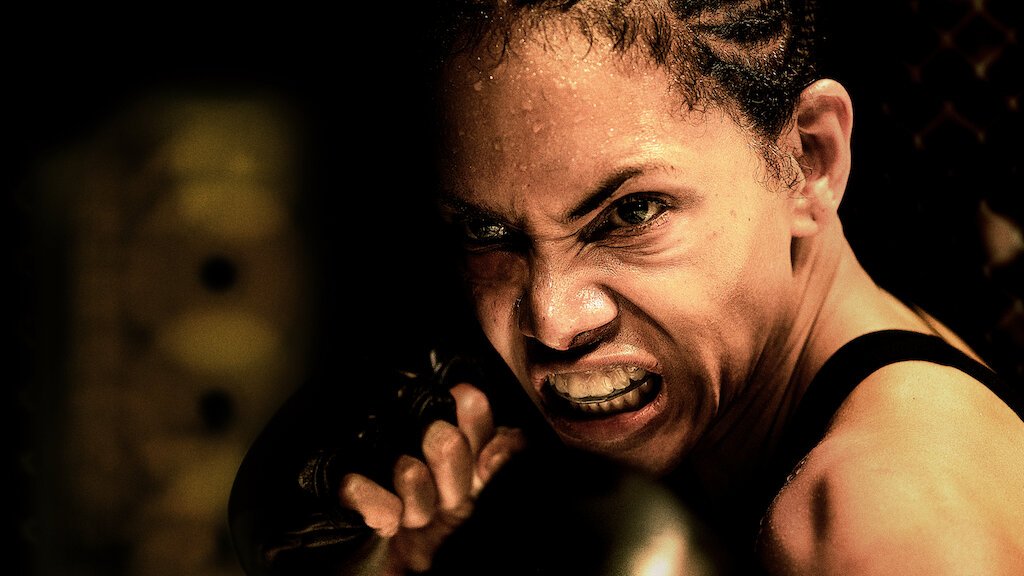 A primary instance of it was when Jackie leaves grappling training just as she was getting into it. She did so to pick up her son from school and do the shopping. The film is laced with breaks from one strand and you can’t sink your teeth into one element completely.

If one were to tell me that Bruised was a story of an MMA fighter who had to support her kid, I’d say that I didn’t get the feel from the film. On the flip side, if one were to say Bruised was a story of a single parent who was a fighter… well, that also didn’t get conveyed, but it felt like the sporting aspect was just an oversight. Also, was she fighting for money? No, right? So what is it? They do convey that, but the build wasn’t given.

In the absence of the sporting aspect, Bruised may not be memorable and could possibly be relegated to a one-time watch. That is, if you watch it till the end, as you may get frustrated with the meandering journey. At one point, after what felt like an eternity, I hit pause and saw that barely 50 minutes had elapsed and there was a whole 80 minutes left.

Whilst that would imply a build to the final battle against some scary foe, that isn’t the case, as Lucia “Lady Killer” Chavez isn’t even introduced right until the third act. Also, Shevchenko’s character isn’t a traditional villain. Furthermore, if you figured the last fight would serve up a treat, we’re a bit 50/50 on that too.

Related to Bruised: The Best Sports Films of all time

While the direction and storyline left much to be desired, the makeup team really did wonders. They didn’t present Justice as a glamour queen. Instead, she looked like a fighter who had to balance training with her life. Halle Berry’s character also literally had bruises across her face.

As Jackie Justice, she succeeds in her portrayal of an individual who knows nothing else but to fight. An individual, who, without fighting, seems clueless and detached from everything. One who can’t seem to gel with her mother or her son. Good character, but I really can’t say good sports film character. Perhaps if Bruised was marketed solely as a drama, it may not have disappointed.

Immaculate, played by Shamier Anderson, gave me Clubber Lang vibes with his look. He comes across as the promoter who seeks to use the athlete as a disposable tool. There is a scene beyond the hour mark that really drives this home as Immaculate is no caring manager like Mickey Goldmill and Frankie. But even he, as the one who comes closest to being the antagonist, doesn’t seem to be rooting against Justice. It is the perfect presentation of a manager, as his role can be seen as an unconventional motivator or a greedy promoter.

Sheila Atim as Buddhakan is the grounded piece of support that is there to look out for Jackie and even the viewer gets a sense of calm when she is on screen. Whilst she serves as Justice’s head trainer, things progress even away from the sport. Writer Michelle Rosenfarb should have built on Buddakan as the one to ensure her story of an MMA fighter was focused.

MMA training doesn’t play a large part, apart from the sequence of her running on the beach and the promenade (now which movie have I seen that in before?) and the gym sparring sessions. Bruised isn’t even engaging and despite getting attention to the sport, it may not serve as the movie that propels the sport to new heights. At the very most, Berry’s maiden directorial effort may help filmmakers see a market in MMA films and go deep into making one of their own. Furthermore, Berry could use her experiences from Bruised and concoct a film where the elements fuse together with one element dominating the narrative.

While Halle Berry made this film as she touched on her love for fighting, perhaps she may have been better off restricting herself to either acting or directing and not both. That could have permitted her to look at things from a singular perspective to convey her love for mixed martial arts in a better manner. She had the right ideas but failed to deliver.

Bruised could be a must-watch for fans of the sport as it provides viewers with a basic insight as to how fighters work their way up. Furthermore, fans of sports films may recognize the fickle nature of all the sports they love as that has been captured brilliantly. This Netflix film could have been so much more, but it just never got going. It is a sports drama that doesn’t work as a sports film, nor a drama film.

Bruised is now streaming on Netflix

Befriending Tony from Netflix's 'After Life'