It’s been two months since I watched After Life. Usually, it’s not very difficult to word my thoughts. It could be a tv-series, a movie, a documentary…could be anything. But the keyword here is ‘usually’, not ‘always’. It will be accurate to say that I have been struggling to put words on paper after watching the first two seasons of this show.

This isn’t one of those typical reviews. In fact, this isn’t a review at all. This is me urging people to help themselves out of their miseries, grief, depression…whatever trouble you’re faced with. I know that this is a lot to lay on a two-season tv-show. How can a tv-show do more good than a real-life therapist? I don’t know, but there’s no harm in trying, is there? There’s so much more to After Life than the show just being a part of the list of things I’ve watched this year. Easily one of the best things I’ve watched, EVER. PERIOD.

“Light of my life. She passed away last year. Anything that happens, I go to tell her, then I remember, nothing’s as good if you don’t share it”.

As my protagonist, Tony mourns the loss of his beloved wife Lisa, I start to wonder about the implications of a loss of a loved one on myself. Most of us would take to weeping our days out or going off the radar to undo the pain. Not necessarily in that particular order. Through After Life, some things become crystal clear. Behaviour doesn’t always have to follow a pattern. Not sure if you all have picked up on my previous reference to Tony being ‘my protagonist’. By the end of the second season, it just seemed normal to call him my own, that’s how easy it is to accept the weeping, suicidal, mournful, grieving, depressed Tony, to just make him my own. Easily one of the best characters ever written, that confidently chooses to do away with othering those who go through chronic mental illness.

Related to After Life on Netflix – Tony Soprano – Made in America

My focus through this piece is on Tony, as it is probably already evident by now. Ricky Gervais’s brainchild, this show has become a personal life lesson, a message carved in stone – to be fully aware of the fact that…

“We’re not just here for us, we’re here for others”.

Tony isn’t necessarily your perfect guide to finding love, keeping it, making it your own. But he surely is my best bet at understanding that you are your own champion. You are your best teacher. After witnessing his wife go through a deadly disease and not surviving it, Tony not only makes trauma a part of his being, the kindness that Lisa’s love once gave him starts to ebb. It doesn’t necessarily make him a bad human being, there’s still some empathy left in him but all in all, the man’s become stone-cold, and understandably so. 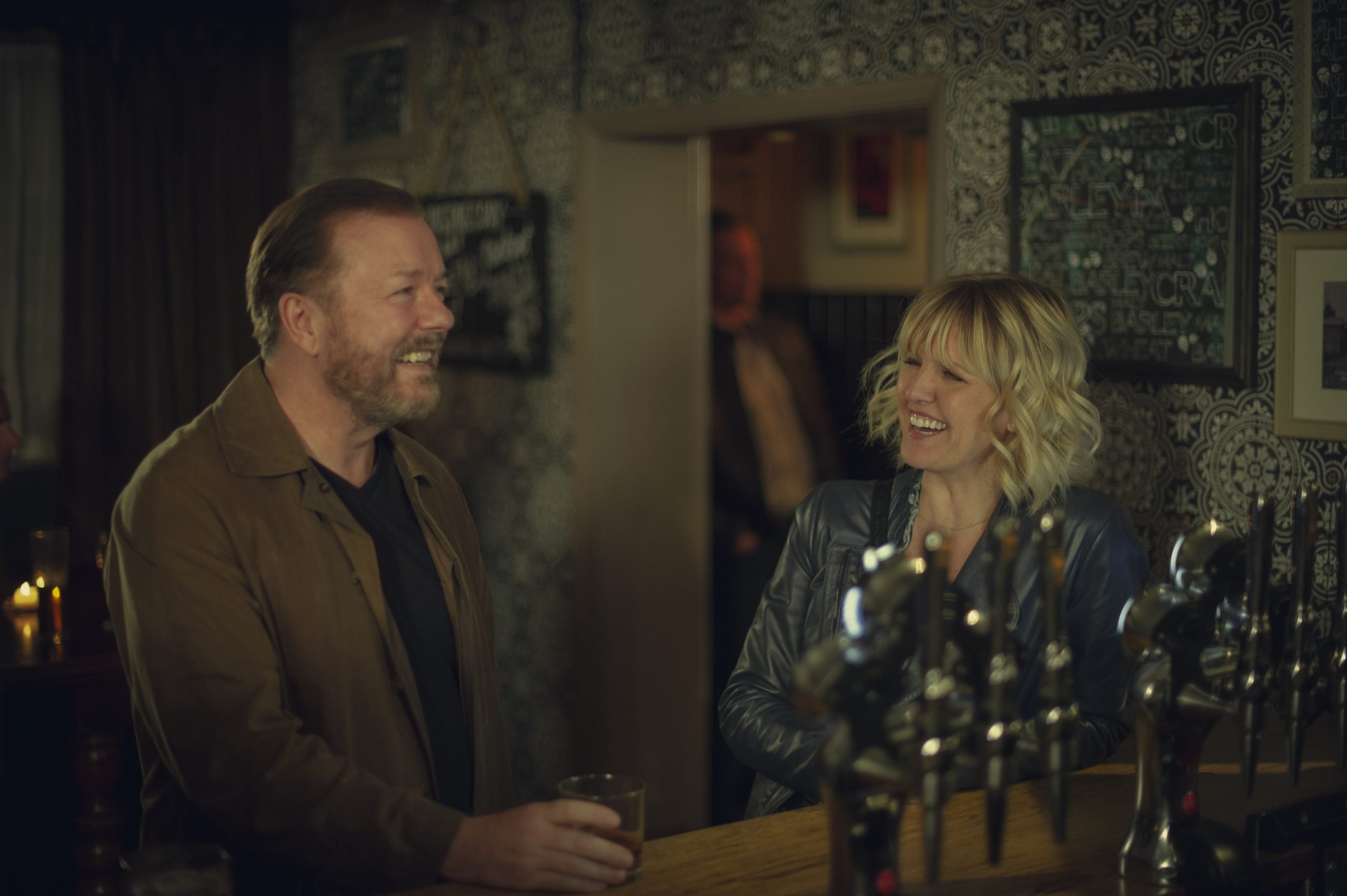 In all probability, this is what makes Tony, two sides of a coin. His justification to anything and everything is: Nothing matters and that he can just eventually kill himself and it’ll all be over.

The following instances make Tony awful with a touch of a kind. This brings us to yet another significant sticky-note lesson to live by. Empathy is never really lost. You just take on new traits as life passes you by but eventually, empathy finds you at your best? Makes sense?

1. Tony’s conversation with the kid at George’s school


At the very start of the first season, this is where his most unfiltered, angry self comes out. Do you really have to be going through the worst to be threatening a child in his own school, with a hammer? Although fans have lived through this moment, they’ve seen past it but we cannot forget how problematic it is?

2. But George loves his uncle Tony

Tony might have scarred another kid at George’s school but always went out of the way for Georgie. And to put it all in perspective, Tony’s vile reaction towards the kid at the school was because he wanted the best for George. He wanted George to be happy at school, instead of standing in one corner, bullied. But goes without saying, that the intention doesn’t white the black. Doesn’t even grey the back, sadly.

3. Tony’s relationship with his father

At first, we see Tony disregard his father’s dementia. The man didn’t really sport much of sympathy to start with and more so when it came to his father. Sarcasm was always his way out and that wasn’t very nice.

4. But Tony visited his father every day, without fail

Through all the recurrent suicidal thoughts and remembering Lisa, Tony always made time to go visit his father. Despite life sucker-punching him otherwise, despite his father having no memory of the passing away of Lisa, Tony frequented his father and that speaks volumes of his vulnerability and state of mind.

Being his unpleasant self, walking through the city as charity collectors approach him, Tony goes bonkers and lashes out at them and that showed that this behaviour wasn’t just meant for some. Tony had just become this person and it took him a while before he could realize it all.

6. But he saved the Tambury Gazette just for Sandy

Personally, I’ve never tried to analyze Tony and why he did what he did. Why he was the way he had become. I think we should leave that be. The thing about this character is, there are only a handful of people that he was consistently nice to and one of them was Sandy. While saving the paper, he not only helped Sandy keep the only ‘job she ever liked’, he helped others have it too. Matt, who had been going through a hell of his own, now had a place to crash at night. And no matter how much Tony cursed his job, it was one of the few things that helped him meet people and have all these epiphanies as we move forward in the show.

7. Tony’s interaction with Kath. His blatant disregard for believers of religion

For those who know Gervais, know that the man speaks his mind through his characters. His beliefs and thoughts are more often than not mirrored through his words. Therefore, in After Life, it’s a pleasant surprise to see Gervais playing a hopeless romantic, so in love with the one woman, he doesn’t see anything beyond her. And truth be told, that kind of love really is rare. But some things never change. Tony’s blatant disregard for Kath’s ideologies and belief in god. The thing is, I don’t think Gervais can make something without at least once reiterating his aggressive atheism. 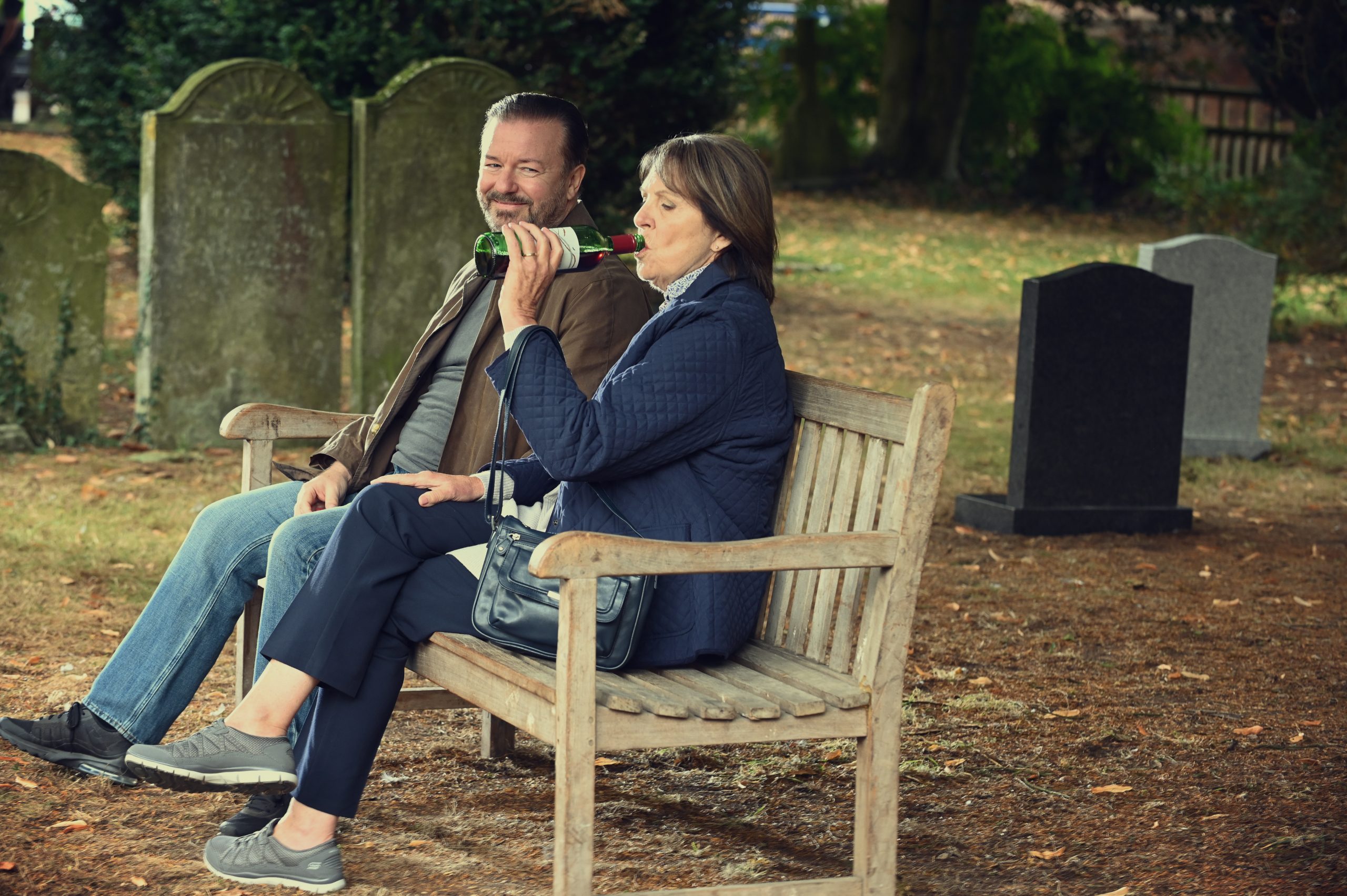 8. His interaction with Anne, at the graveyard

Probably the most wholesome relationship through the two seasons. We don’t see Tony open up to anyone as much as he does to Anne. Sitting on that bench, in front of their partners’ tombstones. At one point, Tony even admits that he should start paying Anne for these satisfying conversations that the two have. And Anne’s response is probably the essence of what the duo share –

“Not everything is about money”

For a slow-burn comedy, After Life is an unflinching and brave take at exploring the unpleasant realities of life. For those who know what it’s like to lose a loved one, I am sure a lot of us see no reasoning in survival after having incurred these losses. Not here to use my privilege of being able to deliver my thoughts on this platform, surely not here to dictate how the world deals with grief. To each their own.

But what I can bring to the table is unfolding a foul-mouthed Tony for everyone to see that it fundamentally makes you more human because of the pain you’re surviving and eventually turning into eccentricity. Use that pathos to your power because it’s yours to deal with. If nothing, we’ll learn to see reason enough in following up our fat tears with laughter and why not allow someone to help you through that?

P.S. Adding a little something in the end here to just say thank you to a friend, who in fact got me to watch After Life in the first place. I owe you one for letting me be, for letting me have my way at a weird time, for knowing the way around my sanity. I know it means something to you, as it does to me. Thank you.

After Life is now streaming on Netflix