Once Upon a Small Town (K-drama), Season 1, Episode 3: Following up on successfully capturing the notorious thief who has been robbing money from people’s houses, the show’s latest episode has taken a new turn. Ji-yul is still trying to comprehend his situation, which feels like it will take him a while to get there. The town continues to bustle with new adventures that always involve everyone in some case or the other. At the same time, the people here now have something more to talk about other than Director Han’s tall & handsome grandson from Seoul. The episode also brings forth new characters and their quirky traits, as they try to handle trivial issues that are usually taken very seriously in small towns.

Here is a detailed recap of the third episode of Once Upon a Small Town. Spoiler alert, please read at your discretion.

Once Upon a Small Town (K-drama), Season 1, Episode 3 Recap:

The new episode begins with everyone gathered in the police station. The thief is found guilty, and the officers file a complaint while checking on the stolen items. While the culprit’s mother reasons with Ji-yul to forgive her son, considering it a mistake, one of the officers claims that the boy has admitted that he stole the money to buy gifts for his girlfriend.

The scene escalates when the leader of the women’s association barges into the police station along with her sidekicks, who would follow everything she says. Soon after learning the boy is a Majeong resident (the neighboring town), she starts arguing with the opposing leader. As we witness the chaotic environment in the police station, we learn that these women have been fighting over municipal support funds for the welfare of their respective towns.

Bringing their feud into the ongoing investigation, they involve Ji-yul and start setting him with the most beautiful bachelor girl in their village. Ji-yul shouts in frustration, seeing everyone get carried away over an impractical point. He tells everyone to leave him alone and leaves the station. Ahn follows him and asks why he always loathes everyone in this town. He says he never mentioned hatred but feels the townspeople are rather nosy with others’ lives. Officer Ahn then enquires if Ji-yul recalls anything from his childhood about this town. Sensing he indeed doesn’t remember anything, she leaves him.

In the following scene, while reminiscing old days, Ahn shares with Sang-hyeon that she only remembers either good or bad memories while growing up. She also feels that people can remember the exact moment very differently. She feels that she has held her lovely memories for so long, even though the other person doesn’t remember anything at all. She also feels that it might be because she has lived too long in the village that never changes. On the other hand, Lee says he remembers everything, and most of his memories have been with Ahn.

We see Ji-yul share his day’s event with his friend back in Seoul. Calling it ‘life is spectacular,’ Ji-yul further talks about how he got rid of officer Ahn whom he thinks is a bit nosy and rude. However, his friend thinks otherwise and says at least he has someone to annoy him. He teases that wherever Ji-yul goes, he always manages to make one or two enemies wherever he goes. Ji-yul understands what his friend is suggesting after immediately realizing his mistake. It seems only his friend could tell all these things because he knows him very well.

The following day, after seeing Ahn and Ji-yul sharing a cold vibe, Seon Dong asks her if they have been fighting. Ahn shares that she wants to avoid him for his good for as long as possible. Since he is in the town for a little while, one should make him comfortable and not nag him unnecessarily.

On his way back from a routine checkup in Majeong, Ji-yul notices Ms. Park (town’s president of the women’s club). She wants to know if Jang Se-ryeon asked her to spy on them. Soon we learn that Ahn’s mother had abandoned her as a child. Overhearing everything and seeing Ms. Park’s words upset Ahn, Ji-yul follows her. When he offers her a lift to the station, she politely declines (sticking to the request he made earlier of leaving him alone.) However, Ji-yul regrets his decision to be rude to her.

After knowing that his grandfather gets the truck from the peach farm owner, he later goes to the coffee place he met Sang-hyeon earlier. While pouring himself a coffee, he meets Ahn (dressed as a civilian). However, their greetings are soon cut short when a lady asks them to help her eliminate the bugs infecting her peach farm. 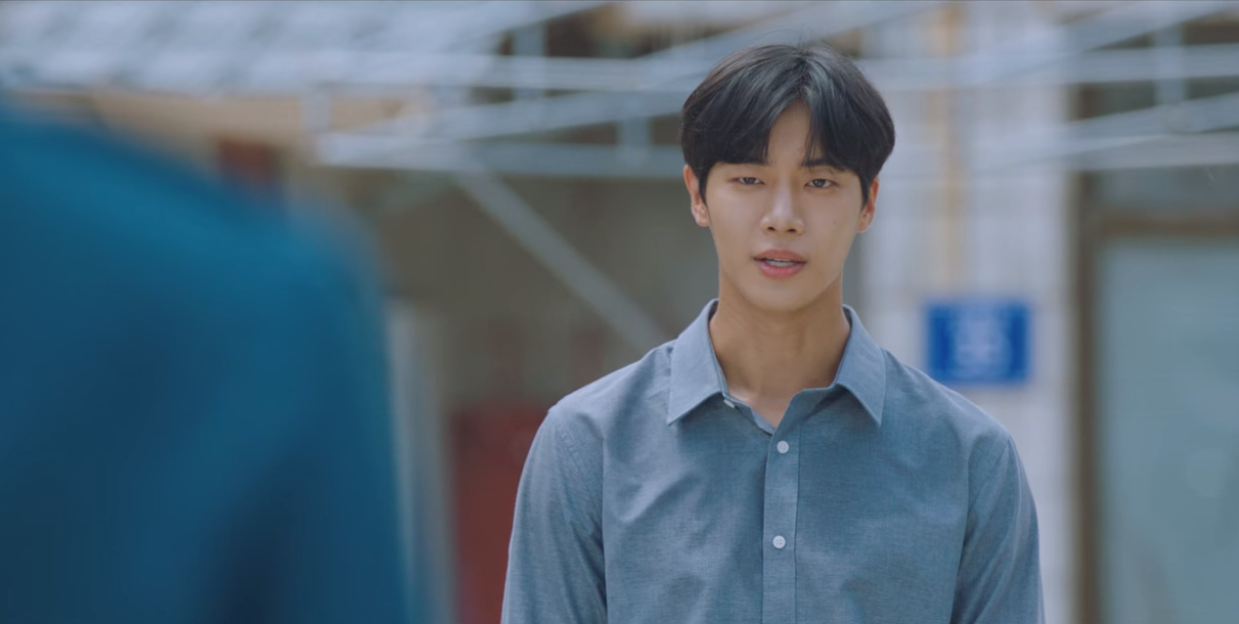 While wrapping the peaches to avoid infecting them, Ahn quietly requests Ji-yul not to share anything that happened in Majeong with Aunt Se-ryeon. She fears if they quarrel again, things will only get worse. Ji-yul shares that he doesn’t want to get involved in town gossip. He further adds that he behaved emotionally the other day; however, Ji-yul understands this village has no boundaries, so he requests Ahn to stop teasing him.

Ahn laughs it off, saying she doesn’t understand him, but Ji-yul can rely on her while he stays here as she is also a police officer. Everyone who came to help couldn’t help but notice their chemistry. While Se-ryeon is pleased to see her niece finally getting happy with Ji-yul around her, Sang-hyeon’s mother coaxes him to make a move as she feels he is the right fit for Ahn. However, Sang-hyeon shrugs off the conversation, saying Ahn is not even interested as she is too busy keeping the town safe. But Se-ryeon assures him that if the right person is in front of her, Ahn will happily change her mind.

Once Upon a Small Town (K-drama), Season 1, Episode 3 Ending, Explained:

Later in the coffee place, when Ji-yul requests Sang-hyeon for the availability of a truck while Ahn asks him why didn’t he ask her. He says he felt he would ask Sang instead if people spread unnecessary rumors. However, Ahn’s aunt jokes that even after encouraging Ahn to date Hyeon, there is a very slight chance of them getting together. At this point, the episode showcases a love triangle where Ahn likes Ji-yul, but Hyeon loves her.

Shortly when the women of the association club leaves, Ji-yul apologizes for the misunderstanding (he assumed Ahn and Hyeon were together.) Hyeon agrees that he and Ahn are very close, but she feels differently. Ahn quickly changes the topic and tells Hyeon how he always wanted to get rid of his truck, so he should give it to Ji-yul instead.

While Ji-yul checks the truck, Hyeon asks Ahn if something happened between the two back in the neighboring town. She denies everything and says she ran into him when she went to check on someone. Since Ji-yul’s grandfather also drove the same truck whenever required, he felt it only be fitting if he purchased it, so his grandfather wouldn’t have any problem once he was back. And even though Hyeon feels Ji-yul is buying the truck to impress Ahn, jealousy takes over Sang Hyeon and he asks for ten million yen for the truck.

Sensing the desperation, Hyeon doesn’t want one penny less and suggests Ji-yul to buy a cheap truck from somewhere else. In the meantime, Ahn makes sense of the situation where her friend has lost his mind asking for so much money from someone who was not ready to take help in the first place. She tries to explain to Hyeon that as the young men’s association president, he should act nicely and help someone in need.

Hyeon is curious to know why she is siding with Ji-yul as he doesn’t even want to talk to people like them. Ahn suggests that she always gets involved in everything about village affairs. When she sees that Hyeon does not agree to her terms, she tells Ji-yul to check for trucks from other towns, and maybe if they went together, acting like a married couple, the seller might give them additional discounts.

As Hyeon doesn’t like the plan Ahn suggests to buy the truck, the boys come to a mutual agreement of four million yen. While Ji-yul happily takes the truck after the purchase, the other two sit by the coffee place. In the moment of truth, Ahn asks Hyeon if he worries that she will get close to Ji-yul. She calls him a child for acting immaturely in front of him. She further shares that when they were 12, Ahn had a secret friend, who turned out to be Ji-yul.

Learning what she is talking about, Hyeon jumps off the van as he understands why she was getting emotional the other night, reminiscing on older times.

Ahn explains that even though it was a great memory for her, her secret friend doesn’t remember anything. And there is nothing she can do about it; hence, it is unnecessary to egg on anything that means nothing to the other person. She understands that he will leave in two months, so she doesn’t want anything to do with him; instead, she wants him to stay comfortable minding his business. Hence, she asks Hyeon to stop pouting over nothing and continue his daily life without getting crazy.

The episode ends with the three characters accepting their new realities. Ahn realizes that her emotions are well-preserved in memories. Hyeon is happy that her friend doesn’t feel anything for the new guy in the town. And Ji-yul regrets not understanding what Ahn meant when she asked him if he remembered anything about this town.

Sweet As (2022) ‘TIFF’ Review: A well-intentioned tale marred by its reliance on genre tropes