“Human nature is a mystery that logic alone cannot illuminate.”

Sherlock Holmes is no longer the fast talking egoistic maniac. He is old and he is losing his memory with every single black dot on a rusted diary. His only accomplice is a little kid who wouldn’t stop till Mr. Holmes completes his memories of the most real case he has had till date.

So Ian McKellen plays an aging Sherlock Holmes whose last great mystery is himself. Bill Condon has made a handsome, tender and beautiful amalgamations of the various layers of human nature. Where the bees and wasps are mere metaphors for the right and wrongs you do in life and the country side is not just a mere getaway, its a learning road to rest your shoulders from the regrets and wrongdoings that life has thrown your way.

Mr. Holmes is a poetic character study of the other side of the Robot detective from Baker Street. Bill Condon’s film presents a picture of Sherlock Holmes that hasn’t graced the screen till date. Its a film that grows on you when its fictionalized emotions come to play. Mr. Holmes is one of the best films I’ve seen this year.

Ian McKellen’s Sherlock Holmes is just what Sherlock Holmes hated about people. While we know deerstalker hat wearing Sherlock Holmes had impeccable observation, tongue-in-cheek humor & numb to human connections, still we loved him because he legitimately was good at what he did. But seems penance of his past mistakes his crept inside the soul of Holmes that makes his soul agitated rendering him to oscillates between remorse and peace. 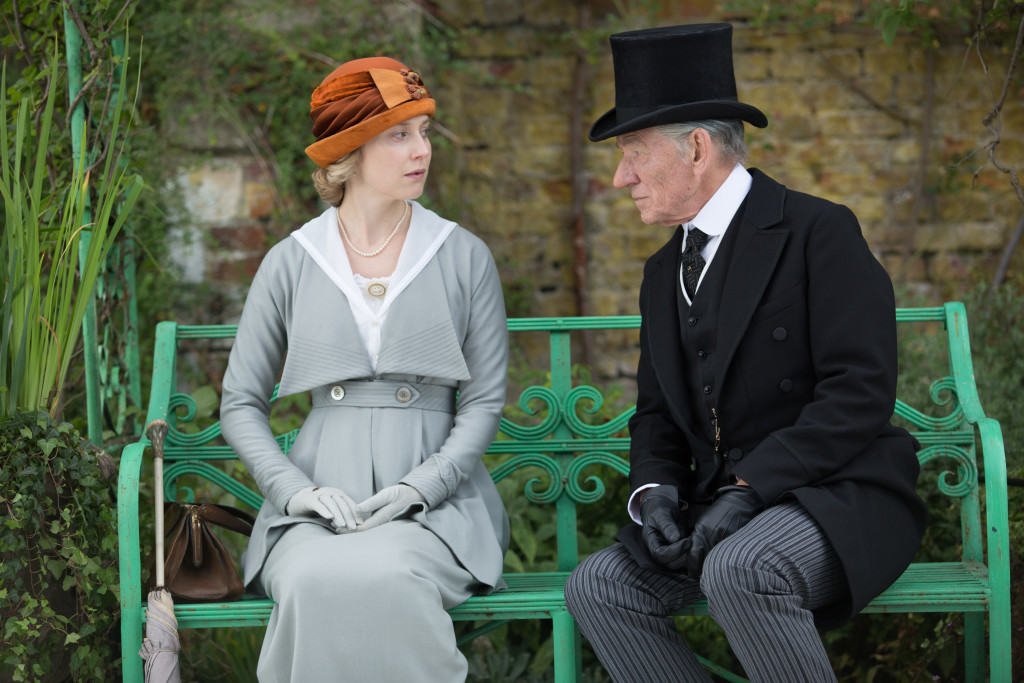 This is the most humane portrayal of the eccentric sleuth you will ever see. He is shown as broken aching soul who is profoundly in deep pain. His face is weathered and weary, eyes looking for answers that lead to his retirement. His last case haunts him and desires an emotional solution rather than a logical conclusion. His deteriorating memory adds to the emotional turbulence as he is in the middle of writing the manuscript of his last case.  He hitches around a cottage in South Downs, and takes enthusiastic son of his maid under his wing. Ian McKellen has given Oscar worthy performance, and he is terrifically supported by key characters that give this film poignant undercurrents. This will be the only time where Sherlock is shown actually ‘caring’ for someone. Mr. Holmes is about how to put your shit together,  it’s indispensable to have human connection & empathy.