Enola Holmes (Netflix) begins in Ferndall Hall, home to Enola and her eccentric and progressive mother Eudoria (Helena Bonham Carter), who mysteriously vanishes on Enola’s sixteenth birthday. Put in the care of her older brothers Mycroft (Sam Claflin) and Sherlock (Henry Cavill), Enola finds her independence threatened as her small world is opened up to new forces.

Mycroft wants to enroll her in a finishing school, but Enola has no desire to be a proper lady. She refuses to be bound by rigid gender norms, having been told for years that she would excel on her own. Following a string of clues left by her mother, she runs off to London, and shenanigans ensue.

Unlike many mystery flicks, Enola Holmes (Netflix) makes you privy to the inner workings of the protagonist’s brain without patronizing you. The fourth wall breaks will reel you in, making you feel like you’re in on something truly special. They are the funniest and most earnest I’ve seen since The Emperor’s New Groove and Fleabag (which is also helmed by Harry Bradbeer).

As we follow Enola, we learn that her quick wit and deductive skills parallel her brother Sherlock’s. But also that our fiery young detective has much more at stake. She must find her mother, avoid being caught by Inspector Lestrade (Adeel Akhtar), and help her new friend Viscount Tewkesbury (Louis Partridge) escape an assassin on his heels. Ignoring her mother’s advice not to be thrown off-course by other people, especially men, she forms a sweet camaraderie with the teenager who also hopes to stray from the path he is being pushed toward. 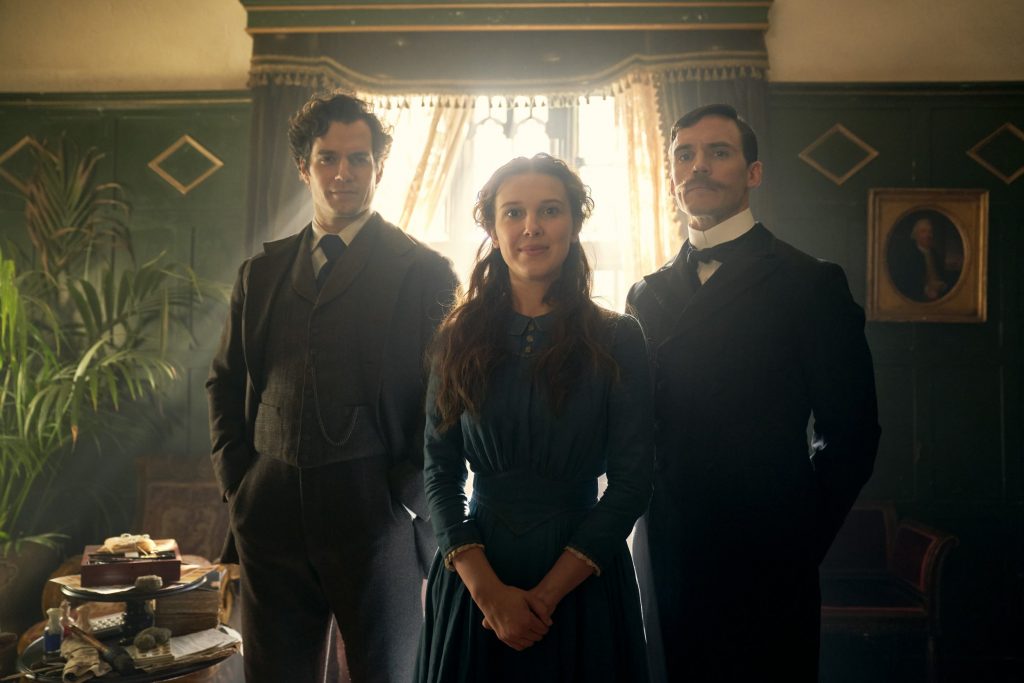 As if all of this isn’t enough, she is coming of age in a changing Britain — the House of Lords is about to vote on a reform act that, if passed, would expand voting rights. Tensions are rampant between “new thinkers” like protofeminist Eudoria and traditionalists who prefer the comfort of the country’s old ways.

Also Read: What Do We Know About Sherlock Holmes 3?

Enola has to reckon not only with who her mother is but also with herself. Who is she? Who was she brought up to be? Who can she be in a society that doesn’t approve of her rowing against the tide? This seems incredibly overwhelming, but Enola is scrappy, always keeping us on our toes as we root for her.

As we see the gears of her mind start to turn earlier in Enola Holmes (Netflix), she says, “bear with me.” We do far more than that because it’s impossible not to when you’re watching Millie Bobby Brown. She shines as the spunky and charming Enola, and let me just say, it is such a joy to see her step out of her Stranger Things shadow. She is a good match for Cavill and Claflin as Sherlock and Mycroft. I admit I was skeptical about Cavill, but he is a breath of fresh air in his minor role.

Also Related: Why Guy Ritchie Is Above His Mediocre Filmography

Unlike past portrayals of Sherlock, he gives us a glimpse into the character’s emotions (unfortunately, the Conan-Doyle estate is not too thrilled). We get to see a bit of Sherlock’s well-known sharp mind and reputation, and also his care for Enola and his humility. He is complemented by a delightfully versatile Sam Claflin as Mycroft, the haughty and chauvinistic brother who hopes to control Enola and save the family name.

There’s something to be said about the stories of young adults and their gumption that always leaves us hopeful. They are not to be underestimated, especially as free thinkers and active participants in society. Enola Holmes (Netflix) isn’t meant to be a deep dive into today’s context, but it is timely, witty, and approachable.

As I watch it, I am grateful for the things that have changed and all the more incensed about the realities that still demand change. Much like the film’s new thinkers, many of us want to work toward what could be rather than settle for what is. Enola leaves us with an important reminder, “My life is my own and the future is up to us.”

"Good morning, and in case I don't see ya: Good afternoon, good evening, and good night!"

Aakanksha is a writer and an aspiring film critic. Stories make her heart soar like nothing else, and she loves learning from them. If she had to pick a favorite genre, it would be dark whimsy. In her free time, you will find her listening to music, curled up with a book, or working on her blog.