Shining Girls (Season 1), Episode 4 Recap and Ending Explained: Shining Girls starring Elisabeth Moss entered its second week of streaming. Unlike the previous three episodes, which were largely cryptic, the fourth one takes the viewer a few steps further towards solving the mystery at the center of the narrative. While many of us would have surmised the genre of the show from its trailer, the impressive way the creators unfold the story becomes the highlight of the show. The direction finds an outstanding balance between the emotional investment in the characters as much as in suspense.

The 4th episode of Shining Girls, streaming from May 6, 2022, is titled ‘Retribution.’ In this episode, the script investigates the criminal case at the core of its narrative a little further. While we had seen Dan (Wagner Moura) and Kirby (Elisabeth Moss) working on the case together, the 4th episode shows the news story being presented for publishing. Dan explains to his colleagues the amount of evidence that he has found connecting different victims of molestation and this evidence, making it a case of a serial offense. He mentions that the source is a victim (Kirby) who does not wish to disclose her name. Later, Abby (Erika Alexander) tells him how the story would not be credible without citing a source.

In the last episode, we saw how Kirby had recognized the voice from the recording at Julia’s house as her killer’s. Now, taking those recording tapes with her, she goes out to an audio expert with Marcus (Chris Chalk). While listening to these tapes, they notice a noise coming from outside and make some observations about the time or the place when it may have been recorded. They also see an echo coming from these tapes. Meanwhile, they realize that the killer is playing a recording of some words before Julia even says the words. That leaves them even more confused while hinting us (the viewers) more toward its time-bending thematic aspects. 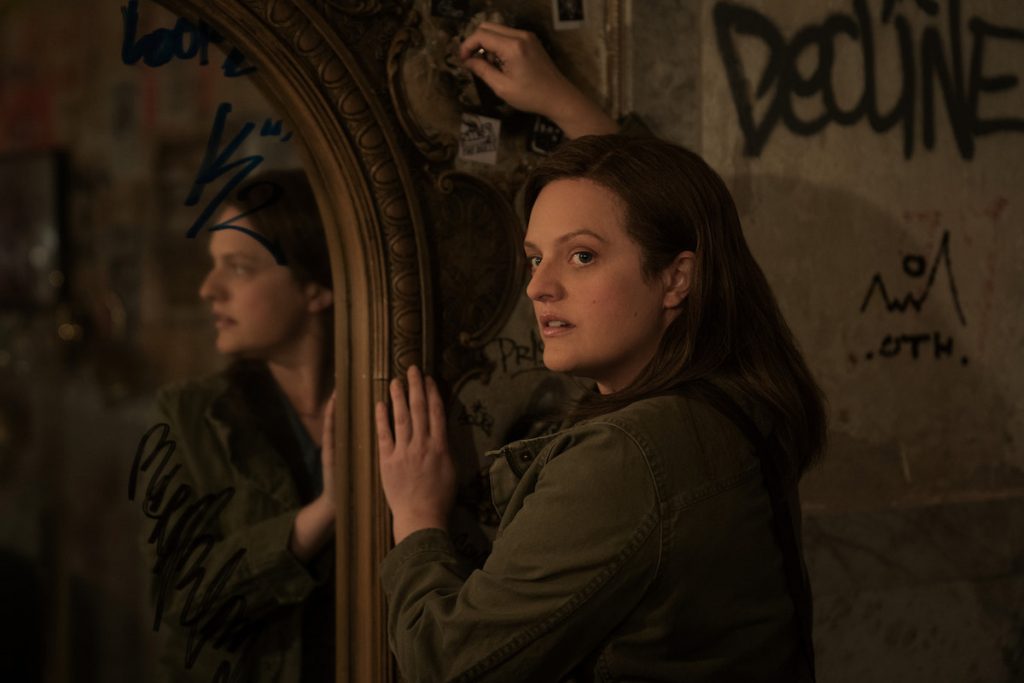 Marcus and Kirby leave the place and start speaking about their confusion revolving around the tapes. Marcus shows concern towards her situation and wishes to help her navigate the details of this case. They visit a place from her past where her rockstar mother (Amy Brenneman) used to be for the most part. While going through this abandoned music venue, we travel through her memories and see her mother speaking with her bandmates. Kirby (Sharone, from the past) enters that particular room and notices something (Sharone’s gone, like the smoke) written near the mirror. She (from the present) realizes that these lines were written by her attacker (Jamie Bell).

Meanwhile, Dan does some leg work to understand the story of other victims. While speaking with a woman about her then partner (one of the victims), Dan notices a link connecting the said victim to the evidence that was found. When Marcus and Kirby come into the office, Dan brings her to the conference room to showcase his discovered evidence. They realize that the killer has taken a piece of an object from one victim and placed it in the body of someone else. This shocking discovery leads them closer to making the killer a connecting link between all the criminal cases.

Afterward, Kirby decides that she wants to be the face of the story and her name be shared as the source and the victim. The story gets published in the Chicago Sun-times with her being the face on the top of it. Meanwhile, she realizes one person (Jin-Sook working in the local planetarium) is still alive despite the evidence that she and Dan had found. She mentions to Dan that she thinks Jin-Sook (Phillipa Soo) is connected to this chain of victims and goes to meet her. She visits her at her house and advises her to stay with her friends and family and stay protected from any danger. She does this out of sheer concern for Jin-Sook.

Towards the end of the episode, we see Kirby outside Laundryland – the laundromat on the address the same as the matchbox left inside her body by the attacker. She enters the laundromat, wanders around, and finds a few matchboxes (similar to before). While she is thinking about it, Harper enters this place and starts firing questions at her. Since he finds that she has changed her identity from Sharone to Kirby, his questions showcase his curiosity about his observed changes. He asked these questions to startle her and make her frightened of his sudden appearance.

Kirby remembers him as the person who had given her the toy horse (Pegasus) when she was a kid and finds it surprising that he still looks very much the same. He attacks her and tries to strangle her while she takes off her knife and attacks back. During her struggle to let go of his grip on her throat, the wall in her background keeps changing. The laundromat soon becomes a glass wall; they break it and fall through to the other side. She gets out of this place, runs off towards the road, and looks back. Now, she finds it to be Bee Happy Bar, populated like any other day.

Along with the entirety of the episode, this part of the episode takes us closer to the time travel aspects, and sudden, disorienting time shifts create an exciting thriller, both individually and collectively. It links the past, present, and future like a confounding puzzle and keeps us on our toes to learn more about the reasons behind the strange occurrences in the narrative. It puts forth a few more cards from the deck and takes us a bit further on the journey towards the revelation.